President Trump’s opposition to Bitcoin and cryptocurrencies is well documented as is his determination to maintain the US Dollar's global status. According to a passage from ex-national security advisor John Bolton’s book—Trump’s administration has actually handed Bitcoin and Ethereum a huge advantage over other cryptocurrencies.

John Bolton’s book, The Room Where it Happened, is the gift that keeps on giving for CNN and MSNBC as they finally have something more than a ghost hunt on their hands in their never-ending assault on Trump. The book so far has revealed betrayals by the President, conspiracy about Russian and Chinese influence, and plenty of examples of Trump behaving in a less than intelligent manner.

Bitcoin and Ethereum also came up in Bolton’s book—again with surprising revelations. 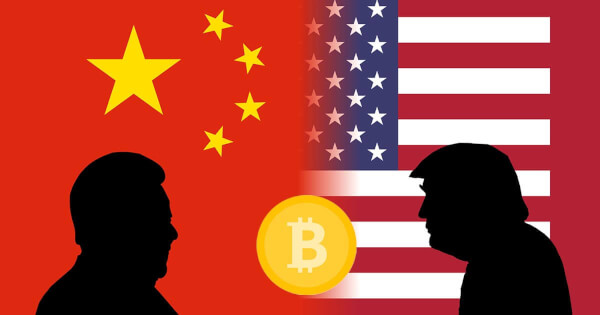 “I am not a fan of Bitcoin and other Cryptocurrencies, which are not money.” President Donald Trump tweeted on 11 July, 2019. In one of his infamous Twitter threads, the President blasted cryptocurrencies and Facebook’s Libra project and warned against unregulated currencies while also highlighting how important the US dollar is, and must remain, to global trade.

While this may have been the first time Trump’s millions of Twitter followers had heard of his distaste for Bitcoin—according to Bolton’s soon to be released memoir of his time in the Oval office, the President has been wary of cryptocurrencies for quite some time.

According to the Washington Examiner’s obtained excerpt from John Bolton’s book, Trump’s dislike of Bitcoin can be dated back to May 2018, when the President criticized the Treasury Secretary Steve Mnuchin’s approach to trade negotiation’s with China.

“Don’t be a trade negotiator,” read the comments from Trump to Mnuchin, “Go after Bitcoin (for fraud).”

Mnuchin allegedly replied with some reprehension, “If you don’t want me to trade, fine, your economic team will execute whatever you want."

Despite China banning all cryptocurrency exchanges from operating in 2017, making it illegal for Chinese mainlanders to exchange digital currency unless they operate offshore—Bitcoin remains a huge part of China’s future plans. China has the largest Bitcoin mining ecosystem in the world responsible for the lion’s share of the network’s hashrate.

Hash rate refers to the measure of computing power linked to Bitcoin’s network and determines the ability at which a miner can produce new coins.

A Bitcoin mining map released by the University of Cambridge published last month, revealed that 65% of the world’s hash power comes from China, while the US is a  distant second place, only accounting for 7.24% of the global hash rate.

So why does hash rate matter? While the majority of China’s mining is facilitated by companies like Bitmain, a privately owned company headquartered in Beijing that designs application-specific integrated circuit (ASIC) chips for bitcoin mining, there really is no such thing as a private entity in China that is beyond the influence of the government.

In blockchain networks, the 51% Attack Rule refers to a situation where an entity gains control of more than 51% of the total computing (hashing) power within a blockchain network. The protocol of a blockchain system validates the record that is backed by more than 50% of the hash power—meaning the attackers could then direct the blockchain to reverse transaction confirmations on the Bitcoin they spend, allowing them to double spend their own Bitcoin supply.

As China has control of over 51% of the Bitcoin network, China could dictate the terms of the blockchain. They could direct Chinese miners to enter malicious blocks onto the chain, ban certain payments, reverse transactions and generally be able to perform 51% attacks on the blockchain network at will.

How did Trump Make it Worse?

While Trump made few public claims on the pioneer cryptocurrency prior to 2019, from the excerpt it does appear that he was already aware of China’s control over the Bitcoin network and their ever-tightening grip over bitcoin and ether mining.

While Bolton says that Mnuchin never did go after Bitcoin, he points out that Trump and his administration actually gave both Bitcoin and Ether something of a pass with the regulators, particularly the Securities and Exchange Commission (SEC).

In June 2018, the SEC’s Director of the Division of Corporation Finance Bill Hinman announced a new and unexpected policy towards Bitcoin and Ether.

Since the ICO boom of 2017, the SEC has maintained that the majority of cryptocurrencies sold were in fact unregistered securities. But in Hinman’s 2018 address he said, “As with Bitcoin, applying the disclosure regime of the federal securities laws to current transactions in Ether would seem to add little value.” Hinman explained that perhaps Ether and Bitcoin had once been securities but were now regarded as fully decentralized from any organization.

Bolton reveals in the excerpt from his book—that at the moment of Hinman's announcement a man standing next to him showed Bolton his Coinbase account which revealed that the Bitcoin price had immediately begun to rise.

A few months later in November 2018, the SEC published a “Statement on Digital Asset Securities Issuance and Trading”—which basically further divided the crypto community off into three groups: the statement drew attention to those who had violated securities law; effectively gave Bitcoin and Ethereum a pass as decentralized entities, and ignored all other viable projects like Cardano, EOS and Litecoin.

The aim for Trump in this matter appeared to be to create a rigid regulatory framework for Bitcoin to operate within, but inadvertently he gave Bitcoin the only regulated framework to operate within—making an easy choice for developers when in search of a cryptocurrency with which to experiment, and further drove the profitability of maintaining the network for China's Bitcoin miners.

Trump Invites the US Dollar's Doom

The inception of cryptocurrencies like Bitcoin, which, was essentially built to potentially destabilize and displace the central source of power for our governments—their control over traditional financial systems and monetary issuance—has been a growing concern to the United States.

The second threat to US dollar dominance is the Chinese Yuan and currently, both are locked in a race to achieve a working digital currency—a Central Bank Digital Currency (CBDC) that can transact like cryptocurrency but is still controlled by the respective sovereign nation.

It is clear at this moment, that China leads the CBDC race as they are actively testing their digital currency, or Direct Cash Electronic Payment (DCEP) as they call it, in several provinces and with large organizations. On the counter-side, the Digital Dollar project has not gone beyond rhetoric.

By providing a clear framework for Bitcoin and Ethereum and nothing else, China now has overwhelming control of Bitcoin’s future, as well as a soon to launch digital Yuan.

As the race for dominance in a digitally financed future heats up, Trump’s attempt to stifle Bitcoin to hurt China may end up spelling doom for the US dollar once and for all. Whether the digital Yuan comes first or Bitcoin should replace our global financial system—the future is firmly in China’s hands.