Matrixport is a Singapore-based cryptocurrency startup which was launched by former Bitmain CEO Jihan Wu. Established in July 2019 with the goal to offer over-the-counter trading, lending, custody and investment services for crypto, Matrixport boasts a systematic security model, global distributed infrastructure and business-focused security innovation capability to assure the security and reliability of users' assets. 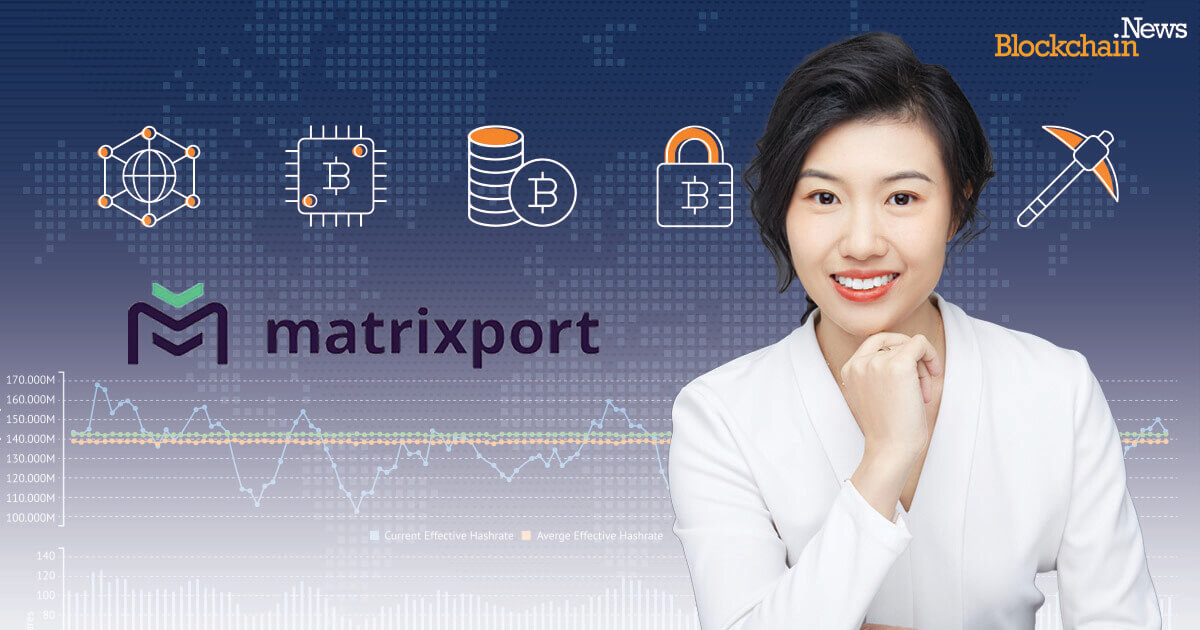 Cynthia Wu is the Head of Business Development and Sales at Matrixport where she is also focused on overall sales strategy and managing Matrixport’s key investor relations.

In this first part of our exclusive interview, Wu shares her insights with Blockchain.News on the state of the Bitcoin mining, the surge in Bitcoin’s Hashrate and the potential impact that the coming Bitcoin halving will have on Bitcoin miners.

Matrixport is a spin off business from Bitmain, a privately owned company headquartered in Beijing, China that designs application-specific integrated circuit (ASIC) chips for bitcoin mining. Having been established last February, the Singapore-based Matrixport is more than one year into its development.

Reflecting on the impetus behind the launch of the spin off business, Wu said, “Before the spin off, we had already established the foundation for Matrixport’s fundamental services within Bitmain, such as OTC trading and the custodian infrastructure.” She explained, “So although Bitmain offered these services, we wanted to establish Matrixport as a one-stop financial services provider for custody trading, lending or investment products and payments to a wide spectrum of users. It could be crypto miners, that's where we came from and we have our legacy there, but also to financial institutions, family offices, new vendors and exchanges.”

Bitmain has been a very successful business since its establishment in 2012 and is a leader in mining product innovation providing price competitive hash power to the Bitcoin mining industry. Wu highlighting Bitmain’s important role in the overall Bitcoin market, “ By supporting the mining ecosystem, the entire digital ecosystem has grown along with the Bitcoin network which has become more secure than ever before.”

Despite the leading position and market loyalty that Bitmain has achieved Wu explained, “We have identified that cryptocurrencies supplied to the market such as Bitcoin and altcoins are becoming more and more an alternate investment asset and have been gradually gaining the attention from the large investors and also mainstream financial markets.” She added, “There are additional needs such as secure custody of assets, and liquidity provision to facilitate the buying or selling of crypto, lending and borrowing needs, as well as a need to hedge and invest via derivative products. These financial needs are more universal than just the needs of miners. As this type of asset class grows, we believe that the need for direct services are going to be growing exponentially as well. This was the impetus behind Matrixport.”

In blockchain networks, the 51% Attack Rule refers to a situation where an entity gains control of more than 51% of the total computing (hashing) power within a blockchain network. The protocol of a blockchain system validates the record with the longest transactional history. If the attacker has more than 50% of the hash power, they will have the longest transactional history. This means that their incorrect blocks will become validated as far as the network is concerned. The entity could then create fraudulent, yet valid transactions records. These records might not include previous payments and could allow double spends of BTC. Smaller networks are especially vulnerable to a 51% attack but how is the health of Bitcoin’s blockchain - cryptocurrency's largest decentralized network?

Wu shared, “For Bitcoin’s network to remain healthy you basically need a lot of mining power in its network, because the higher the hash power in the overall network, the more costly it is to even attempt a 51% attack.” She explained, “The hashrate is getting volatile in 2020 by far. In January to early March 2020, we have seen a strong growth in bitcoin network hashrate by 30%, rising from 100E in January to 133E in peak on the 5th March. We have seen new miners and existing miners take up additional hash power during the first quarter of 2020. Then we saw the big landslide of bitcoin price on 12 March, and from there hashrate also quickly dropped as a result from the peak to a trough of 85E (36% drop) on 20 March and now gradually stabilizes back to the January level. The performance on the difficulty level follow a similar pattern.

In May 2019 this year, the Bitcoin network is set for the halving which will increase the difficulty of mining and reduce the mining rewards collected by those who achieve ownership of the block by half - 12.5 BTC to 6.25 BTC.

While this event has historically sent the bitcoin price into a bull run in the aftermath of the halving, what effect will it have on miners and the all-important hash rate?

In the wake of the Bitcoin halving Wu anticipates that, “The hash rate power in the network is going to gradually and mildly increase. But I think most of the increase has already occurred over the last few months and there was a drop after the recent price shock. If we don’t see further major price correction before halving, it is likely to get back to 110-130E by the time of halving Since the daily block reward is going to be reduced by half, after the halving, and that will drive some of the high cost miners out of business as they will no longer be able to breakeven or mine economically. After that, I believe we will see this hash power in the network gradually decrease until the network finds a new equilibrium.”

Mining a proof-of-work blockchain like Bitcoin usually requires a huge amount of power and currently the most preferred way for miners to generate that power efficiently is through hydro power. Wu said, “Hydro power is abundant in the South West of China and is still the lowest cost of sustainable power for mining.”

Hydro power tends to become abundant starting in May, and last during the summer season, so abundant that for some miners the costs may be close to zero. Wu stated, “The peak season for Hydro power will coincide with the Bitcoin halving in May, so I think it's going to be fine for most Chinese miners who have access to hydro power and it will dampen the effect of the halving because they can utilize very cheap power for a few more months.” She added, “I think the real impact is going to kick in when the summer ends - when the hydro power diminishes - that when miners will normally relocate their equipment to fossil fuel power plants which are of higher cost and that’s when you will start to see certain people unable to sustain their mining operation. We will also see a lot of old machines being phased out for this reason as new mining equipment is much more power efficient.”

As mining is not restricted to Bitcoin, Wu shared some of the other cryptocurrency favourites among the miners. She said, “Bitcoin is based on PoW, so BTC miners can basically use their equipment for any PoW coin - the most popular ones are Bitcoin Cash (BCH), BSV and Litecoin.” She highlighted, “Bitcoin is still at the very peak by market cap concentration though.  The absolute percentage of Bitcoin is very high, around 65% of the overall crypto market cap so it’s still extremely dominant.”