Brock Pierce’s run for President of the United States may have come at the wrong time, as the New York Supreme Court today ruled that Bitfinex and Tether must face up to allegations that they concealed the loss of commingled corporate and client funds amounting to over $850 million. 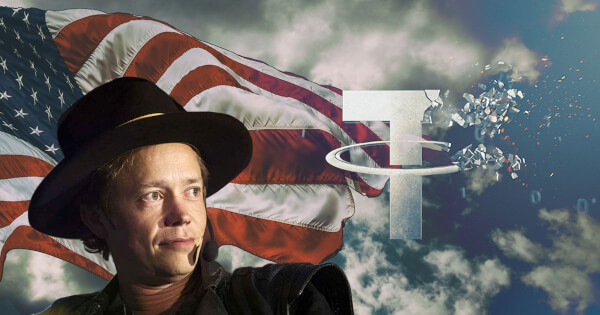 Brock Pierce, who is running for President as an independent on a pro-blockchain platform, is a well-known crypto venture capitalist and the creator of Tether. While no formal accusations of wrongdoing or fraud have been put forward against the crypto entrepreneur, in light of the ruling to face up to the ongoing claims that have been plaguing the stablecoin— it could be argued that Pierce may not be the best ambassador to bring legitimacy to cryptocurrency at this time.

Unlike Bitcoin and other cryptocurrencies, Tether was the first stablecoin which was reported to be backed one-to-one by real US dollars. Pierce helped create the stablecoin to allow more consumer access to the cryptocurrency market because unlike traditional dollars, it can be moved instantly while attempting to cash out a cryptocurrency, while using the traditional banking services can take days—if the banks support the service at all.

The Troubled Tale of Tether

The New York Supreme Court has found that one of the original cryptocurrency exchanges Bitfinex and its related stablecoin company Tether must face up to claims that they deliberately concealed the loss of $850 million in commingled corporate and client funds.

New York prosecutors have alleged that in April 2019—Bitfinex lost $850 million in client and corporate funds, and then used money from its affiliated stablecoin Tether, of which Pierce is the creator, to cover the $850 million in losses.

At the time New York Attorney General Letitia James, who brought the case to light, stated: "Our investigation has determined that the operators of the ‘Bitfinex’ trading platform, who also control the ‘tether’ virtual currency, have engaged in a cover-up to hide the apparent loss of $850 million dollars of co-mingled client and corporate funds. New York state has led the way in requiring virtual currency businesses to operate according to the law. And we will continue to stand up for investors and seek justice on their behalf when misled or cheated by any of these companies."

IFinex, the company behind Bitfinex and Tether previously appealed to the court regarding fraud and taking funds from Tether to cover up the  $850 million loss of funds resulting in the misled of information towards the investors in the state of New York. The NYAG argued that it was too early for the court to address jurisdictional questions during an ongoing investigation.

The New York State Supreme Court denied IFinex’s motion to dismiss the NYAG’s lawsuit that would prosecute Bitfinex under the Martin Act. The court decided that it has jurisdiction to rule over the case.

Bitfinex continues to assert that its funds were deposited with a Panamanian firm called Crypto Capital, and that the funds were seized by government authorities in various countries. The firm claims it has been working to recover the funds allegedly seized by the Portuguese, Polish and American governments.

The attorney general alleges a different version of events, one where Bitfinex handed over $850 million to third-party payments processor Crypto Capital to handle its customers-withdrawal requests. When the company failed to hold up its end of the bargain the attorney general believes the respondents tried to hide the losses—which leads to the allegation that new Tether stablecoins were created without any backing.

What about Brock Pierce?

So what does all this mean for Brock Pierce’s presidential campaign? Well, so far, he has not been mentioned in the court’s opinion—but is he really the man to bring legitimacy to the blockchain and cryptocurrency sector on a national scale with this investigation hanging over his creation?

Additionally, while Pierce is unlikely to win as he is not associated with either of the two major US political parties, his involvement with the first stablecoin Tether may be seen as a conflict of interest to the US Government’s development of a digital dollar—which would be a US dollar stablecoin completely backed by the Federal Reserve.

Should Pierce’s campaign show any signs of progress, the attacks he would receive from both major parties and Bitcoin-hating President Donald Trump could further damage the public reputation of Bitcoin and Crypto—which has unfortunately been viewed by many as simply a means to pay for illegal activities and products.

Regardless of progress, as the Supreme Court’s investigation into Tether heats up, Pierce will most likely be brought in for public questioning which would again muddy his name to the US public who are largely unaware of Tether and Bitfinex’s rocky path through the crypto sphere.