Bitcoin’s status as a safe-haven asset has been under intense scrutiny as the BTC price continues to fall amidst a series of crisis events in 2020 which have continued to create the ideal environment for the digital commodity to theoretically thrive. Beginning with the Iranian - US conflict in early Jan, the coronavirus outbreak triggering a cut in interest rates by the Federal Reserve, and now the plummeting oil price following disagreement in Vienna between Russia and the OPEC nations, by now surely Bitcoin's price should be climbing due to its hypothetical ability to act as a non-correlating market hedge asset?

Markets worldwide have been gripped by growing fears over recent weeks as the coronavirus disruption ground manufacturing in China to a halt causing bearish global ripple effects and decreasing demand for oil. Last night, a break down in the alliance between Russia and the OPEC appears to be presenting as the straw that may break the proverbial camel’s back as oil prices took their biggest dive in 30 years.

The combination of the breakdown between Russia and OPEC and the already anxious coronavirus fueled environment has now facilitated the biggest decline in the stock market since the global financial crisis of 2009.

The biggest stock market drop since 2009

According to a report from CNN on March 9, the New York Stock Exchange halted trading for 15 minutes after stocks plunged more than 7% and the yield on the 10-year Treasury note also hit a record low falling below 0.5%.

The sell-off panic began after Saudi Arabia unexpectedly launched a price war, slashing its own oil prices, in an attempt to retake the global market share. The sudden move by Saudi Arabia followed last Friday’s refusal by Russia to go along with the Organisation of the Petroleum Exporting Countries' (OPEC) efforts to rescue the oil market from the drop in demand caused by the coronavirus outbreak.
President Donald Trump was among the first to chime in via his favourite social media platform, Twitter. The President acknowledged the disagreement between the Kingdom and Russia as the catalyst but also pointed fingers at the sensational or as he would say “fake” news.

Despite a belief by investors that Bitcoin could serve as a tool against currency depreciation, the price of the cryptocurrency has also dipped over 13% since the failure by OPEC and Russia to reach a resolution. In a recent interview with CEX.IO Founder Oleksandr Lutskevych, he confirmed that US investors have been acquiring Bitcoin to hedge against the Federal Reserve’s quantitative easing and UK investors have also been relying on it as a bona fide store of value against Brexit fears.

In an article by Coindesk on March 9, Matt Smith, Director of Commodity Research, ClipperData described Saudi Arabia’s move as drastic and the kingdom’s attempts to bring the Russians back to the table has hurt economies everywhere.

The oil market is currently oversaturated and Smith believes it will be difficult for nations to reconfigure their supply chains to properly address the imbalance.

As Bitcoin has fallen with the traditional markets, Smith believes there is currently no serious interest in Bitcoin as a market alternative. He dismissed Bitcoin’s assumed safe haven status saying, “In times of crisis, all markets correlate.”

Never one to miss out on an opportunity to kick the decentralized currency when it is down, economist Peter Schiff openly mocked the community for their belief that Bitcoin would moon in times of crisis. “The news couldn’t be more bullish. Yet the price action couldn’t be more bearish.” Schiff appears to still be licking his wounds from the onslaught of mockery he received when the price of gold, of which he is a super-advocate, fell immediately following the Federal Reserve's rate cut of half a percentage point.

Schiff immediately received some push back from twitter users on his feed and offered the following explanation. 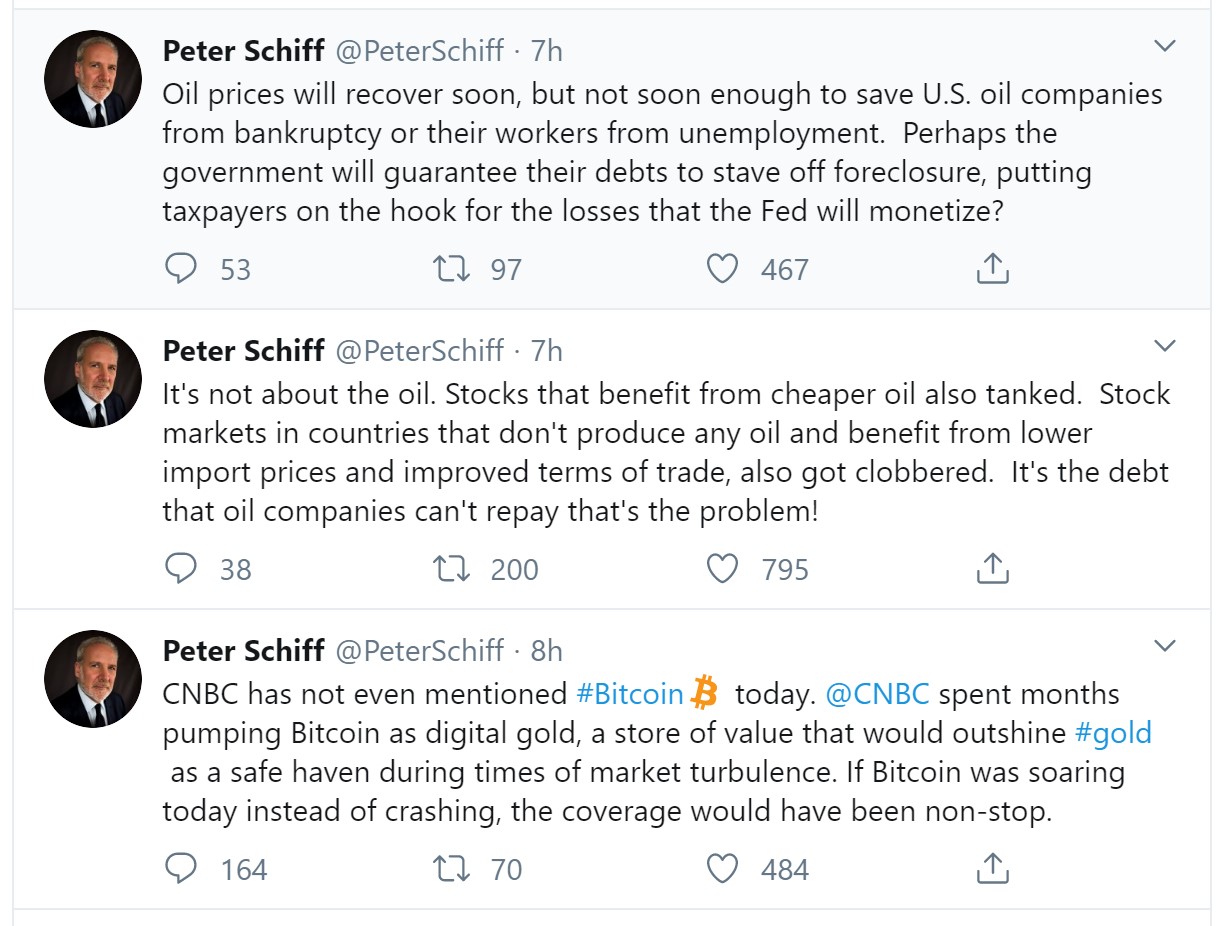 CEO of Coinbase, Brian Armstrong who only days ago openly pondered the fate of Bitcoin while drawing comparisons to the rise and adoption of the internet, seemed perplexed by the bearish movement saying he, “expected the opposite.”

American Bitcoin investor and influential figure in the space Anthony “Pomp” Pompliano, shared a different perspective, highlighting that the stock market had acted with a much higher rate of volatility than BTC. 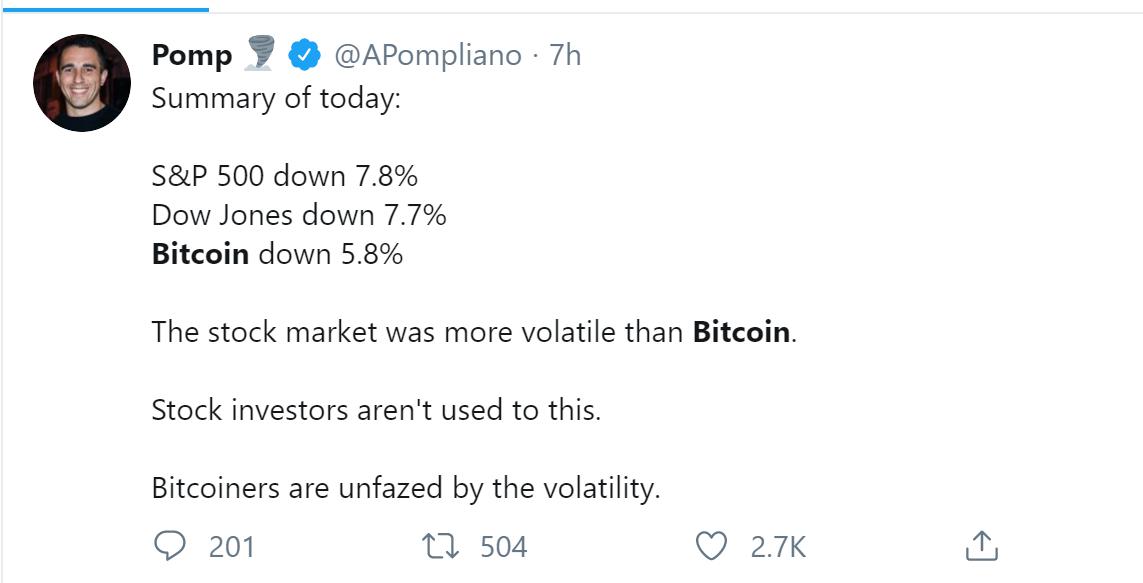 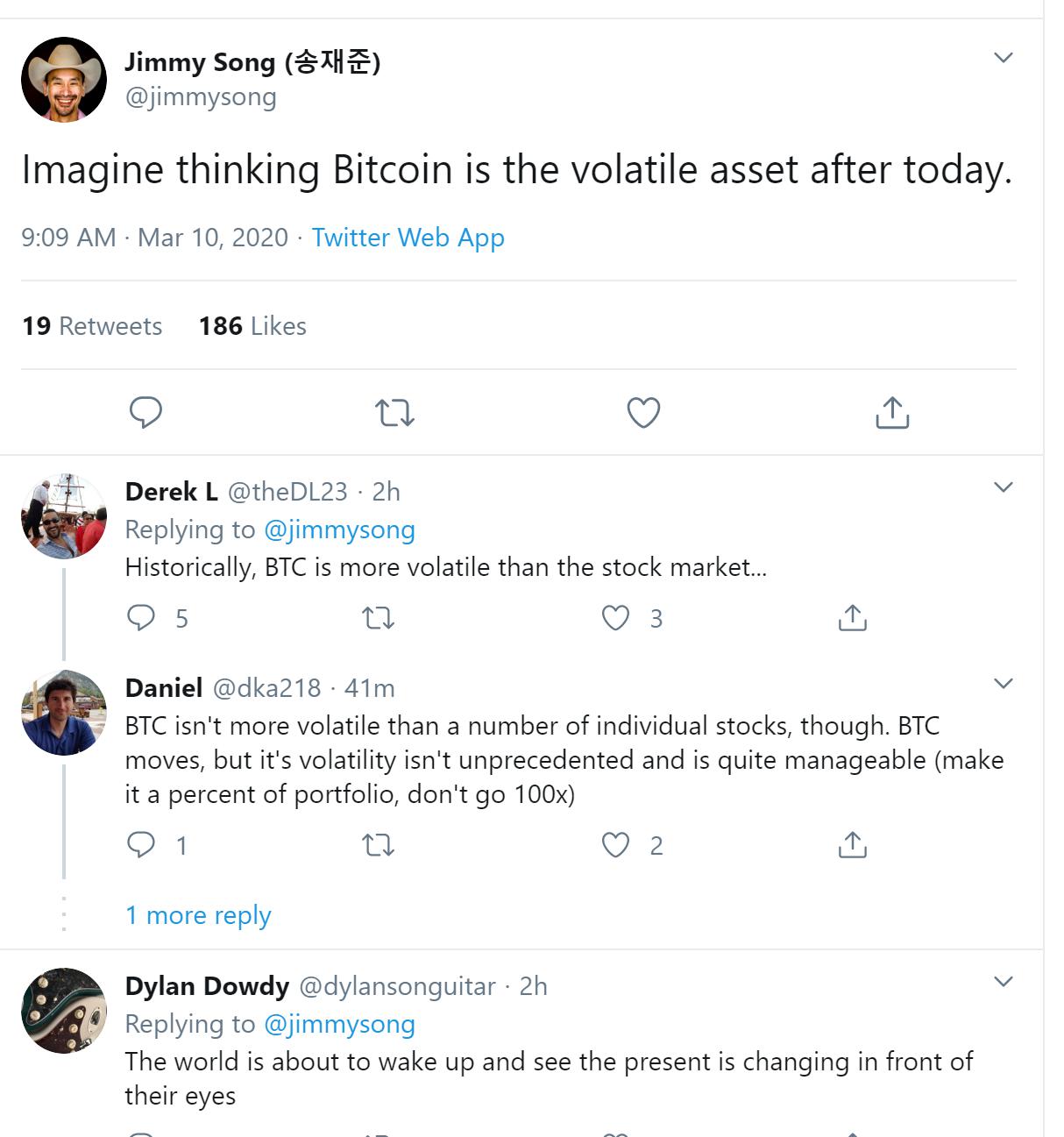 Samson Mow of Blockstream also lent his voice to the cause. He outlined that Bitcoin was actually doing incredibly well in the crisis climate for a “ decentralized apolitical supernational asset” that was worth nothing a decade ago. He even directed his follower’s to a thread explaining why you should continue to buy Bitcoin. 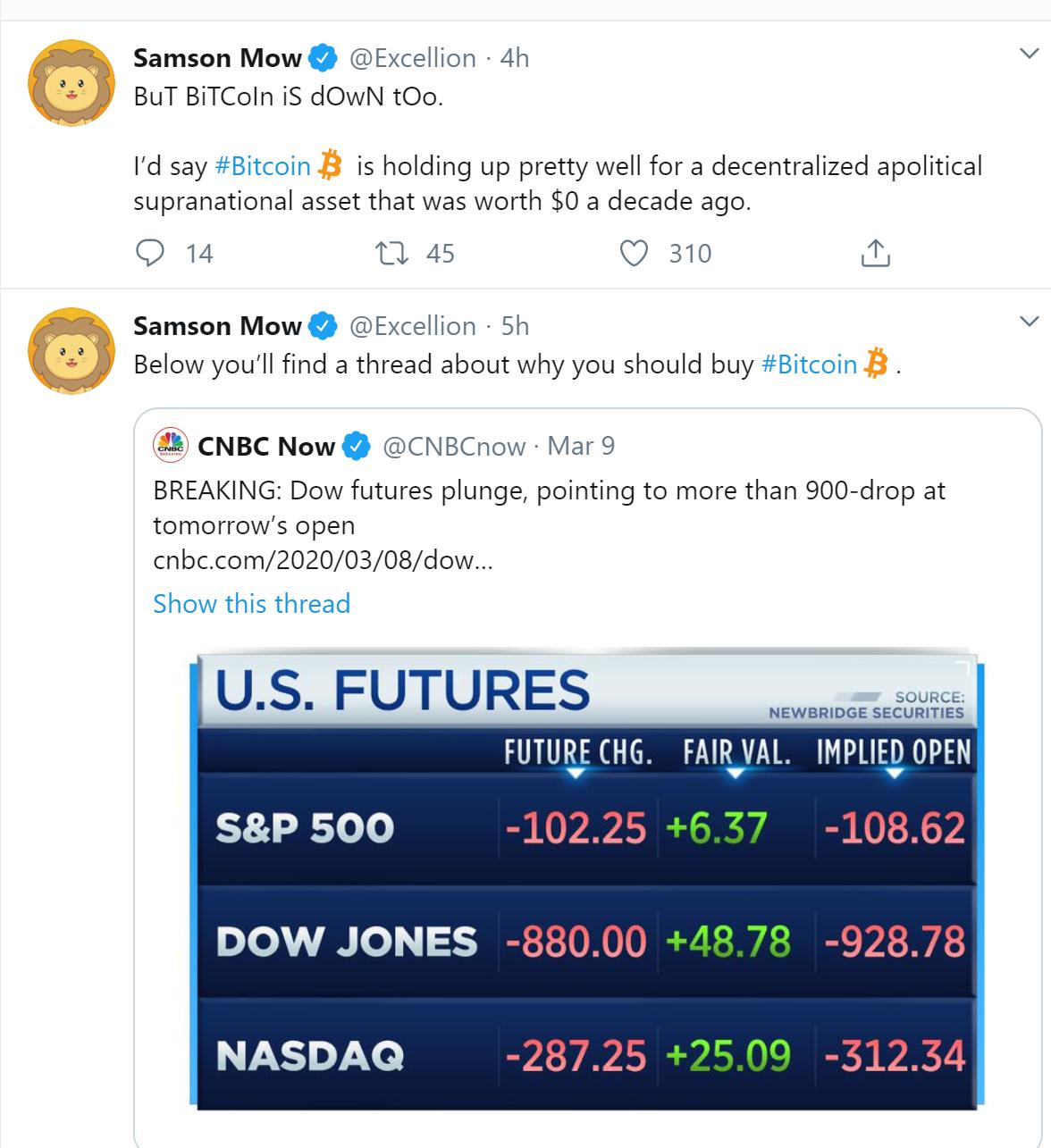 At this point, it would be reasonable to wait and see what happens with Bitcoin. While the news seems dire to some analysts, a drop in 13% for bitcoin could almost be considered business as usual in terms of its usual volatility. The reality is that while it has fallen along with traditional stocks, the damage to the decentralized asset is not nearly as severe which for now leaves Bitcoin's safe-haven status pending as we wait for more information to reveal itself over the coming weeks.