What Is Fueling the Dogecoin Hype?


Dogecoin (DOGE), the meme-based cryptocurrency, seems to have entered mainstream finance with ease, being the latest "hot coin" amid the crypto frenzy. 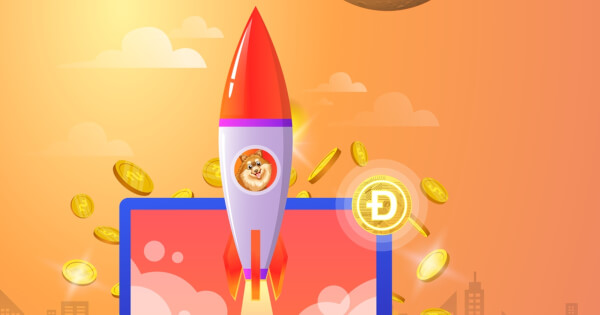 According to Coinmarketcap, the meme coin overtook Ripple to become the fourth-largest cryptocurrency with a market capitalization of $84,098,806,344. The rate of return for this week is very impressive, with an increase of 104.46%. This altcoin has risen 8.08% within 24 hours.

Its value reached $87 billion in Wednesday's trading, surpassing the largest exchange-traded gold fund, and even surpassing stocks such as FedEx Corp. and Snap Inc.

It seems that nothing can stop Dogecoin from aiming for the moon. After all, the market is not always rational. This year's GameStop incident is a very viable example. The stock price of GameStop rose by more than 9,000%.

Tesla CEO Elon Musk tweeted that he will host the "Saturday Night Show" as "Dogefather". Elon Musk will appear on Saturday Night Live this weekend, sparking speculation that he might talk about Dogecoin again in a comedy show, which will once again fuel the Dogecoin craze.

Yesterday, Dogecoin hit a new high and reached a record high of $0.695, exceeding the previous goal of $0.69 set by the doge day 'Dogecoin Army' on April 20. Now, after more than 2 weeks, it has achieved its long-term goal. Dogecoin's final price is $1.00.

When Dogecoin skyrocketed yesterday, Robinhood experienced some technical difficulties processing the surge in transaction volume on its platform.

Although it is difficult to determine the exact reason for Dogecoin's rise, a number of factors have contributed to its increase in value. The sentiment of retail investors is high, with some users popularizing the "#DogeDay" trend on Twitter to push up DOGE prices. 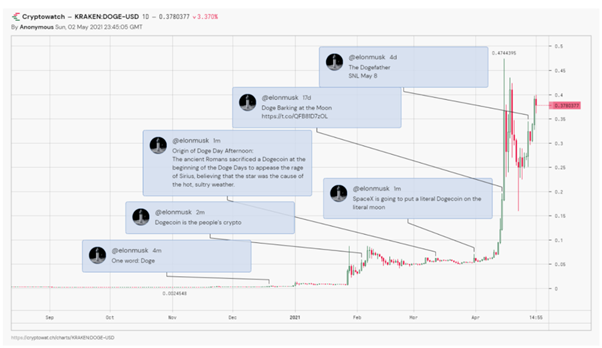 The chart above shows the price trend of the meme-based cryptocurrency every time Musk tweets about it. Typically, DOGE's price surges a bit after each one of the Tesla CEO's tweets. Not only is Elon Musk endorsing DOGE, but other celebrities such as the billionaire boss Mark Cuban has also embraced the joke cryptocurrency. The owner of NBA Dallas Mavericks has integrated DOGE into the NBA by enabling merchandise for the Mavs to be purchased with DOGE. Additionally, the Gemini cryptocurrency exchange, backed by the Winklevoss twins, announced on Tuesday that it will soon enable trading of the token.

Nevertheless, despite the frenzy surrounding Dogecoin at the moment, Galaxy Digital’s most recent report indicated that Dogecoin still has many shortcomings, compared to Bitcoin.

Bitcoin is one of the most active development projects in the digital asset ecosystem, while Dogecoin remains one of the most inactive ones. Dogecoin’s node topology is small and lacks robustness, with most of the network’s nodes unable to remain synced to the tip of the blockchain. However, many think Dogecoin has one simple purpose: to be the world’s most fun currency.