Over the past few days, the cryptocurrency ecosystem has witnessed a mild rejuvenation due to a revival in the price of Bitcoin (BTC).

With the recent uptick, the combined crypto market cap is currently pegged at $1.55 trillion, up by 1.13% at the time of writing, according to CoinMarketCap. While hoarding all digital assets contributes to this figure, Bitcoin dominance accounts for 48.8% of the total market cap.

Bitcoin critics have often maintained that the premier digital currency has a limited utility compared to other cryptos, including Ethereum (ETH). However, the embrace of the digital asset by institutional investors and multinational business entities appeared to have negated these claims.

In the past week, Amazon posted an advert in search of a digital currency expert, a move many believed is targeted at steering the entry of the e-commerce giant into accepting Bitcoin for payments. While Amazon has refuted these claims, many Bitcoin proponents believe that the current trajectory in the BTC ecosystem will eventually make the coin a major part of the payment system by Amazon and other such firms.

Bitcoin price has also been revived by two crucial revelations from Elon Musk, who noted that his privately run firm, SpaceX, also has a Bitcoin allocation. Musk, who initially halted Bitcoin payments for Tesla on account of the cryptocurrency’s excessive energy usage, also unveiled that the electric automaker may soon resume accepting Bitcoin for payments. Musk said this change of mind is based on the fact that the transition to green energy for mining the cryptocurrency is improving.

These and more fundamentals have lent a hand to pushing Bitcoin to retest a new high in a month after surging to $40,816.07 in the past 24 hours.

Following Bitcoin’s impressive run in the past 24 hours, the premier coin is currently seeing extreme volatility around the $40,000 support level. The coin is presently paring off its accumulated gains and changing hands at $39,775.60, down by 0.12% in the past 24 hours. 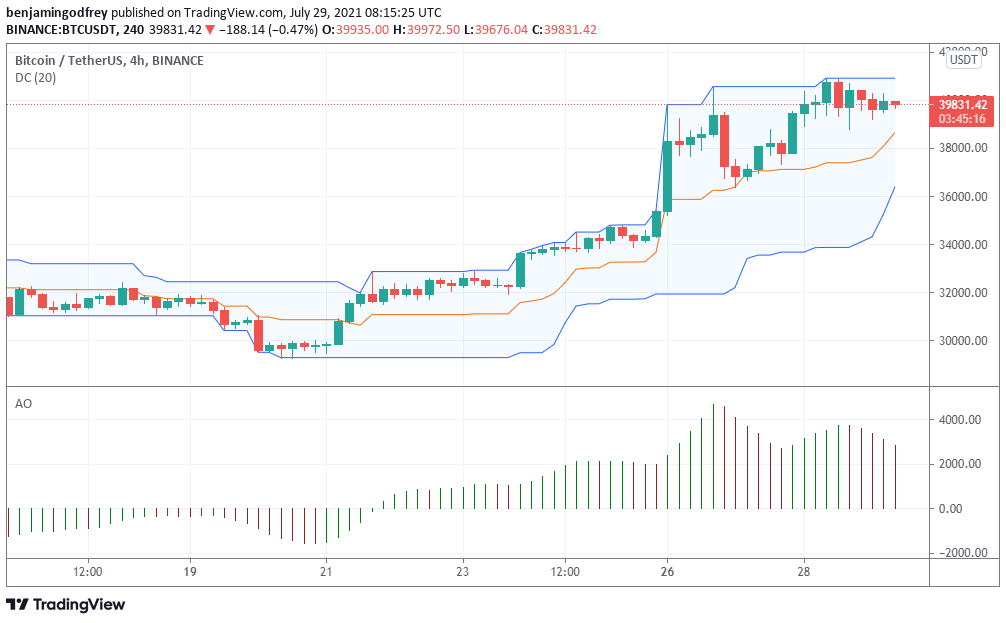 Consider the BTC/USDT 4-hour chart on TradingView. The latest uptrend has seen Bitcoin breakthrough major resistance points, including the $32,000, $36,000, and $40,000 price points since July 20th. Such endless run to the top calls for consolidation as some short-term buyers may opt to take profits. Both the RSI and the Donchian Channels indicators are showcasing the consolidation setting in.

At this point, the strength of the bulls is required to prevent a freefall beyond the $37,000 support zone, noting that a breach below this level can ignite a new sell-off that will push the price lower. However, should the ambition of the past days be replicated, a move toward the $45,000 resistance point may be tested in the coming weeks.