Crypto Mom, Hester Peirce has been nominated for a second term with the US Securities and Exchange Commission (SEC) as one of its five commissioners. 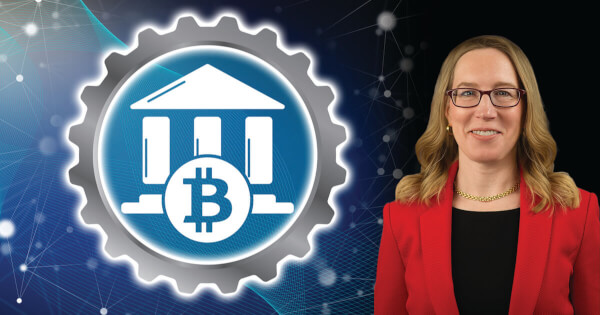 Peirce has proved to be somewhat of an ally of Bitcoin and blockchain projects that come before the US SEC regulatory body. She took office in January 2018 and received a nomination to finish the last two years of her term from US President Donald Trump. Peirce was originally nominated by former President Obama in 2015 to fill a Republican seat, without Trump’s second nomination her term would have ended on June 5.

According to Bloomberg Law, Peirce has now been nominated for a  new term that could see her remain as a SEC Commissioner until 2025.

A Harbour in Regulatory Tempest

Despite well-documented uncertainty between separate regulatory bodies on how to classify digital assets, within the US blockchain and crypto space, the SEC has maintained that digital assets likely fall under US securities laws. The SEC has punctuated this stance through enforcement against high profile projects like Telegram and EOS provider, Block.One who was fined 24 million dollars for its ICO offering.

SEC Commissioner, Hester Peirce has been a breath of fresh air to the sector and has earned the moniker of “Crypto-Mom” for her bold attitude towards digital innovation.

As reported by Blockchain.News, Peirce recently doubled down on her previous suggestion to provide decentralized network developers a safe harbor and even submitted a formal draft proposal.

The safe harbor proposal recommended that a three-year reprieve from securities law should be granted to developers and projects that can demonstrate they are raising funds and making progress towards an open-source network.

Crypto Mom: A Leader Not a Follower

Peirce earned the nickname of ‘Crypto Mom’ when she spoke out and highlighted parameters that were set and heavily scrutinized in the SEC’s processing and ultimate rejection of Bitwise’s Bitcoin ETF application. Peirce argued that the standards that Bitcoin ETF’s are subjected to have never been applied to traditional markets offering.

SEC Commissioner Hester Peirce wrote that “the Commission applies a unique, heightened standard under Exchange Act Section 6(b) to rule filings related to digital assets” in a dissenting statement in response to the Bitcoin ETF rejection.Peirce wrote, "This line of disapprovals leads me to conclude that this Commission is unwilling to approve the listing of any product that would provide access to the market for bitcoin and that no filing will meet the ever-shifting standards that this Commission insists on applying to bitcoin-related products—and only to bitcoin-related products.”

Peirce is yet to make any official comment on her recent nomination.