Colin Wu, a Chinese blockchain journalist, has recently posted a tweet reporting that the legal troubles facing Mingxing “Star” Xu, the founder of OKEx cryptocurrency exchange, most likely have nothing to do with allegations associated with the CNY money laundering activities. 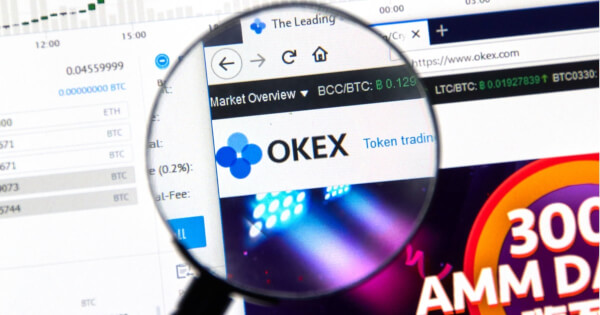 Colin Wu is a Chinese journalist who frequently covers issues associated with cryptocurrency exchanges, blockchain and digital currencies, and their regulations in China.

After the OKEx founder was arrested, the Twitter community and even the media assumed that the ongoing investigations of Xu are associated with the involvement of money laundering activities in China. Media sources reported that OKEx crypto exchange might have violated anti-money laundering regulations with over 800 accounts and huge amounts of funds involved in the case.

However, Wu's tweet on Oct. 21, indicated that he believes the sudden suspension of services last week on the OKEx exchange and the investigation into founder Star Xu have nothing to do with the Yuan money laundering on going in China. Wu suggested that the real issues are likely to be personal matters between the Chinese authorities and Mingxing Xu, the OKEx founder.

“OKEx announced the opening of CNY deposits and withdrawals, and the direct withdrawal of crypto is still not open. This may indicate that the OKEx platform has nothing to do with CNY money laundering. It is more of a personal problem with the founder of OK, Star Xu.”

On October 21, OKEx announced that it would resume P2P trading with Vietnamese dong, Indian rupee, and Chinese yuan fiat pairs. The crypto company said that for the time being, the buy option would only be available while the suspension of cryptocurrency withdrawals and sales still remains until further notice. The company’s blog said: “Please note that cryptocurrency withdrawals are still temporarily suspended and the "Sell Crypto" option is not available.”

In June this year, China’s Central Bank announced widespread investigations of money laundering activities from non-bank financial institutions and those identified to have violated expected regulations would be held accountable.

OKEx suspended cryptocurrency withdrawals on October 16 after the exchange announced to its customers that the company was unable to contact the private key holders in China. Information later emerged that such as an individual was the crypto exchange’s founder, Mingxing Xu, who by then had been arrested and was cooperating with the police for ongoing investigations. Caixin Chinese media company disclosed that Xu was interrogated for at least a week ago and had been absent at work some time. But the surprising thing is that he is the only person who holds the keys of the entire offer crypto exchange.

However, Jay Hao, the CEO and co-founder of the crypto exchange, stated that the issues facing Xu were to do with his own personal matters, which would not adversely affect the company’s business.

After OKEx announced the news regarding the suspension of cryptocurrency withdrawals, Bitcoin price fell by nearly 3% and OKEx’s native token (OKB) declined by 15% within half an hour. However, Jay Hao assured customers that all their funds are safe.