G20 officials have announced that they will begin the preliminary regulatory groundwork for the group to accept digital payments with the work to commence in October. 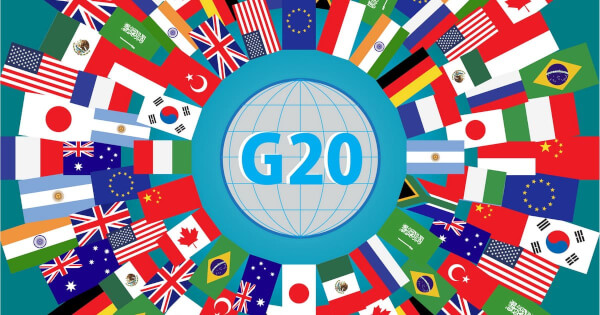 As announced by its officials, the G20 summit which is represented by 19 countries and the European Union will begin preparations for the group to accept digital payments in October. Digital currency payments could be realized by G20 members before their next summit slated for Riyadh, Saudi Arabia next month.

According to a Kyudo News on July 11, the G20 officials have enacted a policy change in their acceptance of digital assets and have begun building the necessary infrastructure in direct response to China’s accelerated development of its digital Yuan and Facebook’s development of Libra.

At the 2019 G20 summit in Osaka in June 2019, the G20 officials agreed that crypto-assets can bring significant benefit to the financial system and the broader economy, according to the “G20 Osaka Leaders’ Declaration”. The officials also expressed that that digital assets do not carry any threat to monetary stability and asserted that technological innovation in payments could bring significant benefits to the economy.

This stance by the officials was contradicted a few months later in October 2019, when the Financial Stability Board (FSB), the G20 body published a study on the challenges that stablecoins pose to the global economy. The FSB stated that regulatory frameworks have already covered several activities associated with stablecoins, although there are other risks that many national regulators could be left unprepared for as well as threats to public policy and financial regulation.

The G20’s policy towards digital assets which is largely steered by the European Union appears to be continuing to react to developments withing the digital assets space, and this latest policy change enactment appears to be mainly driven by China’s announcement that their central bank digital currency (CBDC) architecture has been completed.