The top three ranked cryptocurrencies, Bitcoin, Ethereum, and Ripple’s XRP have all recorded soaring price increases this week, but this week alone there are three major reasons we expect the BTC, ETH, and XRP price to continue to rally higher. 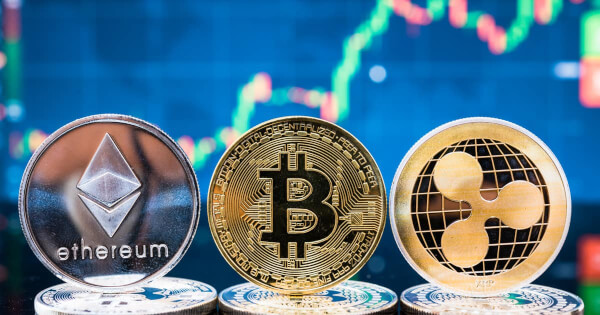 Since the beginning of November 2020, the world’s combined cryptocurrencies have added nearly $200 billion dollars in global market cap, with Bitcoin (BTC) leading the charge. Ethereum has risen over 30% and XRP’s price rocketed gaining more than 115% this week, according to CoinMarketCap.

While some traders are expecting a pullback, leading analysts reveal that historically Bitcoin and crypto prices are likely to surge around Thanksgiving. In addition, the overall cryptocurrency market could be in for a significant boost from anticipated publications from the European Central Bank (ECB) and the United States Federal Reserve this week, which should reveal further central bank coronavirus stimulus plans.

Bitcoin’s price is hovering above the $18,000 mark and its incredible bullrun is attributed mainly to the increased institutional investment as opposed to the 2017 BTC bull run which was mainly driven by retail FOMO—which incidentally is likely to come into play as another major bull factor very soon as BTC price approaches its all time high.

“A new all-time high in bitcoin could bring more media attention leading to a massive rally to new heights. While bitcoin is hovering around $18k, it's still not getting the same level of media attention as it did back in 2017. Once that happens, the millennial Robinhood traders and institutions that missed the boat will FOMO into BTC.”

“In 2017, there was a monster rally in Bitcoin over Thanksgiving. This year the chase will likely be in Ethereum. Little brother has a lot of catching up to do to match big brother Bitcoins’ performance.”

Brian Norton, COO, MyEtherWallet concurs that Ethereum is a major factor driving value creation but believes that Bitcoin’s price action is the lightning rod acting as an entry point for many into the crypto market. Ethereum has surged over 30% this week and the ETH price is $615 at the time of writing.

"The recent BTC price surge demonstrates how BTC functions within the greater digital asset space - as an entry point for the crypto curious, and a hedge against positions in the experiments occurring on other blockchains - Ethereum in particular - which are actively driving the value creation in the space."

“Once BTC cools off the profits would be sold off into altcoins starting a second bullish altcoin season. Thanksgiving is the time of year crypto investors evangelize their families into testing the waters on crypto. Crypto post-Thanksgiving will be very interesting for everyone to watch. We are possibly witnessing the birth of a new global digital reserve currency.”

Bitcoin and cryptocurrency prices have benefited from global central bank stimulus measures and this week investors in the United States and Europe are also waiting to get a clearer picture on whether the Federal Reserve and the European Central Bank (ECB) plan to provide further economic stimulus to combat the resurging COVID-19 cases.

"This year has been extremely unpredictable but Bitcoin held on to its value through most of the year and the recent bullish momentum proves to many Bitcoiners what we already knew: a global digital asset untethered to local fundamentals has extreme potential for global growth and adoption, especially in a time where nations are printing more of their currency to revive economic activity."

The Federal Reserve is expected to publish the minutes of its month’s monetary policy meeting on Wednesday, which Chairman Jay Powell said included enhancements to the asset purchase program to provide additional stimulus. The ECB will publish its own October investor meeting minutes and President Christine Lagarde has already revealed that the “ECB is already studying recalibration of all instruments” for a new stimulus mix.

At the time of writing the Bitcoin price is $18,450, the Ethereum price is $ 615, and the XRP price sits at 0.70. With the Thanksgiving crypto surge and these two major central bank announcements, traders have three reasons to expect a sustained crypto price rally into next week.