Paxful is the leading peer-to-peer Bitcoin marketplace to connect buyers and sellers for business. Paxful aims to give users complete control over their money and bypass time-consuming and expensive intermediaries and also boasts having over 300 payment methods available.

As the impact of the coronavirus pandemic continues to steer Central banks and monetary policy into new and creative directions, the market outlook has been drastically altered to view alternative assets such as Bitcoin as legitimate safe haven assets. Recent developments with the Reserve Bank of India lifting its crypto ban has also triggered a wave of cryptocurrency buying in the emerging economic superpower, and Paxful has been right at its centre. 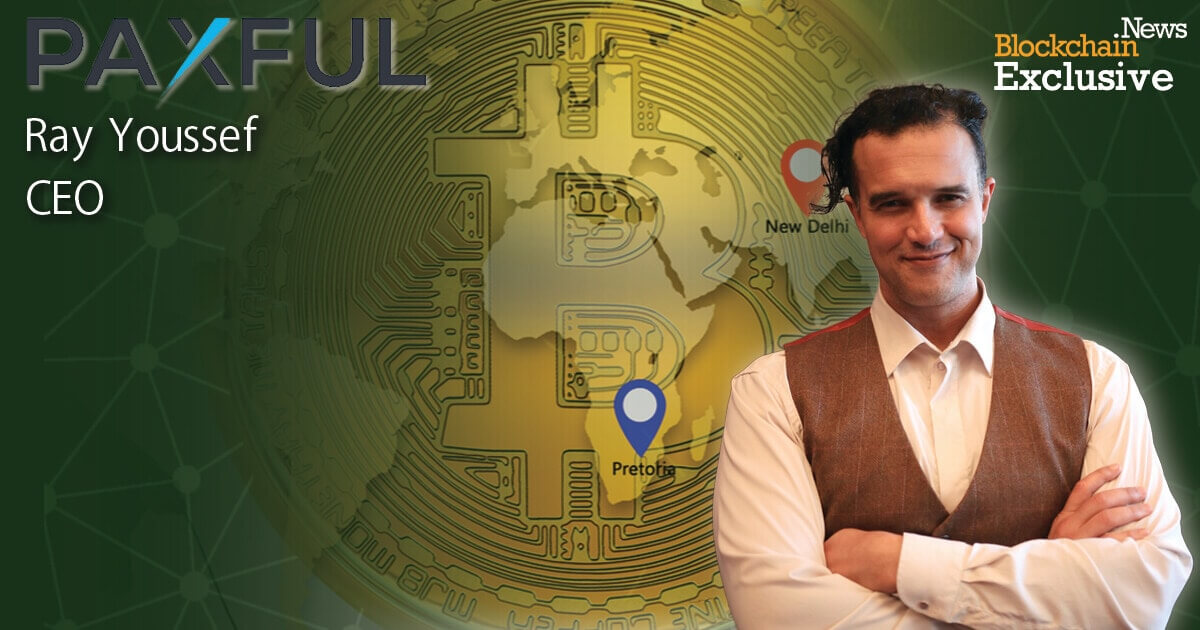 We decided there was no better to time for Blockchain.News to catch up with Ray Youssef, CEO of Paxful to discuss the peer-to-peer marketplaces rising adoption in India and Africa and his thoughts on the market outlook for Bitcoin and alternative assets.

COVID Disruption and the Role of Peer-to-Peer Trading

In 2014, Ray Youssef and Artur Schaback founded EasyBitz, the basis for a Bitcoin peer-to-peer marketplace which was later renamed to Paxful. As is evident now more than ever with the COVID market climate, most problems in the world revolve around money, specifically earning it and transporting it. The goal of Paxful was to make access to Bitcoin and cryptocurrencies easier for businesses and merchants.

Amid the pandemic market climate, Youssef said, “We expect that peer-to-peer trading will rise in the coming months. COVID-19 has put a severe dent in almost all of the major economies and radical economic measures have been taken to reduce the impact,” He continued, “These measures have the potential to hurt the economy in the longer run, in this case, Bitcoin can serve as a better store of value for wealth. This means an even more robust ecosystem of P2P trading with newer participants and a greater reach.”

As the word crisis implies and event that few could be prepared for, we asked Youssef if the down-turned economy had altered Paxful’s goals for 2020. He said, “We’re focused on entering new markets and building products for real-life use cases. No, the recent events have not altered these goals. More so, it showed us where bitcoin and peer-to-peer finance has the most potential and impact to change lives.” 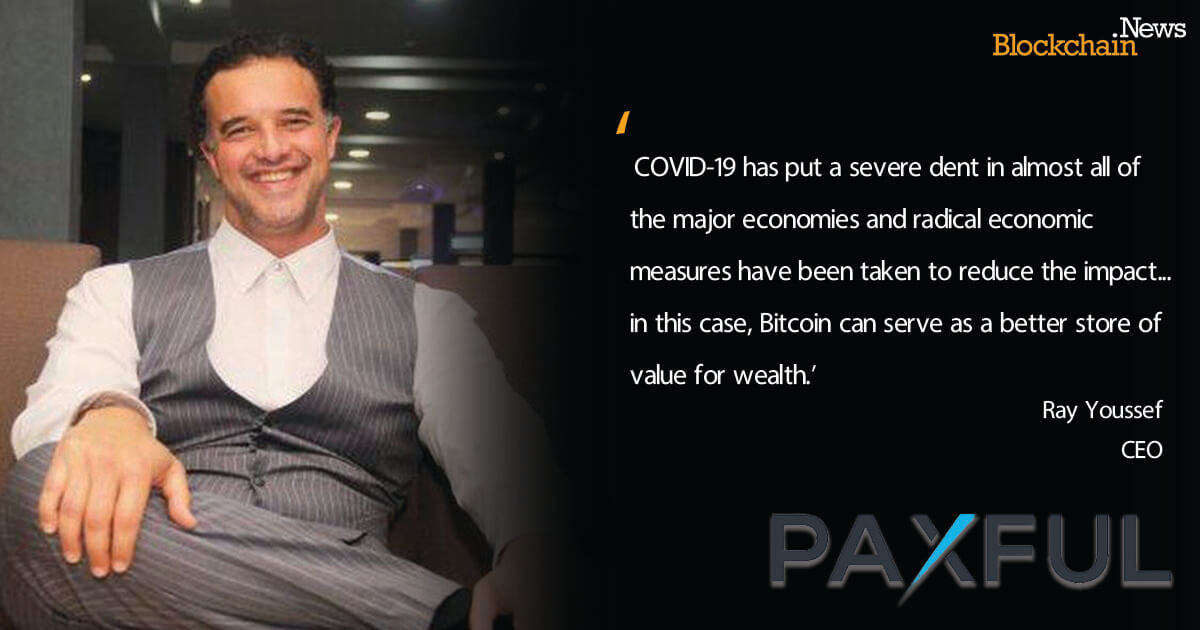 According to Paxful’s recent survey on the Indian cryptocurrency boom,  India is one of the main emerging markets despite the a crypto trading ban imposed in India in 2019.  The survey findings indicate that India’s enthusiasm for Bitcoin has been reignited following the landmark decision to lift the ban on crypto trading this year.

“There is immense potential in India, the survey done by Paxful revealed that over 93% of respondents invested in crypto prior to lifting the ban in 2020. Now that the RBI circular which places a banking ban on the crypto industry was deemed unconstitutional by the court, there is a tremendous potential for mainstream adoption.” said Youssef, “India is at the tipping point of Internet adoption with an increase in Internet penetration and mobile usage by a CAGR of over 20% between 2013 and 2017.”

According to Youssef, the new generation in India is extremely qualified and tech-savvy but for the lack of better jobs, they are often found doing underwhelming jobs. He believes, “Bitcoin and cryptocurrencies can open a new avenue of employment opportunities for these people where they can apply themselves and make good earnings.”

He said, “For a technology that is as groundbreaking as Bitcoin, there has to be a lot of education before it is accepted by the masses. This includes eradicating all the fears that potential users have about digital currencies, educating them on possible scams, in a way negate the unfair negative publicity around the cryptocurrency space. Also, a strong developer community that can build real-life problem-solving applications can go a long way in accelerating the adoption.”

As part of its mission to provide equal access to the financial system, Paxful launched the #BuiltWithBitcoin, a social good initiative with the goal of building 100 schools funded entirely by bitcoin all across emerging markets. Youseff said, “There are 2 schools in Rwanda, and currently building the 3rd one in Machakos County, Kenya.” He added, “Africa is one of the fastest-growing markets in Paxful. We had an education drive focused on universities last year beginning with universities in East and Southern Africa, the initiative has reached over 1000 youths. The education workshops provided key, practical insights to the true use cases of Bitcoin, how to avoid falling prey to bad actors in the crypto-space and served to counter the over-emphasis on Bitcoin speculation.”

Beyond the talking points how does greater financial inclusion benefit the global economy, and what problems remain in Youssef’s view? He explained, “The flow of wealth and money helps to make the economy more liquid and create more jobs. Providing an equal financial system bolsters this process by providing more participants and more opportunities to them. This often means new and creative ecosystems to help people and solve their problems will emerge which will provide people with jobs and a source of income.”

Bitcoin was originally designed as the alternative currency to Fiat as controlled by sovereign financial institutions. With the recent COVID and markets crash, Bitcoin has exhibited a strong positive correlation with S&P 500 markets leaving many to wonder if it could achieve its original visions of being an alternative store of value.

Youssef commented, “It's true that Bitcoin’s correlation with S&P was at its highest last month which threatened the notion many believe that Bitcoin has a trajectory of its own and does not correlate with other stocks, but those were times of extreme uncertainty and confidence in just about any asset was on the line. Bitcoin since has shown a tremendous recovery. There have been studies that show that the correlation-whatever the amount is usually seen when the stocks are going down suggesting that bitcoin typically recovers faster than the stock market.”

A recent report by Bloomberg has indicated that the coronavirus market downturn may be accelerating Bitcoin’s safe haven status and maturing the pioneer cryptocurrency into a type of digital gold.

Youssef gave his opinion on the Bitcoin safe haven narrative, he said, “As mentioned above, Bitcoin, up to this point, has more or less had an independent trajectory compared to other asset classes but it has its own uncertainty and volatility in its cycle. Any investments should be backed by research and strategic risk mitigation.

With the Bitcoin Halving approaching fast, the whole industry is speculating on whether or not we can expect a Bitcoin bull run post halving.

“If history is any indication of the future, I am pretty bullish about the next halving.” Youssef revealed, “Usually, the interest around Bitcoin goes up due to halving because Bitcoin is only getting more scarce. We’ve had astronomical increases in prices during the last two halving. There are also several indications for that. Google Trends suggest that the interest around bitcoin halving is at all-time high already eclipsing the phenomenon last term. Various news pieces also suggest that there has been a sharp spike in the number of Bitcoin addresses holding at least 1 BTC and at least 0.1 BTC as evidence of accumulation by retail investors ahead of halving.”

He added, “There was a similar movement with the number of wallets holding at least 0.1 BTC with the number reaching all-time high, this suggests that the investors are accumulating bitcoin ahead of next halving.”

A refreshing insight on the halving as many have refused to comment. Youssef was more elusive when asked about upcoming partnerships for Paxful in 2020, he said, “I can’t disclose anything yet but our team is working on finding partners that can help us bring Bitcoin and peer-to-peer finance to the masses.”