Oleksandr Lutskevych is the founder and CEO at CEX.IO LTD, a successful London-based group of companies, including CEX.IO Bitcoin Exchange.

Established in 2013 as the first cloud mining provider, CEX.IO is a multi-functional regulated cryptocurrency exchange registered as a Money Business Service  (MSB) by the US regulator FinCEN.

CEX.IO is trusted by 3 million users in 220 countries and territories. In 2019, CEX.IO launched a dedicated US presence and has obtained Money Transmission Licenses in 25 states. They are able to currently serve 42 states in the US.

Lutskevych is a pioneer in the Bitcoin industry and serial entrepreneur with deep expertise in internet technology businesses. Blockchain.News caught up with Lutskevych to discuss the enduring success of the CEX.IO exchange and how they have managed to navigate the ever-changing landscape of US regulation and compliance where so many other exchanges have failed. 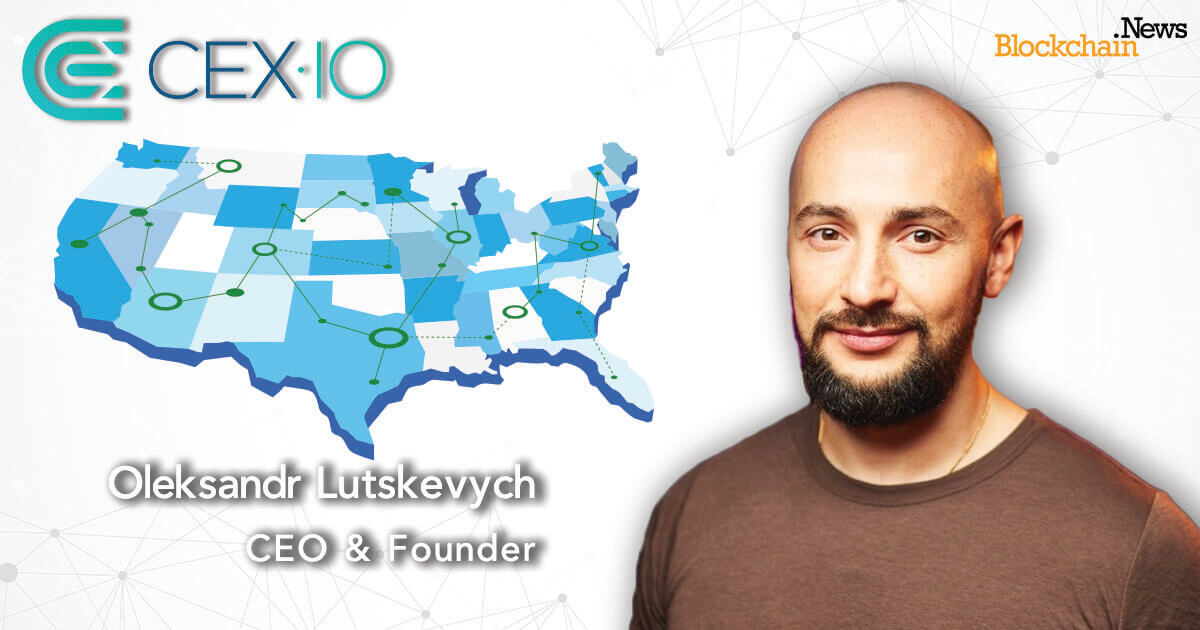 Operating since 2013, CEX.IO is one of the pioneers of the digital assets market. With more than 3 million users across the globe, CEX.IO provides stable services based on the standards and practices similar to those used by international financial institutions. Lutskevych said, “We’ve been evolving together with the industry and have always been early trendsetters, particularly in facilitating the purchase of cryptocurrencies with mainstream payment cards.”

Lutskevych puts the success of CEX.IO down to a combination of factors ranging from the broad spectrum of payment and trade options to his company’s transparency in operation and holistic approach to customers' needs. He said, “CEX.IO is a part of an ecosystem —CEX.IO Group, providing various services to both retail and institutional customers. From easy buy and sell of cryptocurrencies with bank cards to API for advanced traders to liquidity services, to AML/KYC instruments,  etc. That means a customer can come with any level of experience and find what they are looking for to meet their needs.”

Being early facilitators of more consumer-friendly payment options for cryptocurrency was a deliberate step in CEX.IO’s strategy to foster mainstream adoption. Lutskevych said, “This can only be achieved if we allow customers to use tools they are already familiar with. Therefore, building a strong fiat on- and off-ramp for the crypto economy has been our focus for years. Very few other exchanges can boast the spectrum of payment methods that we offer. From bank transfers to immediate card transactions, a customer can choose the speed and the cost of fiat money transfers the most applicable for each specific situation.”

Compared to many crypto-related businesses, CEX.IO has always chosen a regulated path. While there were, and still are, opportunities and avenues for exchanges to avoid regulators, Lutskevych maintains that opting into regulatory oversight “provides our clients assurances that we hold ourselves accountable under the authority of  regulatory controls.”

Since 2015, CEX.IO has held MSB (Money Services Business) status with FinCEN,  the Financial Crimes Enforcement Network of the US Treasury. Lutskevych said, “So far, we have received Money Transmitter Licenses (MTLs) in 25 US states. Together with 17 other states where we have an approval to operate without the need to obtain an MTL, in total we can serve the residents of 42 states.” He added, “In Europe, we’ve obtained the Distributed Ledger Technology (DLT) license issued by the Gibraltar Financial Services Commission ( GFSC ).”

Since 2015, CEX.IO has completed 3 successful independent annual audits. Aside from the consistent maintenance of the MSB status with FinCEN, the London-based exchange has expanded its coverage across the US with fierce efficiency obtaining 25 MTL licenses in the space of a year and they are now operational in 42 states, at time of writing.

Lutskevych said, “We attribute such progress to our commitment to best practices since inception. Understanding that cryptocurrency businesses means the need to adhere to regulatory standards to operate at scale, we’ve incorporated the standards, at first, as a matter of self-regulation. And, when the regulatory frameworks applicable to our industry have become clearer, for example, AML and KYC procedures, we’ve just fine-tuned the previously implemented practices.”

CEX.IO’s strategy gave them a unique advantage when the time for regulatory assessments was imperative. Lutskevych explained, “For us, it was not a matter of instilling new and unfamiliar practices, but rather a matter of demonstrating how we have already incorporated those practices fully into our business.”

For their US expansion, CEX.IO only has 7 more MTL licenses yet to be awarded and Lutskevych reported that they anticipate receiving them all by the end of Q1 2020. He said, “Having been through the process in multiple states, we are thankful that the US has such strong protections for money transmitters.”

The cryptocurrency industry pioneer believes full coverage in the US is only a matter of time for CEX.IO but also thinks that the growing number of applications for licenses may be slowing things down. Lutskevych said, “With the increased market participation of cryptocurrency businesses, state regulatory agencies may have gotten overloaded with applicants, slowing down the pace at which new licenses are issued.”

As a concluding message to part one of our interview, Lutskevych maintains that despite the well documented regulatory uncertainty in the US towards crypto-business and products, CEX.IO has prevailed throughout these uncertain times by working with the regulators and not around them. He said, “We have been able to build stronger products to best serve our customers by corresponding with and observing regulators’ advice throughout the entire process.”