Federal Reserve officials of the Federal Open Market Committee (FOMC) said that they will continue to hold US interest rates close to zero and will continue to push inflation above 2% by 2023. Bitcoin (BTC) and gold both had price rallies coinciding with the FOMC announcement. 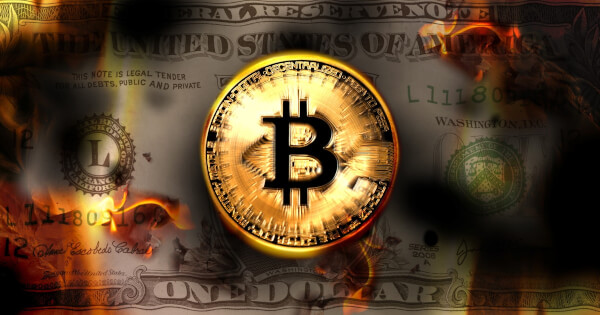 The Fed panel of the FOMC will keep interest rates unchanged and maintain its monetary policy for an unspecified time until inflation has surpassed 2%. The news appears to have temporarily spiked the BTC price above the $11,000 resistance as the US dollar continues to be devalued.

According to the FOMC statement on Wednesday, Sept. 16, the Federal Reserve will increase its holdings of US Treasury securities and mortgage-backed securities at the “current pace to sustain smooth market functioning” and create accommodative financial conditions.

Projections from individual FOMC members also indicated that rates could stay anchored near zero through 2023 according to materials released with the official statement.

Bitcoin was trading just above $11,000, an increase of 2.4% in the 24 hours leading up to the announcement with the price spiking to $11,071 immediately following the Federal Reserve announcement. The S&P 500 Index also increased by 0.35%.

Bitcoin investors have been awaiting the Federal Open Market Committee’s (FOMC) September meeting, for clarification on the FED’s rate-setting in light of current monetary inflation. The now updated framework will allow for a moderate overshoot of their 2% inflationary target, alleviating the urgency for officials to step in and raise rates to stave off a run-up in inflation.

The Federal Reserve's actions could result in the dollar losing value amid the central bank's attempts to keep the economy afloat amid the COVID-19 pandemic. The Fed maintaining low-interest rates means people are willing to borrow money and are likely to spend and stimulate the economy—but providing more money in the market will push up the asset prices and cause inflation. Bitcoin, with its underlying technology blockchain, is theoretically immune to devalued monetary policy due to its anti-inflationary mechanism and scarcity of only 21 million coins.

As previously reported, Bitcoin’s scarcity has transformed the crypto asset into a reliable safe-haven asset, and it currently bears its strongest correlation to gold. Analysts like the Winklevoss Twins, Paul Tudor Jones, and even George Ball now view BTC as a reliable hedge against debasing monetary policy and believe higher inflation will push the Bitcoin price higher.

Most recently, publicly-traded billion-dollar software firm MicroStrategy announced its new capital allocation investment strategy in August buying up $250 million in Bitcoin, and following up with a $175 million BTC investment just a day prior to the Fed’s announcement—an intelligent move by the intelligence firm, and one that further validates Bitcoin as a mainstream safe haven and store of value.

The Bitcoin price currently sits at $10,922 at the time of writing with the $11,000 price level forming its new resistance.