Data from on-chain analytics firms confirm that Bitcoin whales are forming, more than 2000 BTC wallets are currently holding over 1000 Bitcoin, or more than $11 million in Bitcoin per wallet. 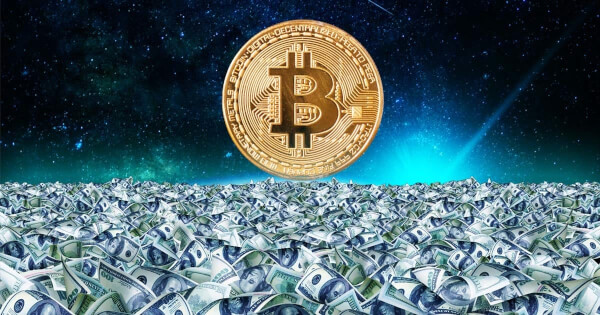 New data from on-chain analytics firm Glassnodes shows that Bitcoin whales—BTC wallets holding 1000 BTC or more—are amassing in the cryptosphere, indicating that wealthy investors and institutions are in fact investing huge amounts of capital into the safe-haven asset in this time of economic uncertainty.

The Bitcoin Price has been trending upwards in recent months, recently clearing the $12,000 dollar resistance only to go through another correction and now sits at around $11,600 at the time of writing. Bitcoin has moved its highest correlation yet with traditional safe-haven asset Gold, and the surge in BTC whale wallets indicates that wealthy investors now view the crypto as a legitimate safe-haven asset.

As the Glassnode chart below displays, the number of Bitcoin wallets holding 1000 BTC or more has rapidly increased. 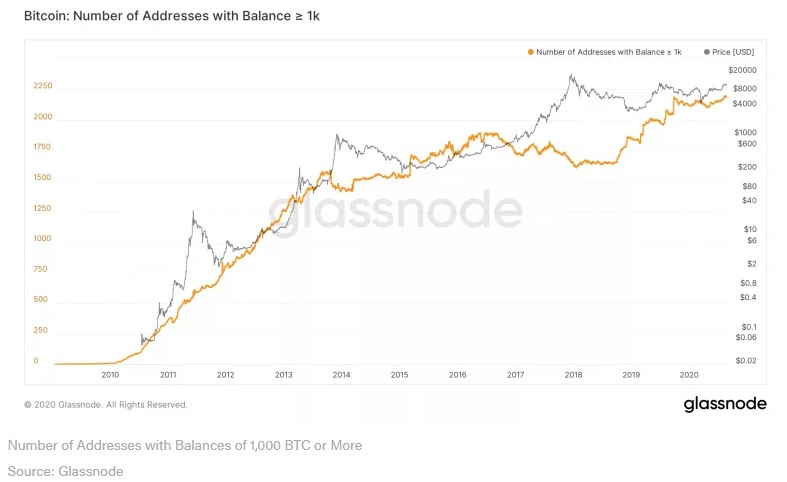 The total value of Bitcoin held in these wallets currently amounts to over $92 Billion.

In the wake of the COVID-19 market crisis and rising quantitative easing by world governments, particularly the United States Federal Reserve which continues to float the economy on stimulus—more mainstream investors have been looking into Bitcoin and altcoins as alternative stores of wealth to guard against the predicted inflation crisis.

Bitcoin’s increased correlation to gold now appears that mainstream and institutional investors are increasingly recognizing the value of Bitcoin’s absolute scarcity to confront the Fed’s money printing and seemingly unlimited and unbacked liquidity.

As reported by Blockchain.News on Aug 18, Chairman of Roger Holdings and prolific American investor Jim Rogers recently warned that the COVID-19 emergency stimulus programs and central bank bailouts will lead to the worst economic meltdown of his lifetime.

Rogers' warning came in a recent interview, where he discussed the efforts of global central banks to stimulate their respective economies through the creation of trillions of dollars in currency. Despite the stock market now going back up and appearing healthy, Rogers predicts the bailout will ultimately end very badly in the long-term.

Rogers sees the US markets as a bubble that will pop when the US elections are no longer a priority. He said, “Remember there is an election in the US in six months in November and all those guys want to get re-elected. They do not care about you and me and our kids. They care about November and getting re-elected. So, all sorts of good things will keep happening and the markets will be ok for a while…”

Meanwhile, George Ball the former chief executive of Prudential Securities and current chairman of Sanders Morris Harris also recently said that despite being a long time Bitcoin opponent, he now sees Bitcoin as a safe haven asset following the United States government’s efforts to continue to stimulate the economy with liquidity.

Ball has joined the growing list of traditional financial industry experts to advocate for Bitcoin as a safe have asset and hedge against inflation. While Ball commended the efforts of the US government and the Federal Reserve and their attempts to offset the coronavirus pandemic’s disruption to the economy, he said, “The approach of the end of that road is going to be a lot closer by the fourth quarter than it is now and therefore both traders and investors should and probably will realign their portfolios substantially."