The Bitcoin price has more than doubled in less than a month with easy monetary conditions and trillions of dollars in fiscal stimulus leading many investors to view the token as a new inflation hedge. 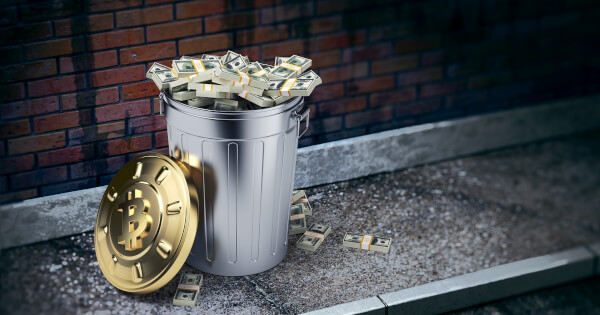 The Trump administration reported in early October 2020, that the deficit for the budget year that ended on Sept. 30, 2020, was three times the size of 2019’s deficit of $984 billion. It was also $2 trillion higher than the administration had estimated in February before the coronavirus pandemic hit.

The Trump administration’s final accounting of the 2020 budget year shows that revenues fell by 1.2% to $3.42 trillion, while government spending surged 47.3% to $6.55 trillion. That spending reflects all of the relief programs Congress passed in the spring to shore up the economy as millions of Americans were losing their jobs.

With the recent approval of another $900 billion dollars in United States federal stimulus packages—which may increase further in the very short term as President-elect Joe Biden pushes for an increase on direct payments from $600 to $2000 per US citizen—Bitcoin billionaire Tyler Winklevoss again made the case for Bitcoin over the US dollar, alluding to the crypto’s scarcity and the impending consequences for limitless federal money printing.

“23.6% of all U.S. dollars were created last year. Cash is trash. #Bitcoin is your only protection from the rampant inflation that is at our doorstep.”

Despite the Bitcoin price facing an extreme correction earlier today, plunging 15% from $41,000 to lows of $34,000 in the last 12 hours, Bitcoin billionaire Tyler Winklevoss once again re-affirmed that “cash is trash.”

While Bitcoin may at first seem completely disconnected from the coronavirus pandemic, the economic disruption of the virus out has played a critical role in supporting the cryptocurrency’s price movement. Governments around the world passed several trillion dollars worth of fiscal stimulus to buoy markets against the pandemic's economic damage.

The influx of fresh currency from the Federal Reserve and easy monetary conditions has boosted the case for Bitcoin as a hedge against inflation according to JPMorgan analyst Nikolaos Panigirtzoglou back in November. A limited supply of 21 million tokens and insulation from policy decisions saw the token serve as an alternative to gold and other hedge assets.

Bitcoin billionaire and founder of Gemini digital asset exchange Tyler Winklevoss firmly believes that Bitcoin (BTC) is headed towards a markup of $500,000 in price and that it will inevitably be the preferred safe-haven asset on the market, rather than gold.

While the stimulus money printing has served to float to the stock markets, Winklevoss made the case for Bitcoin’s $500K price tag back in August 2020 and argued that the Fed’s approach to QE was not based in reality and would lead to high inflation in the near future. Citing the repercussions of the FED action against 2008 global financial crisis, Winklevoss said:

“Every time the Fed tried to rein in QE pre-COVID, markets recoiled viscerally and became combative. And if stock market gains are your measure of success, you will choose not to upset the apple cart, even if it’s wildly untethered to reality. You will naturally avoid a painful intervention and rehabilitation and continue to kick the can down the road as long as you can.”

Over the last six months, an increasing number of institutional giants have been buying into Bitcoin—searching for hard assets with scarcity to invest in, something that will not go up in terms of supply. Institutional interest in Bitcoin really began to heat up in the second half of 2020 as companies such as MicroStrategy, Square, and mainstream insurance giant MassMutual made staggering investments into Bitcoin.

On a recent episode of CNBC’s Mad Money, legendary investor Jim Cramer added to the Bitcoin hedge narrative, he said:

“People don’t believe in fiat currency anymore,[...]People believe that the United States is printing money … But Bitcoin is not printing bitcoin. So that’s more valuable in the same way that gold is hard to find. And gold is growing, we find, about 1% more than we had the year before, that’s all … so it has to do with scarcity.”

Cramer also emphasized that Bitcoin has total scarcity there is only some scarcity in Gold and zero scarcity to US dollars. He said:

The Mad Money host further added: “the more people who give it [Bitcoin] a higher price … the more likely it is that there will be more people come in.”

At the time of writing the Bitcoin price continues to consolidate just above the $35,000 price level.

Institutional Bitcoin Buying Could Push Price to $45K, What Happens When They Start Taking Profits?