Bitcoin (BTC) broke the $50K again after suffering a significant pullback, which prompted a $10K daily loss in September. The top cryptocurrency was up by 3.69% in the last 24 hours to hit $51,334 during intraday trading, according to CoinMarketCap.

The Bitcoin Lightning Network has been following suit because it crossed the 3,000 BTC capacity for the first time. 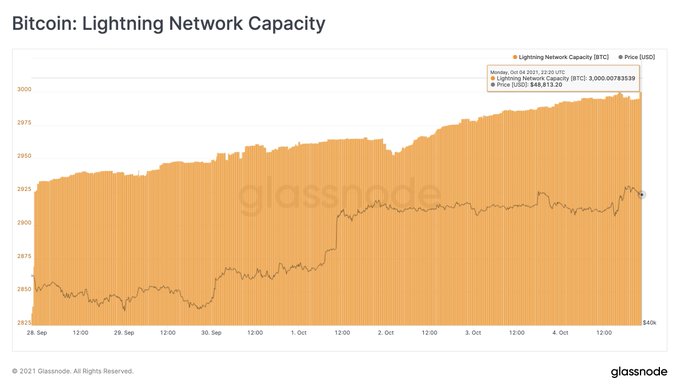 Therefore, transactions on lightning networks are more readily confirmed, cheaper, and faster than that processed on-chain or Bitcoin mainnet (layer one).

Meanwhile, the surge above the psychological barrier of $50,000 has made more than 5.28 million BTC addresses return to profitability. Data analytic firm IntoTheBlock explained:

“After quite a brutal September and consolidating in the lows of the $40k range, Bitcoin has rallied to the highly contested $50k barrier once again. With this rally, over 5.28m addresses returned to a state of profit from the monthly low on September 21st.”

Bitcoin on exchanges slip to a 30-month low

“With Bitcoin returning to $50k for the first time in four weeks, this comes as the percentage of supply on exchanges has now dropped to its lowest level since June 4, 2019. The 30-month low further de-risks the chance of a major selloff.” 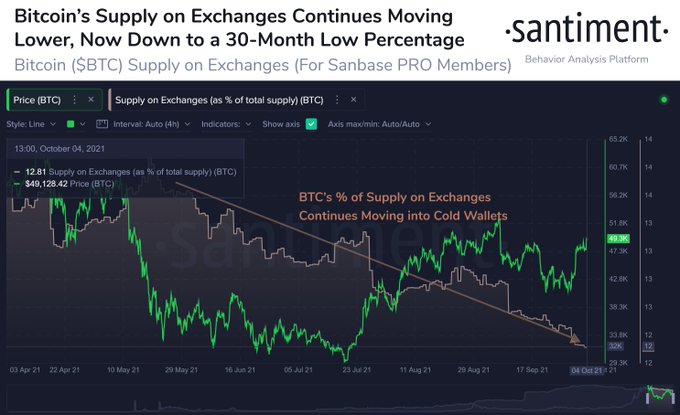 Therefore, Santiment believes these levels water down the probability of a significant selloff. This is founded on the fact that whenever cryptocurrencies leave exchanges in droves, they are kept in cold storage and digital wallets for future purposes other than speculation—as a result, signifying a holding culture that is bullish.

Holding is a favoured strategy in the crypto space. For instance, held BTC recently hit an 8-month high.