Countries in the Central & Southern Asia and Oceania (CSAO) region received more than $900 billion in crypto value from July 2021 to June 2022, according to Chainalysis released on Wednesday. 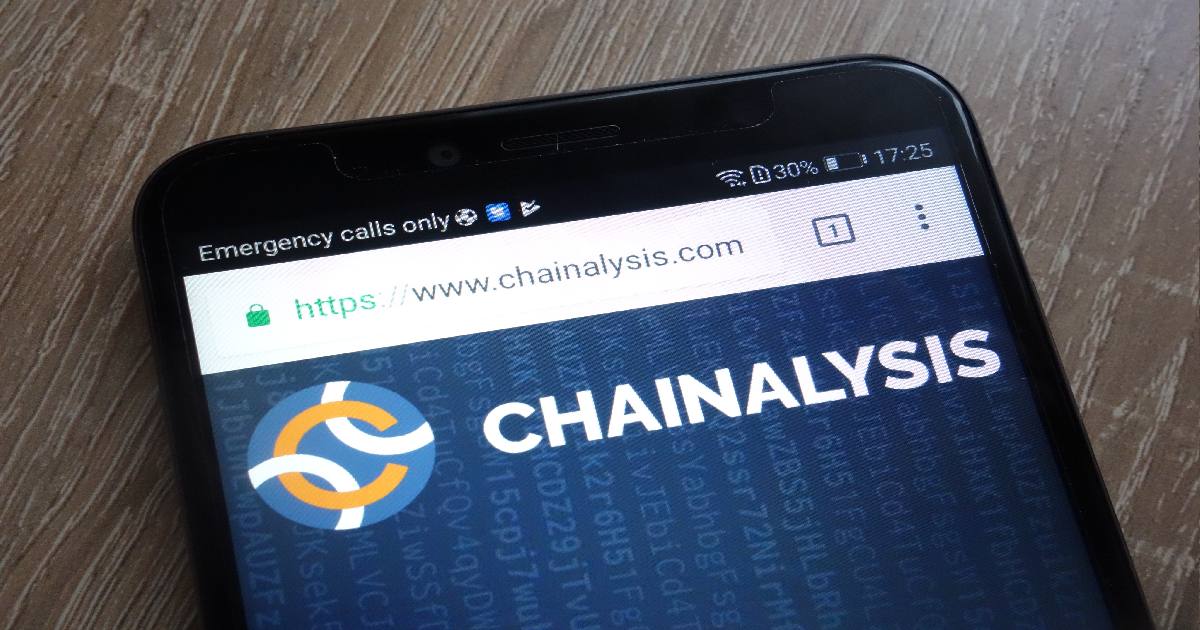 The report further identified CSAO as the home to seven of the top twenty countries in this year’s index analysis: Vietnam (1), the Philippines (2), India (4), Pakistan (6), Thailand (8), Nepal (16), and Indonesia (20). The report further identified India, Thailand, and Vietnam as the countries that are leading the CSAO region in cryptocurrency value received in the last year.

India received $172 billion in cryptocurrency value from July 2021 through June of this year. Thailand, Vietnam, Australia, and Singapore follow close behind, with each receiving more than $100 billion. However, less engaged with cryptocurrencies are Central Asian countries like Uzbekistan and Oceanian island nations like the Maldives. 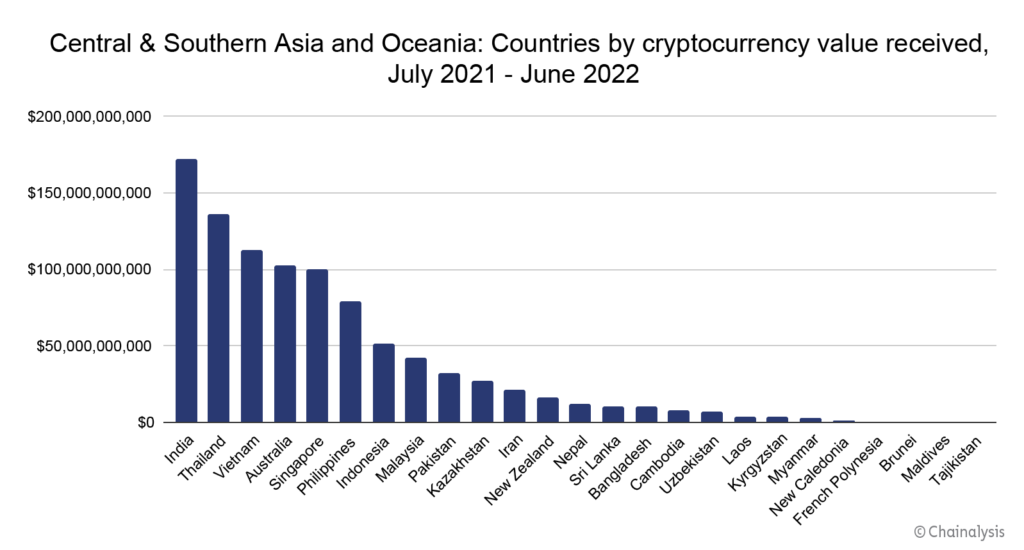 According to the report, non-fungible tokens (NFTs) and play-to-earn games make up a significant portion of crypto holdings and web traffic in the CSAO region. 58% of web traffic from CSAO IP addresses to crypto services in Q2 2022 was NFT-related, and another 21% was to the websites of play-to-earn blockchain games. 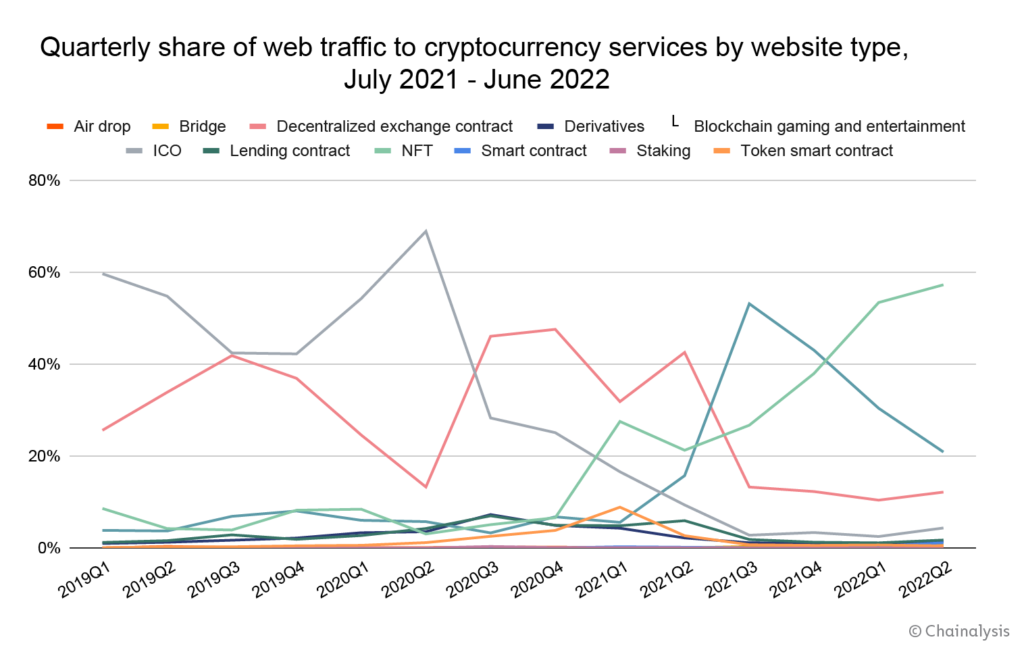 Thailand, Vietnam, and the Philippines are some of the countries with high web traffic to NFT marketplaces. A large portion of that NFT-related traffic appears coming from players of blockchain games. While NFT-related websites account for a majority share of web traffic in almost every CSAO country, most of these countries have witnessed huge amounts of the share going to blockchain games and entertainment.

This clearly explains why CSAO is a hub for innovation in blockchain-based entertainment. For example, game-centric blockchain developers Polygon and Immutable X are headquartered in India and Australia. And Axie Infinity and STEPN, the two largest play-to-earn games, are operated in Vietnam and Australia, respectively.

Chainalysis further identified factors such as play-to-earn (P2E) games, remittance payments, regulatory concerns, and bear markets as the key drivers that influence the level of cryptocurrency adoption in these countries.

High penetration of play-to-earn (P2E) games in the CSAO in countries leads to high crypto activities in the region. An estimated 25% of Filipinos and 23% of Vietnamese citizens have played a play-to-earn game, and at one point, players based in the Philippines made up 40% of Axie Infinity’s playerbase.

Massive remittance markets have been seen in various CSAO countries. For instance, in Vietnam and the Philippines, remittance inflows account for 5% and 9.6% of their respective country-wide gross domestic products. Pakistan, India, and Bangladesh each have $20+ billion in remittance markets, and blockchain-based payment providers are beginning to disrupt traditional intermediaries.

Crypto regulatory concerns might have dampened crypto activities in Indian and Pakistani, but not the pace of innovation in the countries. Recent regulatory developments may help explain why India and Pakistan fell from the second and third highest adopters of cryptocurrency globally, respectively in 2021, to the fourth and sixth highest adopters in 2022.

Lastly, the bear market is considered to have been responsible for the decline of traffic to websites related to subjects like decentralized exchange contracts in recent quarters.

Chainalysis, which recently helped US regulators recover $30 million in funds stolen from the Ronin Bridge, last week released a global crypto adoption index report that confirmed the above analysis. Last week’s Chainalysis report showed that while global adoption slowed down due to the impacts of the crypto winter, emerging markets have appeared to be on fire in terms of adoption as they surpass high-income nations.

Emerging markets are in the forefront. Chainalysis data showed that lower-middle-income countries such as  Vietnam, Philippines, Ukraine, India, Pakistan, Nigeria, Morocco, Nepal, Kenya, and Indonesia hold positions in the top 20 countries in terms of global crypto adoption, with Vietnam holding position one.

Upper-middle-income countries like Brazil, Thailand, Russia, China, Turkey, Argentina, Colombia and Ecuador have also appeared on the list. The US and the UK are the only representatives of high-income countries within the index.