Vitalik Buterin: Time will Tell Whether the Hive Blockchain will Surpass Steem

Justin Sun’s entry into Steemit is not going down well with the community. They have created a hard fork of the blockchain and named it Hive. Vitalik Buterin, Ethereum Founder, tweeted that Hive stands a test of time in demonstrating whether self-independence will be achieved. He trusts that the Steemit community seeks to have full autonomy and decentralization through the hard fork.

Vitalik Weighs in on the Hive vs. Steem issue

As per Vitalik’s tweet, blockchain governance ought to be enshrined in autonomy, and this will be achieved if Hive surpasses Steem. This will be a perfect indicator of the community being at the helm as decentralization is not for sale. 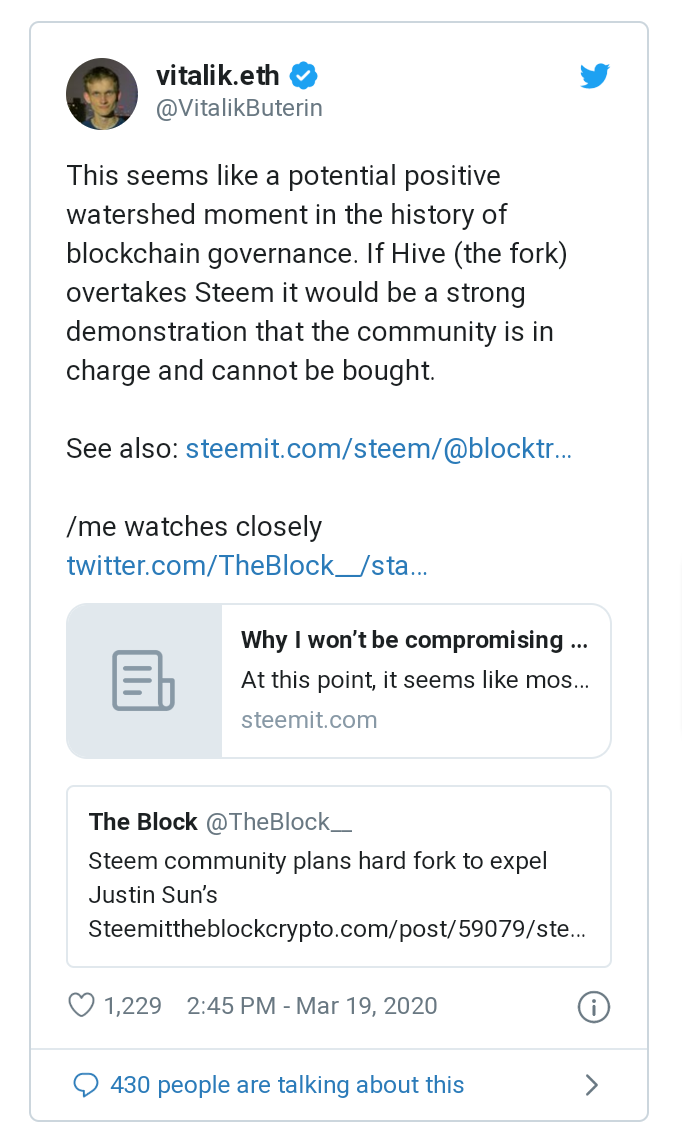 The general sentiment of the community towards Vitalik’s tweet was that an 80% drift towards Hive could be witnessed.

The conception of the Hive blockchain

After Justin Sun acquired Steemit, the community members were not impressed, and this is the reason why they created the Hive blockchain as a hard fork of the prevailing Steem code, and the upgrade is scheduled for March 20.

The Hive blockchain is to be entirely decentralized and function out of the confines of the Steem network.

By taking this approach, the message being relayed by Hive entails blockchain-based products being more community affiliated as compared to centralized controllers and investors.

It is also expected that all legit accounts found on the Steem blockchain will attain an airdrop on the Hive network. Nevertheless, members will have to create a new Hive account that will be independent of the Steem one.

The Steemit community has shown its commitment to ensuring that the new chain materializes. For instance, a group of 36 experienced developers is working on Hive.

Justin Sun, the Tron founder, has been making notable steps in the crypto space. As reported by Blockchain.news on Feb 7, he ultimately got his much anticipated $4.57 million USD dinner with Warren Buffet. Nevertheless, it remains to be seen whether Sun’s acquisition of Steemit is a case of biting off more than you can chew.