The Chief Executive Officer of Irish based airline RyanAir, Michael O’Leary has declared Bitcoin (BTC) a Ponzi scheme and has urged the boycott of the premier digital currency. These declarations were made after the CEO’s image was used by fraudsters to run a fake Bitcoin ad campaign. 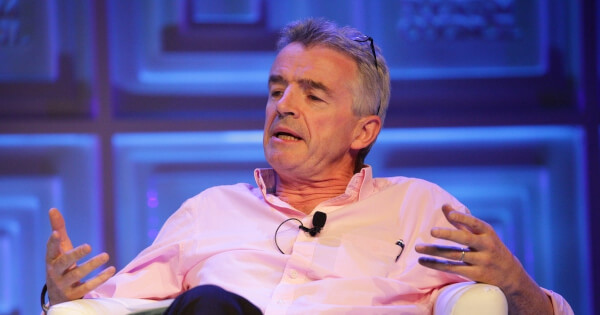 According to the report, the online scam which appeared in several media outlets featured Ryan Tubridy interviewing Michael O’Leary with O’Leary allegedly saying:

“I’m glad I tried [Bitcoin] because it was some of the biggest and easiest money I have ever made. I’m talking tens of thousands of euro[s] a day on autopilot.”

According to the scam ad purveyors, O’Leary made the tens of thousands of euros through the platform Bitcoin Lifestyle, stating that his bank National Ireland Bank stopped him from sharing the secrets. As discovered, neither the Bitcoin lifestyle nor the National Ireland Bank existed further adding to O’Leary’s rage.

Leary told The Sunday Times when asked for comments:

"I have never, and would never, invest one cent in bitcoin, which I believe is equivalent to a Ponzi scheme, I would strongly advise everyone with any shred of common sense to ignore this false story and avoid bitcoin like a plague."

Michael O’Leary is yet another high profile individual whose identity will be used in perpetrating Bitcoin scams.

A massive security breach gripped social media giant Twitter back in July and the account of over 130 high profile individuals including Bill Gates, Elon Musk and Floyd Mayweather were compromised.

The perpetrators of the twitter hack led by 17-year-old Graham Ivan Clark accessed the direct messages of these victims to post messages cajoling other unsuspecting twitter users to send Bitcoins to a stated address.

While the Twitter Bitcoin scam led to the loss of over $100,000 worth of Bitcoin before being stopped, the model of scam is similar, by using impersonation as a tool to gain trust.