As the NY State Department of Financial Services has slapped Deutsche Bank with a $150 million dollar fine, Bitcoin Community has been quick to call out the institutional bank’s shortcomings in funding the international child sex trafficker Jeffrey Epstein. 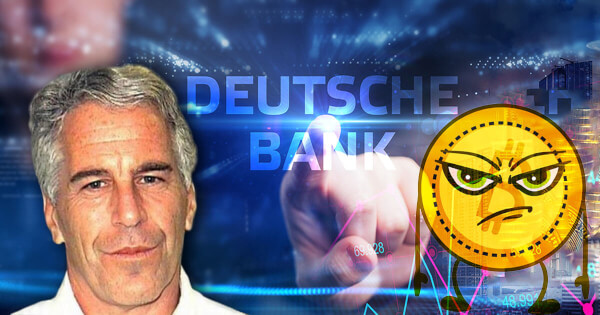 Jeffrey Epstein, the recently deceased American socialite and sex offender, was apprehended back in 2019 for prostitution and sex trafficking charges. Convicted of prostitution trade and for sexually assaulting girls as young as 14 years old, Epstein appears to have laundered his money through financial institutions such as Deutsche Bank.

CNBC reported, the financial banking institution is being fined $150M dollars for their “significant compliance failures,” and for conducting business with Epstein, though they were well aware of his previous indictments. According to the Financial Services Department of New York, the bank had processed hundreds of million-dollar transactions that were questionable, and that should have prompted the German central bank to investigate further into Epstein’s history.

The transactions that were processed by the bank included payments to Epstein’s business partners, who were alleged to have been co-conspirators in Epstein's child sex trafficking ring. Settlements and payouts to legal firms totaling approximately $13M dollars were uncovered. Cash withdrawals amounting to more than $800, 000 over a span of 4 years also came to light, and the Financial Services Department of NY were quick to call out Deutsche Bank’s failure in addressing and flagging these suspicious financial activities.

The Bitcoin Community was quick to point out Deutsche Bank’s lack of judgment. They indicated on social media platforms such as Reddit that financial bankers on Wall Street are generally quick to dismiss Bitcoin as simply a facilitator of payments for terrorism activities, illicit criminal behavior, and drug trades, but that “douche bank” — Deutsche Bank — just settled for a $150 million dollar fine for helping Epstein finance child sex slaves.

Bitcoin advocates stipulate that there is a lot of money laundering ongoing with traditional financial services. According to Chainalysis, more than $1 trillion cryptocurrency transactions took place in 2019, but only 1.1% of them were found to be illicit.