Blockstream Samson Mow on Scalability: Bitcoins are Tanks while Altcoins are Bicycles

Towards the end of 2017, the cryptocurrency market was in a state of delirium. Bitcoin set record price after record price and reached a peak of around $20,000 USD per token. During this market frenzy, a huge issue long-suspected by educated developers was finally revealed—the bitcoin network had become overloaded and was running against the limits of its capacity, unable to scale beyond seven transactions per second. 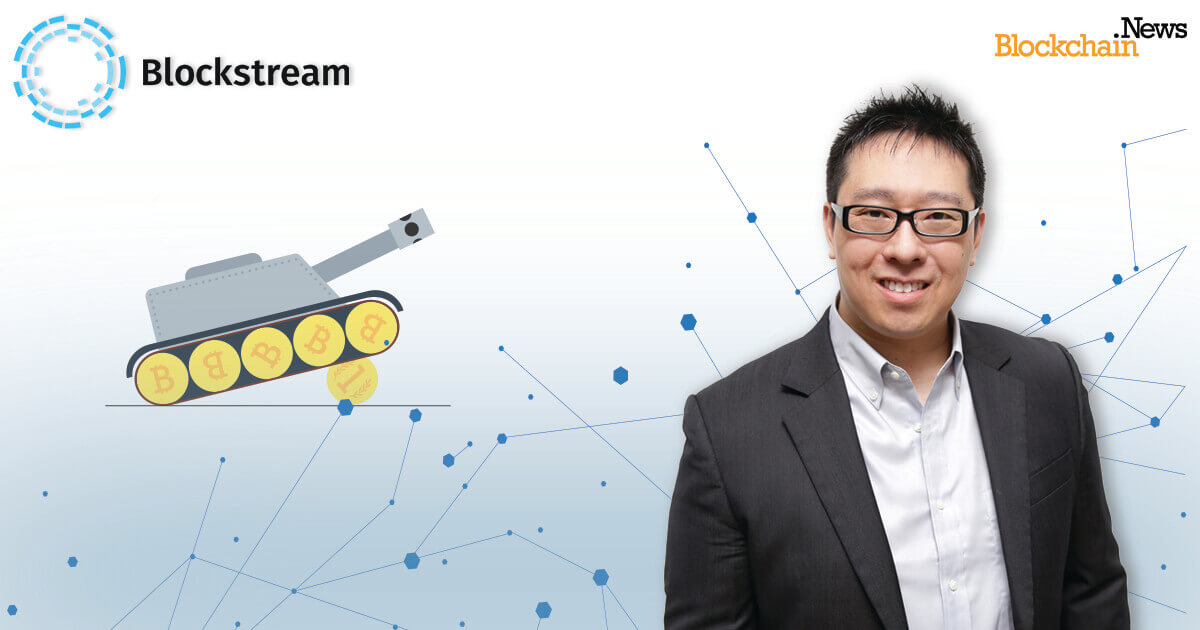 Samson Mow is an entrepreneur and marketing strategist who is currently serving as the Chief Strategy Officer at Blockstream. Samson Mow is known as a Bitcoin expert and he is often invited to speak on panels and give presentations at blockchain events and conferences. He rose to some prominence in the community from his famous bitcoin scaling debate with Roger Ver—AKA Bitcoin Jesus, at Deconomy 2018.

We caught up with Mow at The Capital by CoinMarketCap in Singapore. He discussed the Liquid and Lightning Networks and his thoughts on the future of Bitcoin scalability.

Mow originally worked as a video game developer and founded Pixelmatic in 2011. He was working on creating engaging social games when he first heard about Bitcoin in 2013. Mow said, “I was reading the news and came across an article about Bitcoin. I found it very interesting because it was like an in-game currency that no one controls. Soon after I worked for BTC China (BTCC), a cryptocurrency exchange and mining pool as the COO. Following this, I became very interested in the infrastructure layer of the Bitcoin protocol and joined Blockstream.”

Blockstream does a lot of very interesting work at the protocol level of Bitcoin itself, building second-layer solutions to make scaling more efficient. Mow said, “I felt that I could bring a lot to Blockstream as I'm good with product marketing and business, which is traditionally what Blockstream has struggled with, as it was largely driven by engineering—not really business-minded people.”

According to Mow, many blockchain developers and industry experts are completely missing the point when it comes to Bitcoin and their criticism of its slow transaction speed. Mow explained “people like to talk about Bitcoin’s ability to only transact seven times per second. This criticism usually comes from altcoin developers and it’s usually because they have their own blockchain or coin which is touted to be able to transact 20X, 30X or even 50X per second. But if you really understand how blockchains work, the technology is actually not very conducive to fast transactions because the network needs to keep in sync. The reason there is a limit on BTC transactions per second is because we have ten-minute block times. So transactions work out to seven a second based on the total number per block divided by the ten minutes.” 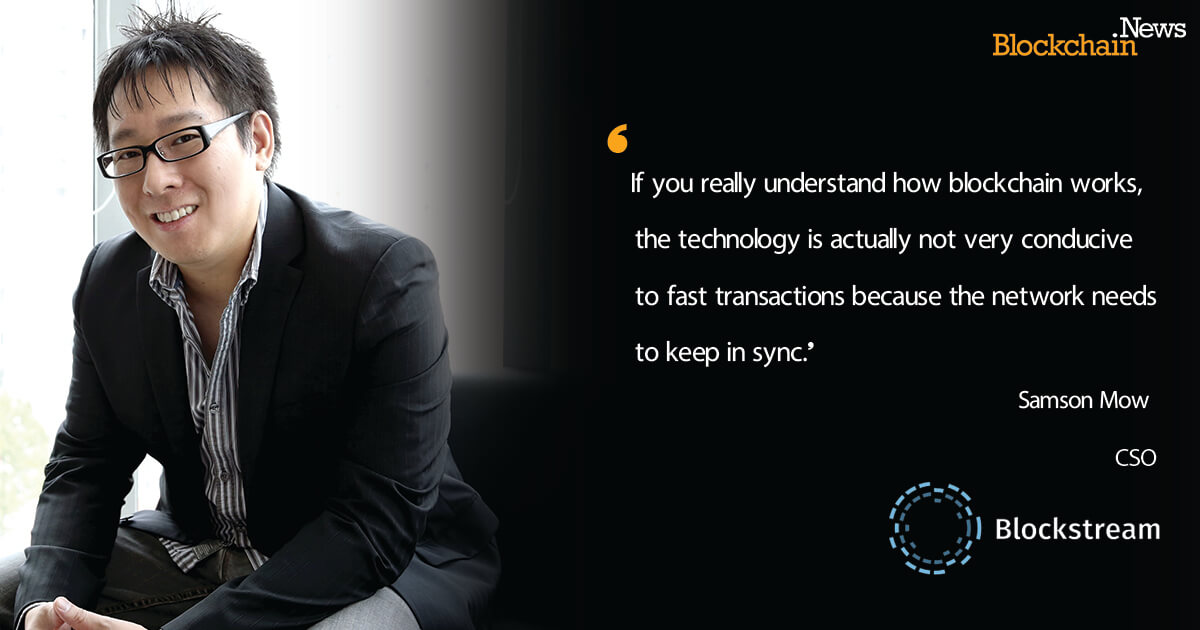 While other alternative blockchains are able to increase the number of transactions per second to 50, according to Mow, it really is not a gamechanger as a good payment network really needs hundreds of thousands of transactions per second. “The way to think about it correctly is: Bitcoin was designed to be a tank. And these other altcoin projects are selling you a bicycle, but it's two different roles basically. The bicycle will go faster than a tank, of course, but if you get shot with a bazooka, basically you're going to die whereas the tank’s architecture will protect you because it's heavily armored. So it's basically a conflation between two things–a payment system and a settlement system, and Bitcoin is a settlement system.”

Two of the key initiatives that have come from Blockstream are the Liquid and the Lightning networks. Liquid is a sidechain-based settlement network for traders and exchanges purportedly enabling fast and confidential BTC transactions and the issuance of digital assets. Lightning Network is a micropayments protocol that enables instant, low-cost BTC transactions.

Mow explained the difference between the two, he said, “Liquid is a Bitcoin side-chain, and what that means is—it's a blockchain that does not have its own native currency, it still has Bitcoin but in another format called Liquid Bitcoin (L-BTC).” By comparison, “Lightning does not have a blockchain per se. It is purely peer-to-peer; you connect to people that you need to connect to and route through the network. So it's quite different—and the benefit of Lightning is that the transactions are nearly instantaneous, and almost free which you don’t have with Liquid because it is a blockchain. Liquid does have faster one-minute blocks but we still need to keep the network in sync, so there is a limit there. Whereas in Lightning, there is no limit to how big the network can scale.”

Another key difference is that users can have hot and cold wallets in Liquid, but in the Lightning Network wallets are always hot. Mow explained, “they're always online, so your keys are technically exposed. But as people are receiving money through Lightning, they're going to close out channels and cash out.”

Paying off your Lightning Tab

As we pushed further into the protocols of the Lightning Network, Mow offered a simple yet powerful analogy. He said, “I guess the easiest way to conceptualize it for the average person is by comparing it to a bar tab. So you go to a bar and you want to have some drinks that night but instead of paying for your drinks one by one, you give them your credit card and open a tab and settle it at the end of the night.” He continued, “Lightning is similarly just aggregating transactions; you open a channel with someone and you can route through that channel. You don't need to broadcast all of your transactions through the blockchain because that would clutter it up.”

In the past, the crypto industry has witnessed the Bitcoin chain get clogged due to too many transactions, and this has consequently inflated the price of transactions. Mow reiterated, “a lot of those types of transactions are not really necessary. For instance, if you were to buy a cup of coffee—you don't need to put that in the Bitcoin blockchain.” In summary, he said, “the way lightning works is that you open a channel and when you open and close that channel, those are on-chain transactions, but everything else in between is counted as off-chain and does not require the blockchain to sync. So you have cost savings and faster transactions.”

On whether the Lightning Network could be overlaid onto other blockchain protocols such as Ethereum, Mow confirmed, “In theory, I would say yes. In fact, Ethereum has a similar concept to the Lightning Network called Plasma. Although I am unsure why you would need it as Ethereum is not supposed to be money.” He clarified, “it makes sense for any blockchain or cryptocurrency that is purporting to be money so it makes sense for Bitcoin. Because if the main layer is for settlement, then you need a layer for spending and lightning allows you to do so quickly.”

Mow added, “you can actually have a Lightning Network running on top of Liquid although we actually haven't implemented it before. But you can actually issue different assets in the Liquid Network. For example, we have Liquid Tether in our network, we have a Japanese Yen stablecoin and several others.” He concluded, “technically, if each of those has enough liquidity, like a lot of people have Liquid USDT, then you could create a Lightning Network on top of USDT.”

Micropayments and the Traditional Financial System

Micropayments are payments of less than a dollar (and in some cases, a fraction of a cent) that are usually made online. It is not common to be able to transact these amounts through traditional banking services. The latest technological advancements in FinTech, such as blockchain have brought about more exposure and inclusion into the digital world.

Mow offered his explanation for why banks were incapable of servicing the micropayment market efficiently. He said, “I think it largely has to do with cost. You can do small transactions through banks but what it comes down to is the cost as they take a fee of three to five percent because it's merchant processing, so it doesn't really make sense especially for a machine to machine payments—you don't want a 5% tax on top.” He continued, “technically, with the credit cards, you could do micropayments if you say it's like under $1. But again, it doesn't really make a lot of sense because the whole traditional financial system is very clunky. It's very old. And, you know, even interbank transfers don't work well. It’s just not really feasible to do these kinds of micropayments on that old network.”