The Bitcoin community watched from the edge of their seats as the BTC price briefly sank below to $3,900 before rebounding to between $5,300 and $5,500 in less than 30 minutes this morning.

At time of writing, Bitcoin (BTC) has temporarily stabilized at $5240, marking a loss of nearly half its value since March 7. The entire cryptocurrency market continued this week's free fall along with the traditional markets seemingly proving once and for all that Bitcoin’s hedge value has been over-stated. 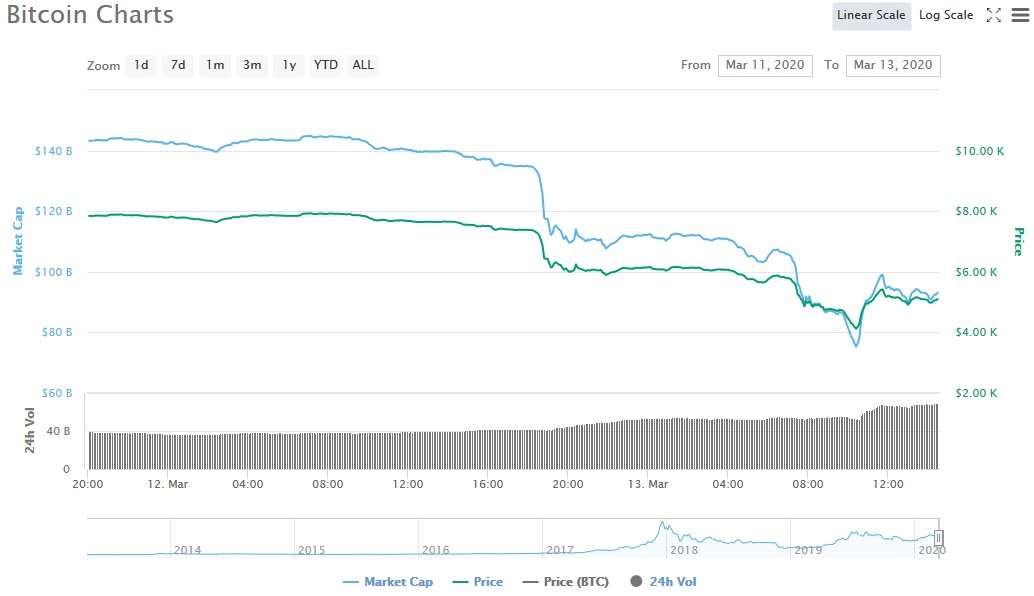 As the broader global trading markets plummet, equities have fallen triggering the third circuit breaker as the S&P 500 fell 9.5 percent drop on Thursday. This is the second time in a week trading was temporarily halted so that excess volatility could be reined in. The Dow Jones Industrial is down around 10 percent, while the Nasdaq has fallen 9.5 percent.

Cash and Stablecoins Not BTC and Gold

Only days ago we published pieces of the ongoing Twitter debate on Bitcoin’s safe haven status as markets worldwide have been gripped by growing fears over recent weeks as the coronavirus disruption ground manufacturing in China to a halt causing bearish global ripple effects and decreasing demand for oil. A break down in the alliance between Russia and the OPEC appears to be the straw that has broken the camel’s back as oil prices took their biggest dive in 30 years.

In the digital community, we’ve seen a lot of conversion from cryptocurrency into US backed stablecoins, particularly with Tether. As shown on CoinMarketCap, marketcaps on every stablecoin are up significantly over the last 24 hours.

As a third circuit breaker was triggered in the markets yesterday causing a second halt to trading this week, it appears that people are not turning to either Bitcoin or Gold in the face of the crisis but cold hard cash and their digital alternatives.