Bitcoin and Gold can Coexist, according to Goldman Sachs

After reaching levels never seen before, Bitcoin (BTC) has become the talk of the town after breaching the $22,000 level as it is currently trading at the price of $23,165 at the time of writing, according to CoinMarketCap. 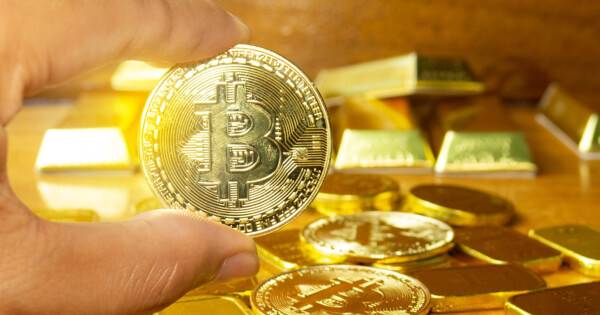 Investment giant Goldman Sachs has delved into the issue of how Gold and Bitcoin can coexist together because the latter is continuing to cement its status as a safe-haven.

Bitcoin steals the show as gold takes a beating

The recent BTC’s bull run is continuing to woo institutional investors to join the Bitcoin bandwagon, and this has seen the price go through the roof. For instance, on-chain data provider Glassnode recently revealed that BTC addresses with at least $1 million went parabolic after surging by 150% to stand at 66,540.

Gold has been taking a beating, and its underperformance has become a concern to many investors. Digital asset manager CoinShares noted that investment outflows from gold hit a record $9.2 billion in November.

Goldman Sachs believes that these statistics should not raise eyebrows about Bitcoin replacing gold as an inflationary hedge based on its rising popularity. The leading bank acknowledged:

“Gold’s recent underperformance versus real rates and the dollar has left some investors concerned that Bitcoin is replacing gold as the inflation hedge of choice. While there is some substitution occurring, we do not see Bitcoin’s rising popularity as an existential threat to gold’s status as the currency of last resort.”

Coexistence is of the essence

Goldman Sachs asserted that the coexistence between gold and Bitcoin was key even if more investors are giving the latter a keen eye. Institutional investors have been giving BTC an “outrageous demand” based on their spending spree and this has caused the price of the leading cryptocurrency to skyrocket by more than 15% in the last 24 hours.

Nevertheless, crypto trader, Edward Morra, has stated that caution shouldn’t be thrown to the wind because some Bitcoin whales are flashing red flags about the existence of sell walls, which indicate their willingness to cash in some profit.