Bill Gates, Microsoft Founder and billionaire philanthropist, has responded to conspiracy theories that his charity foundation is planning to use the coronavirus vaccine to implant microchips into the global population. The conspiracy itself appears to have started with a patent for a very innovative cryptocurrency mining system filed by Microsoft earlier this year. 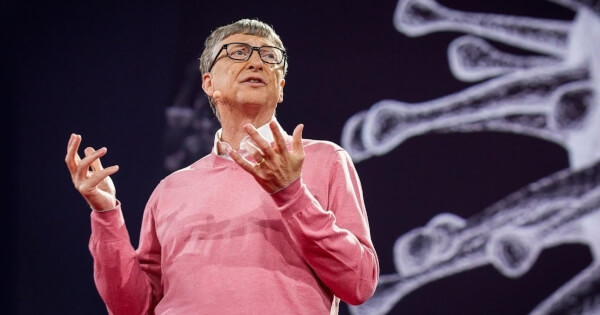 As reported by CNBC on 22 July, Bill Gates directly addressed a poll from Yahoo/YouGov that had shown 44% of Republicans in the United States believed a sensational and thoroughly debunked conspiracy theory—that he planned on microchipping the world population under the cover of a Covid-19 vaccine.

Gates dismissed the accusations as conspiracy and said he hoped that such misinformation would die down. “We need to get the truth out there,” said Gates during an interview on CBS News. “I hope it’ll die down as people get the facts.”

Gates also reasserted that his only goal is to bring the coronavirus pandemic to an end, and he will continue on that mission with his foundation.

In March 2020, Microsoft filed a crypto mining patent with the World Intellectual Property Organization (WIPO) for a new system that proposes using sensors, not microchips, to detect and calculate the amount of energy and time spent on a pre-determined activity, like engaging with an advertisement. The sensors apparently are capable of gauging both physical and brain activity and convert that sum into data which can be used by computers to solve computational problems and create new blocks.

The patent number of the Microsoft crypto mining technology – WO/2020/060606. The number, immediately caught the attention of Oscar-winning Russian director, Nikita Mikhalkov. The director immediately decided it was a satanic plot and appearing on Russian TV, he said, “The 060606 part is somewhat alarming…Is this a coincidence or an intentional selection of such a symbol, which in the Apocalypse of John is called the ‘number of the beast’ – the 666.” .

The director alluded to a loose connection between Microsoft's patent and the Bill and Melinda Gates Foundation's efforts to produce a vaccine for the coronavirus, and deduced it was a satanic conspiracy to microchip the world while failing to discover the patent had nothing to do with microchips. The TV appearance brought the conspiracy further into the mainstream and it even trended on Twitter for a time.

Mikhalkov has not been the only public figure to accuse Gates and his foundation of such a conspiracy. Many others including celebrities and public figures as well as members of the general public appear to have been influenced by the mass of disinformation. Recently, Italian politician Anna Cunial called for the arrest of Bill Gates as she believes he is on a mission to depopulate the world by up to 15% as head of a mysterious deep-state world government.

Despite all of these theories being thoroughly debunked—the survey from Yahoo/Yougov, found that around 28% of American adults believed that Gates planned to use a Covid-19 vaccine as a trojan horse to implant billions of people with microchips.

The means that at least 50 million people in the United States alone believe in this debunked conspiracy as recently as May of this year. In fact, there are several popular White House Petitions currently calling for an investigation into the Bill and Melinda Gates Foundation for crimes against humanity.

Gates Just Want to Ensure Covid Vaccine Access for Everyone

In the interview with CNBC on Wednesday, Gates said that people need to look at the facts and that he hopes these accusations continue to die down as people appreciate the problem the world is faced with in not having a vaccine to deal with the coronavirus outbreak—which has killed over 600,000 people globally.

According to the World Health Organisation, there are more than 100 vaccines under development and 23 in human trial. The Bill and Melinda Gate Foundation has pledged over 100 million dollars to support the WHO as well as an additional $1.6 billion to the Gavi Vaccine alliance.

Gates has previously expressed that he wants to ensure that the incoming viable vaccine is not sold to the highest bidder as another reason for his foundation's intense oversight of the Covid-19 vaccine development.