Microsoft may be entering the social media ecosystem should they acquire TikTok, in a deal that Bill Gates is calling a poisoned chalice. Meanwhile, Twitter is now rumored to be in talks with ByteDance—TikTok’s parent company—to potentially reclaim their old video Vines territory. 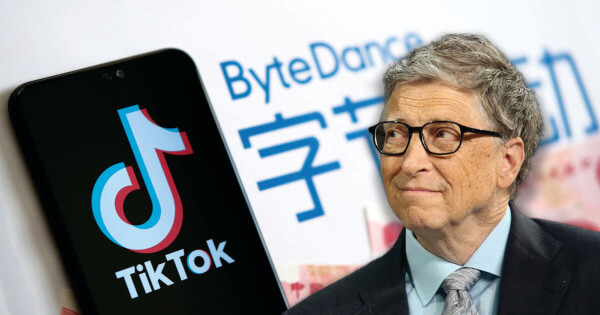 In a recent interview with Wired, Bill Gates described the potential Microsoft acquisition of TikTok as a poisoned chalice and admitted that he is confused by some of the terms set by President Trump, who suggested that the US Treasury will be expecting some cut of the deal.

The Wall Street Journal also reported that Twitter is now in discussions with ByteDance over potentially acquiring TikTok’s social media video app, an ironic twist as Twitter discontinued their Vines videos which essentially had already captured the market it now is trying to buy back into at a price that will exceed its own market cap.

TikTok Goes the US Acquisition Clock

After months of President Trump and United States officials expressing concern that data from TikTok’s users in the US is being shared with the Chinese Communist Party, the White House finally issued an executive order against the app last week, in addition to second order for China-based WeChat.

As the executive order loomed, Microsoft confirmed on August 3, that they are in discussions to buy TikTok’s operations in the United States as well as Canada, Australia, and New Zealand. The technology giant has been engaging with the White House on the deal that should be completed by September 15.

It’s a complicated deal that would give Microsoft a big presence in the social networking space at the risk of being part of a larger trade war between the US and China.

Bill Gates is clearly wary of Microsoft’s potential TikTok acquisition, he said, “Who knows what’s going to happen with that deal,” says Gates. “It’s a poisoned chalice.” He also believes that being a major player in the social media business would open Microsoft to a whole new level of content moderation.

Gates thinks that Facebook needs some competition and was critical on the lackluster way that certain conspiracy theories about Gates and his foundation were not taken down off Facebook’s platform before they had already achieved millions of views. Nevertheless, he said that Trump killing off Facebook’s main competition is still “pretty bizarre.”

In the interview with Wired, Gates also expressed his confusion about President Trump’s assertion that the United States Treasury should receive a cut of the sale of TikTok. He said, “The principle this is proceeding on is singly strange, the cut thing, that’s doubly strange. Anyway, Microsoft will have to deal with all of that."

Twitter Likely to Join in TikTok Bid, ByteDance May Sue

On Aug 8, it was reported by the Wall Street Journal that TikTok and Twitter have held discussions about a potential merger.

TikTok has amassed a global user of avid consumers for its short-form videos, including at least 100 million users in the US. A service eerily similar to the video Vines that Twitter discontinued on its own platform, and ironically a market it may have captured on its own if it had simply continued and enhanced the service.

According to the WSJ, Twitter and Bytedance have had preliminary talks about a merger of TikTok’s US operations—but noted that Microsoft remains the front-runner for TikTok’s business in the US, Australia, Canada, and New Zealand.

TikTok is estimated to be worth $15billion to $50 billion with the upper estimate almost doubling Twitter market cap of $29 Billion—this effectively means that a potential merger with Twitter would just be for TikTok’s North American business. In addition, any Twitter bid for TikTok business would likely have to include additional third-party investors.

ByteDance LTD, the parent of TikTok has continually been defending itself against President Donald Trump’s pressure to force the sale of the business or potentially ban it. There are reports that the Chinese tech company will sue the Trump Administration for the recent executive order, citing it as unconstitutional. The lawsuit is expected to be filed as soon as Aug 11.

Should ByteDance file their expected lawsuit, it could throw a further spanner in the works and may even frighten off would-be buyers of TikTok.

So far, Twitter and Microsoft are the only reported interested parties for Bytedance’s business, but others will likely emerge as the clock continues to tick on the executive order.