The FinTech Association of Hong Kong (FTAHK) is an independent, not-for-profit, member-driven organization that serves as the voice of the FinTech community in Hong Kong. Its members range from promising startups and passionate individuals to FinTech unicorns, global financial institutions, and leading professional service providers.

The FTAHK is governed by a volunteer group of board members from the Asian FinTech community. This year, the FTAHK has elected Benjamin Quinlan as Chairman to lead it through the next chapter of its mission to foster the FinTech ecosystem in Hong Kong and Asia. Quinlan is the CEO of Quinlan & Associates, a strategy consulting firm specializing in financial services and FinTech. He succeeds Henri Arslanian, who has completed his maximum two-year term. 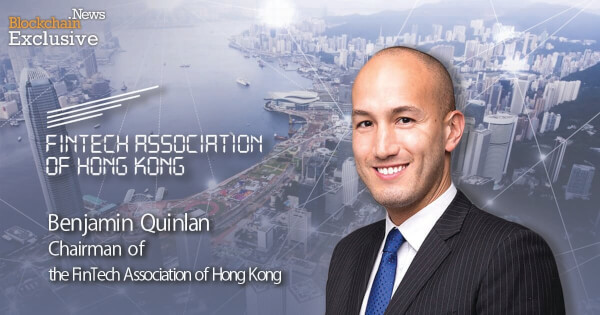 Blockchain.News caught up with newly elected Chairman Benjamin Quinlan to introduce him to our readers as one of the leading figures in the emerging and vibrant Hong Kong FinTech ecosystem and to hear his take on what the FTAHK 2.0 initiative is all about.

From the Board to the Chair

Quinlan has been a member of the FTAHK’s board for the last two years and sees the Chairman position as a natural extension of his board duties. As the FTAHK’s newly elected Chairman, Quinlan said, “My role is effectively acting as a spokesperson for the association and wider Hong Kong FinTech ecosystem, I will also be driving the build-out of our new strategy with the Board, our committee Co-Chairs, management team, and wider community to realize our FTAHK 2.0 vision—making sure to communicate our new direction and initiatives across relevant stakeholders.”

As the CEO of a prominent and reputable boutique consultancy, Quinlan & Associates, Quinlan has always been passionate about FinTech and he feels he is aptly placed in the FTAHK leadership as someone who understands the ecosystem at all levels. He said, “We are very passionate about FinTech, we understand the space very well, and we really like the people working in it— I think there's a lot that can be done for the community. As for my new role at FTAHK, it’s really about how to drive value for our members in the coming years.”

Challenges of a Fragmented Ecosystem

Financial Technology (FinTech) is emerging as a crucial pillar of Hong Kong's regional economy. As Quinlan steps into his role as Chairman, he explained some of the challenges that exist for innovation in the Asian sector. Quinlan sees the key challenges coming under four main pillars: Funding; Adoption; Talent, and Government Support.

Quinlan said, “A key priority and major challenge for many FinTechs is funding. A lot of the emerging FinTech firms struggle to access the right channels to get funded. Much of this reflects either a lack of awareness or connectivity. I believe there’s a real opportunity to help streamline the fundraising process through more centralized channels.” He explained, “Due to the smaller size of many of these fundraisers, there aren't many financial advisors out there who would be willing to support deals of this size, which is a major challenge in early-stage funding. This is being exacerbated by the fact that many VCs are looking to de-risk by investing in later-stage funding rounds for firms that have a proven track record of commercialization."

The second major challenge, according to Quinlan, is adoption—particularly in the B2B space. Quinlan believes adoption is hindered by the complex taxonomy of FinTech as an industry, which makes it extremely difficult for financial institutions to easily source potential solutions (e.g. industry-verticals such WealthTech, InsureTech, and Digital Banking etc.; technology horizontals such as AI, big data, cloud, and blockchain; application layers like cybersecurity, and payments; and thematic layers such as RegTech).

Quinlan said, “When you're talking about all these FinTech areas, a lot of them overlap and a lot of them do similar things.” He explained, “So for example, if I was saying, ‘I am an AI-enabled FinTech offering cloud-based cybersecurity solutions that are fully customized to local regulations’—then where do I fit into that ecosystem?”

The fragmentation of the sector makes adoption a complex process for potential users—there are over 600 FinTechs in Hong Kong alone. Quinlan said, “Another major issue with adoption is that the ultimate decision-making power for many global financial institutions, who have greater financial capacity and appetite to look at new solutions, resides in New York, London, or Zurich. For FinTechs in Hong Kong, this creates a need to establish global visibility and having the right conversations with people offshore. Moreover, many local financial institutions have considerably lower technology budgets than their global incumbents, which makes pricing strategy critical.” 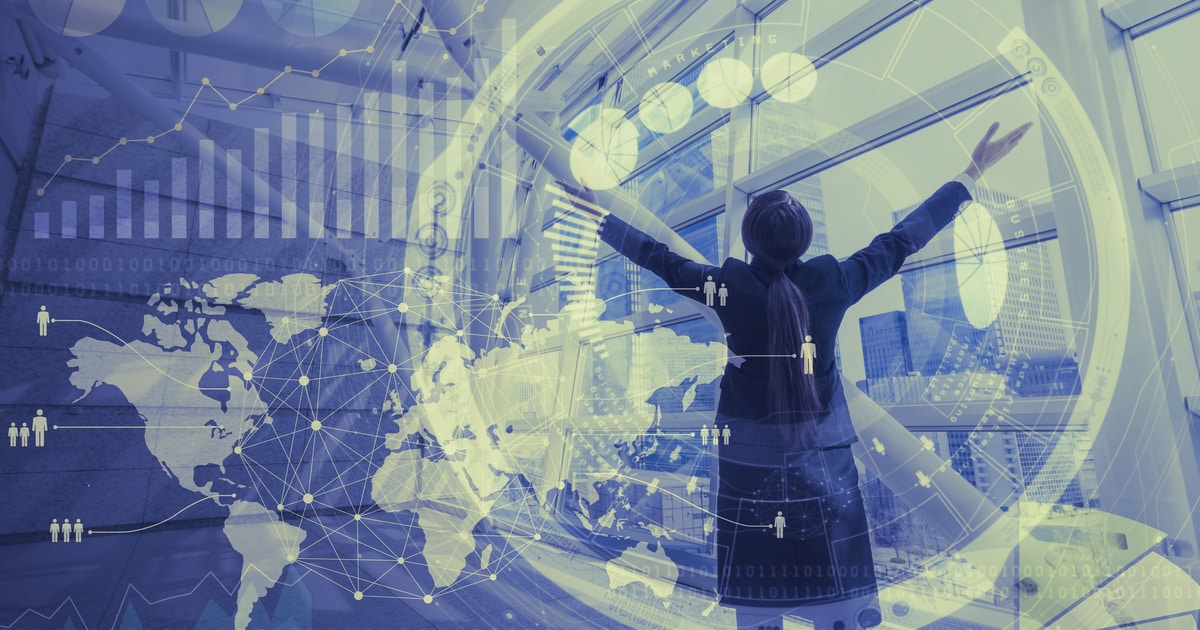 The third challenge to address is talent. Quinlan said, “While Hong Kong has a good local talent pool, it is limited. Given the ongoing geopolitical unrest, Hong Kong needs to think long and hard about how to bring the right expertise into the city to continue driving the ecosystem forward—be it data scientists, cybersecurity experts, or digital transformation specialists, these skill sets are in high demand across the entire globe, especially as companies are being forced to ‘go digital’. From Hong Kong's perspective, we need to work out how to attract and retain the best talent and keep them here—this remains a core priority for our ecosystem.”

According to Quinlan, the Hong Kong government's support has been well-received—not just toward FinTech, but across many industries in the SAR. He said, “Government support has gone a long way to addressing things like subsidizing labor and technology costs (e.g. through Technology Voucher program) and funding to hire new people, and through initiatives like the FAST program.”

While Quinlan asserts that the HK Government’s initiatives are a positive development in terms of alleviating cost pressures, he counters, “It's not addressing the revenue problem. You can subsidize as many of these costs as possible, but if the FinTechs firm is not yet billing, it has a very limited runway in terms of financial bandwidth. With funding being increasingly difficult to secure in this environment, and revenue streams drying up as financial institutions put a pause on their innovation spending as they focus on their core technology needs—it does create a tricky environment for FinTechs to stay alive for a sustained period of time. Many firms have, unfortunately, had to downsize.”

“Everyone knows that if you run a business in Hong Kong, one of the highest outgoings is rent. While the government has provided subsidies and rent-free periods for tenants in places like Cyberport, there are many FinTechs renting premises from private landlords, many of whom have not budged on rent. This is a major gap in terms of government funding support for many businesses in Hong Kong, not just FinTechs.”

Finally, Quinlan said, “The government could also do more to subsidize the costs of POCs for financial institutions, encouraging them to explore new solutions, many of which are being overlooked due to budget constraints.”

The FinTech Association of Hong Kong defines its mission as being to advocate, collaborate and educate withing the ecosystem. As Benjamin Quinlan settles into the role of Chairman, we asked him for his take on these three core goals of the FTAHK.

“Advocacy is about acting as the voice of the community, trying to find out and understand what they want, particularly in relation to policy design, and in the way that the government is supporting the ecosystem more broadly,” Quinlan explained, “From my perspective, it's very important to make sure we're front and center as an industry body to represent our members’ main interests, needs and wants—to represent the wider ecosystem. One of my jobs is to make sure that we can find out the main issues of our members and really spend a lot more time with them to understand their immediate concerns and priorities, after which we can more effectively lobby for outcomes that will benefit the entire ecosystem.”

The mission of collaboration, according to the new Chairman, relates to how the FTAHK work with its partners. Quinlan said, “The FTAHK is a very credible organization and has the largest online following of any FinTech association in the world. Right now, we have a great opportunity to work out who the key stakeholders are that we would like to collaborate with—be it in the private or public sector.” He added, “That collaboration process is going to be very important for us to understand how we can leverage the core strengths of various constituents in the ecosystem, and partner with them to drive mutual value delivery for our respective stakeholders.”

On education, Quinlan said, “From my perspective, FinTech is rapidly evolving—almost every day there's new tech solutions being developed, new providers, and new use cases. As such, it’s important to make sure our members are aware of the latest development in the industry. From educating university students on the fundamentals of FinTech and future career paths, to upskilling industry practitioners, the potential is vast.” He explained, “We will remain focused on distilling information our members need, including broader industry trends and our own research insights, acting as a centralized knowledge base for people in and around the FinTech ecosystem.”

FTAHK 2.0 and the Road Ahead

Riding on a fast track of growth since its inception in 2017, the FinTech Association of Hong Kong is set to embark on its mission to further support the development of Hong Kong's FinTech ecosystem. Benjamin Quinlan has been voted in by the Board to lead this next chapter of FTAHK’s growth through a vision he is calling “FTAHK 2.0.”

Quinlan said, “FTAHK 2.0 is in its infancy. I am currently working on a new strategy to build upon the extremely good work of the association and continue to grow our membership base, community engagement, and support the Hong Kong FinTech ecosystem.” 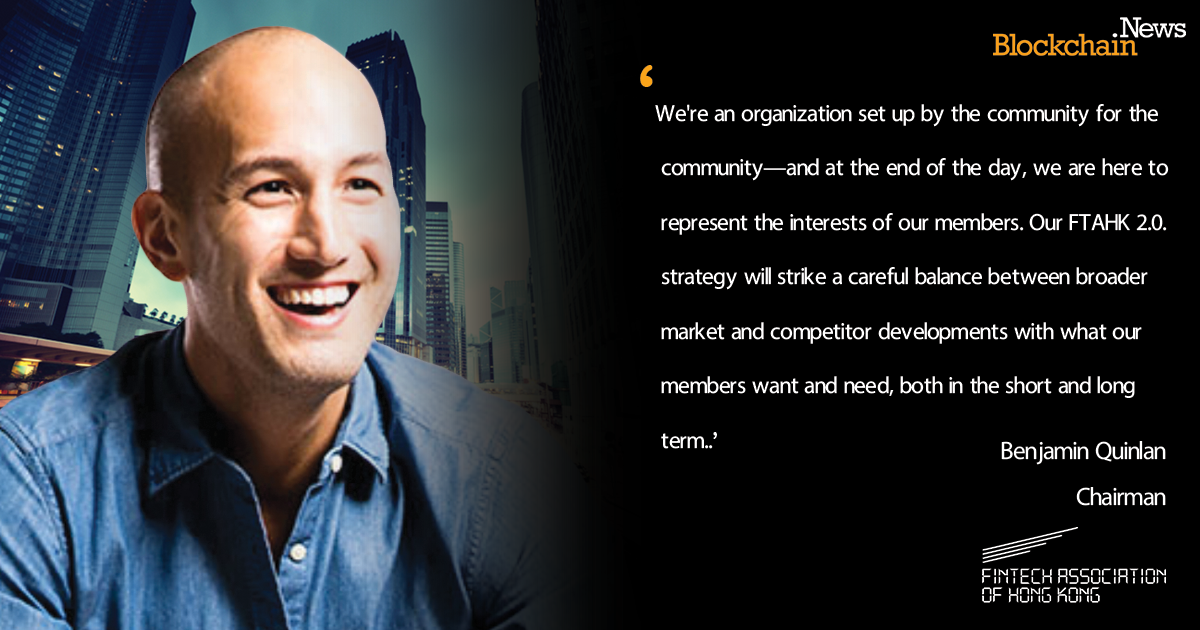 The FTAHK is in the third year of its lifecycle, and Quinlan asserts that there is now a need to revisit and review the association’s direction and make sure that, at its core, it continues to drive the most amount of value for its members. He said, “We're an organization set up by the community for the community—and at the end of the day, we are here to represent the interests of our members.” Quinlan explained, “Our FTAHK 2.0. strategy will strike a careful balance between broader market and competitor developments with what our members want and need, both in the short and long term.”

According to Quinlan, member engagement is critical to the association’s continued success. He said, “We just released a member survey to gauge our members’ needs and wants, which will be critical in prioritizing our strategic initiatives. There's a lot of things that we want to do, and we need to be able to address our community’s needs in an appropriately-prioritized manner.”

He concluded “We want to look at how we can leverage the vast amounts of data captured in our member database, as well as the expertise and credibility of our many members, to take our ecosystem to the next level. My ultimate vision is for the FinTech Association of Hong Kong to represent a model of global best-practice, where people across the world turn to better understand the international FinTech ecosystem. Ultimately, I want to create the frameworks and thought processes that other ecosystems and other associations around the world look to emulate.”