Asian Investors Have a Better Disposition to Crypto than Europeans and Americans, Fidelity Survey finds

A recently published survey backed by Fidelity Digital Assets Investments has showcased that Asian investors have a more positive disposition when compared to their European and American counterparts.

The survey involved 1100 respondents bordering on Financial Advisors, High Networth Individuals, and Crypto Hedge Funds or Venture Capital Funds. The respondents were profiled across each of the regions. 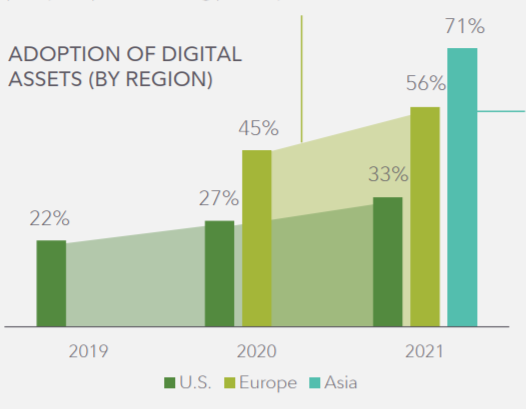 “We were not surprised to learn that Asia has the most institutional investors with allocations to digital assets of those surveyed. Historically, Asian investors have had a more positive view of digital assets and were early adopters of more traditional digital payments. For example, in China, a projected 32.7% of point-of-sale payments are made via mobile, double the UK (15.3%) and US (15.0%), according to OMFIF,” the Survey report reads.

The survey also showcased that about 44% of the investors said that the advent of the COVID-19 pandemic stirred the interest to bet on digital assets. This became necessitated as the pandemic fueled the increased inflation of the economy as trillions of Dollars were injected as palliative funds into the economy. In general, the survey highlighted that about 70% of all the survey participants say that they are currently invested in digital assets.