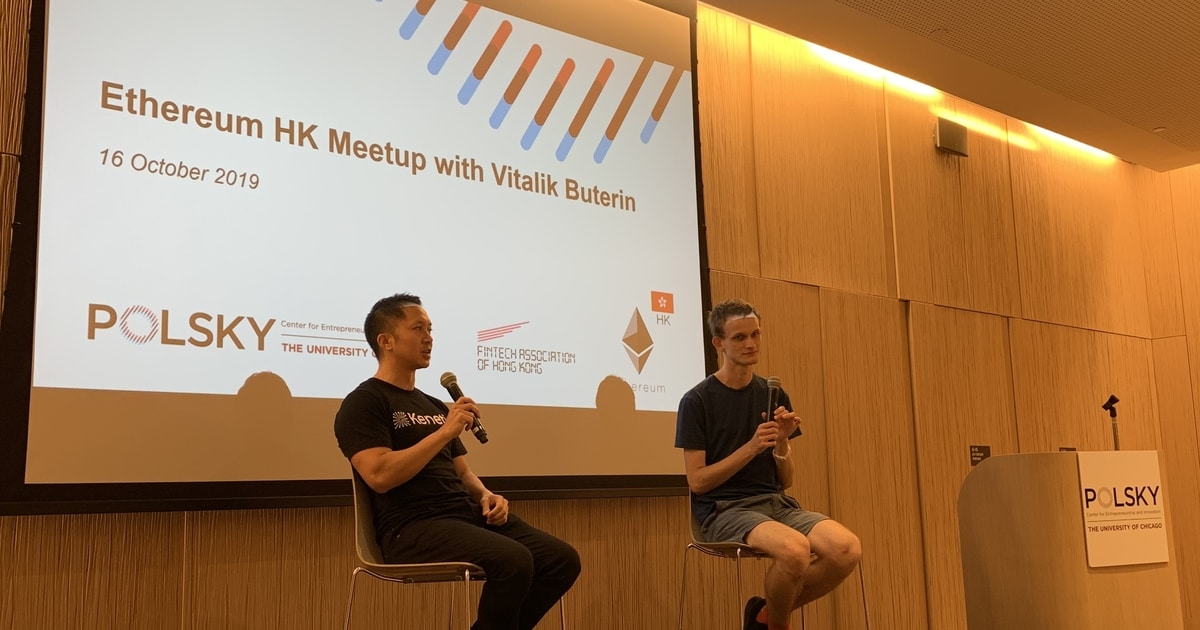 There are four major phases.

On recent developments, Buterin said, “Recently we’ve had this interoperability workshop in Toronto, where all of the engineering teams that are implementing it to clients got together and have gone to clients to have all the same protocol and speak the same language and talk to each other.”

“A lot of progress happened in the last one and a half months, we’re basically hurdling full speed ahead to having a public test network, which is the last major milestone before we can have on the network,” explained Buterin. 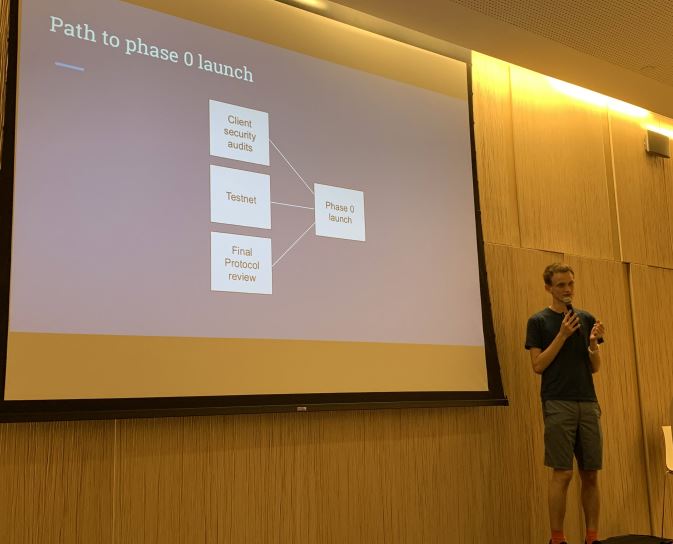 Currently, Phase One is continually being worked on, there has been a simplification, for example - instead of having shards talk to each other once every 10 minutes, and then you need to insert to your protocols if you want to move your stuff around more quickly. Shards can now communicate with each other every 10 seconds, and we do the work of making that happen efficiently enough. It turns out that this is something that kind of significantly increases the simplicity of the protocol and also decreases the complexity of the infrastructure to build to make the protocol useful.

There are a few teams starting to look into implementing Phase One, in parallel with all the work involved in getting phase zero to production quality. “The progress has been very active all around and we’re continuing to expect early next year to have Proof of Stake (implemented),” said Buterin.

Dubbed as “HackMD,” Buterin proposed the Eth2 shard chain simplification in early Oct. In this proposal, a persistent shard chain will be abandoned, and it’s replaced by every shard block which is a direct crosslink.

The number of shards is reduced from 1024 to 64 and the maximum number of shards per slot increased from 16 to 64. The “optimal workflow” is revised that there is a crosslink published for every shard during every beacon chain block. Other simplifications include less shard chain logic required, simplification of EEs and decentralized exchanges no longer needed to facilitate paying tx fees across shards.

The simplification proposal does come with limitations. There will be more beacon chain overhead with the attestation aggregation having an overhead of 307,200 bytes per slot in each shard. As there are more pairing from a maximum of 128 to 192 per block, the block processing time will increase by ~200ms.

A year ago, running an Ethereum full node was very difficult. Today, running an Ethereum full node despite the higher scalability and the accumulating junk in the blockchain, Buterin stated that running a full node is less difficult. Efficiency has vastly improved due to the development team; syncing has been sped up almost twice compared to its past pace. The Nethermind client is a new team that has developed new Ethereum clients.

After the Istanbul network upgrade which is expected to happen on the testnet this month and on the mainnet a month from now; Buterin suggested that we can expect to see about 4000 transactions per second in the absolute best case. The best-case scenario describes where people are just doing payments and everyone is running on a rollup, even in realistic cases, it can reach over 1000 transactions per second. 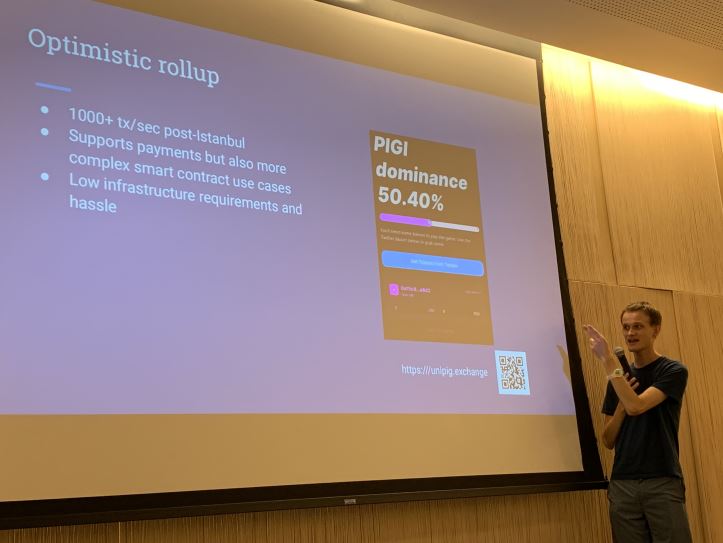 Unlike plasma channels, optimistic rollups do not have a hard time supporting things that are more complicated than payments, you can just run smart contracts and nothing. Optimistic rollup is this scalability technique that puts computation off-chain and puts data on-chain. Data is generally cheaper than computation and “we’re going to try really hard to compress the data. Basically, you can get something like two orders of magnitude of scalability gains. This is something you can use today and will continue to get better tomorrow,” said Buterin.

“Even if Ethereum 2.0 was delayed by another two or three years, this thing could carry us all the way until then,” said Buterin.

Rollups work great with point transfers, however, for virtual machine execution such as smart contracts, it does not work so well. Optimistic rollup, instead of using zero-knowledge proofs, use this mechanism where people publish blocks by default; optimistically, people assume that blocks are correct. Anyone has the ability to check every block if they would like and if they see that a block is invalid, they can submit a message to the blockchain that requires others to check the block as well.

zk-SNARK has existed for a while, and they have been already been using Zcash. “This year, especially the last few months, in large part thanks to Ethereum Foundation work but also supported by Zcash Foundation and supported by a lot of academic groups, we’ve seen a huge alphabet soup of protocols with funny names like ‘Plonk’, ‘Sonic’, ‘Marlin’, ‘Shark.’ These protocols are more efficient and more general-purpose than before,” explained Buterin.

As developed by Aztec Protocol, PLONK (Permutations over Lagrange-bases for Oecumenical Noninteractive arguments of Knowledge) is the new privacy tool to be implemented in Eth2.0. PLONK requires a trusted setup procedure similar to SNARKs in Zcash, in which users can use the “universal and updateable” trusted setup in any program. This allows multiple parties to participate in the trusted setup and the multi-party is fully sequential.

Besides, PLONK uses “Kate commitments” based on a trusted setup and elliptic curve pairings, yet this can be compatible with other schemes such as FRI and DARK, meaning that this commitment is compatible with use cases with different tradeoffs between proof size and security assumptions.

The Ethereum community is diverse in many ways. First of all, the Ethereum community has people in every continent of the world. We have people from the pure blockchain world and also from the enterprise world. It has always been a part of my vision to try to get these communities to collaborate with each other because ultimately, they have the same needs, right?

Anyone who uses blockchain wants privacy, from individuals who use blockchain applications to large enterprises. A lot of the time, there is an overlap of the things people want. 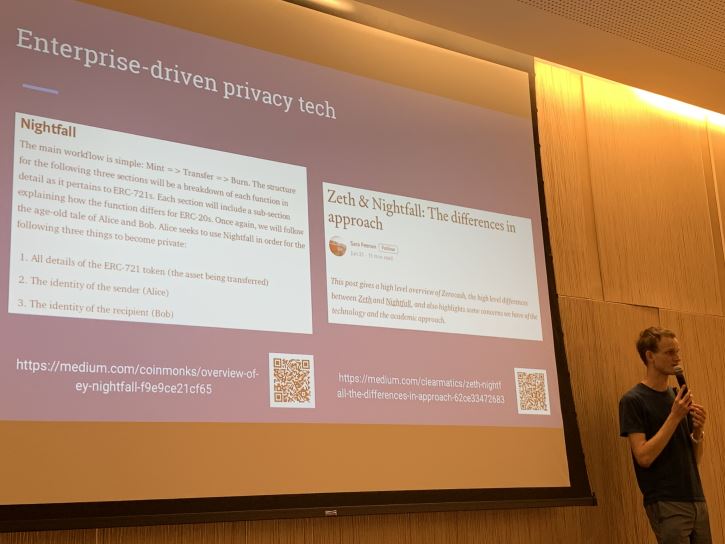 When these groups build something for its own use, a lot of the time that code can be taken and it can be repurposed for in other communities’ use.

We had enterprise focus groups, one is Nightfall by EY, the other is Zeth by Clearmatics, which is a company building its permissioned settlements solutions based on Ethereum for major banks and institutions. These two groups created a privacy solution and have open-sourced the code. 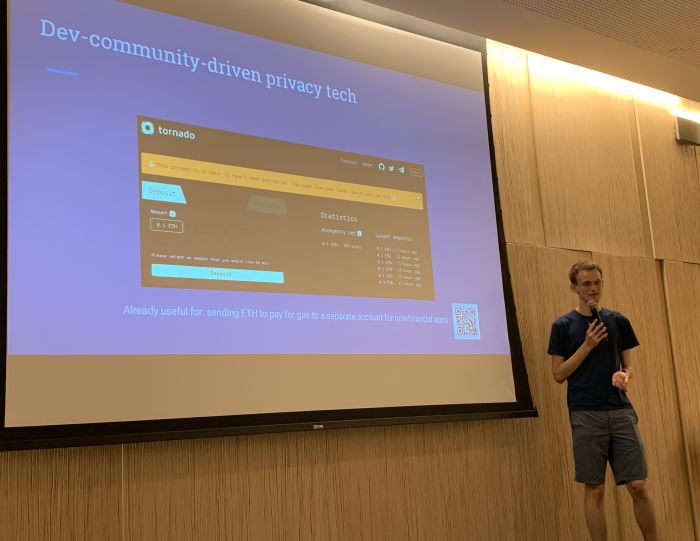 All of these technologies stack on top of each other - optimistic rollup, medium scaling, sharding, high scaling, optimistic rollup on top of sharding, high scaling, zk SNARKS, privacy, sharding, scaling. One of the popular privacy techs among developers is Tornado, which breaks the on-chain link between the recipient and destination addresses. Tornado uses a smart contract to accept ETH deposits that can be withdrawn by different addresses. When the new address withdraws ETH, the withdrawal cannot be linked to the deposit, which ensures complete privacy.

Governance technology matters for governing parameters to on-chain applications such as MakerDAOs, as well as “decentralized social media” applications. 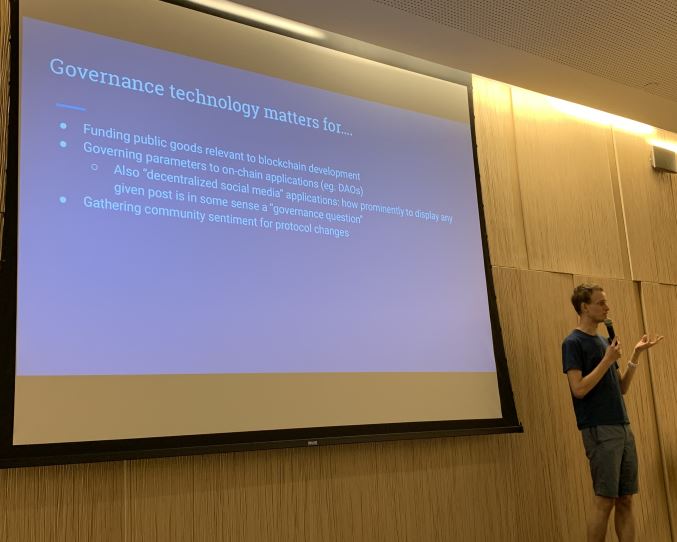 Privacy-preserving voting infrastructure is one example of governance technology. Decentralized governance involves certain forms of voting, but if all votes are public, this creates many problems. The public voting systems allow for transparency into understanding how people vote, causing interference of the mechanism in many ways.

Buterin suggested that this interference could be solved with cryptography. 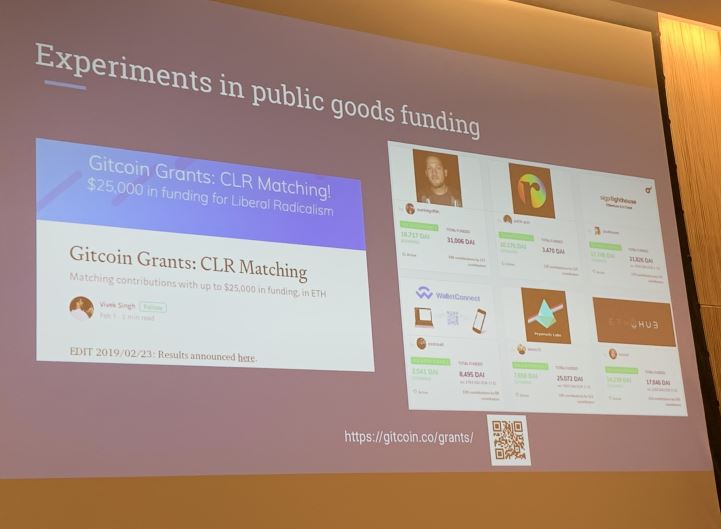 Quadratic funding is a unique approach to funding public goods, where individuals can donate money to individual projects. Based on how much money people donate, based on how many people donate to different projects, a mathematical formula is used to determine what kind of subsidy each project gets. “It’s actually this kind of really clever market mechanism that’s kind of like halfway in between a market and voting system,” said Buterin.

What’s next for Ethereum?

In the next two years, Ethereum will be on the “interesting journey” to upgrade the ecosystem to a new, more secure, more powerful and flexible set of consensus technology. Buterin stated that more developments to rollups, scaling technology, security, usability, and privacy. Buterin concluded, “Our ideas are tomorrow’s demos and our demos are tomorrow’s reality.”