McAfee Comes Clean on His Statement of Bitcoin, in Wake of His 'Dickening'

In recent news, John McAfee appeared to have retracted his previous statement regarding Bitcoin, now claiming he never believed that Bitcoin would hit $1 million dollar in pricing. 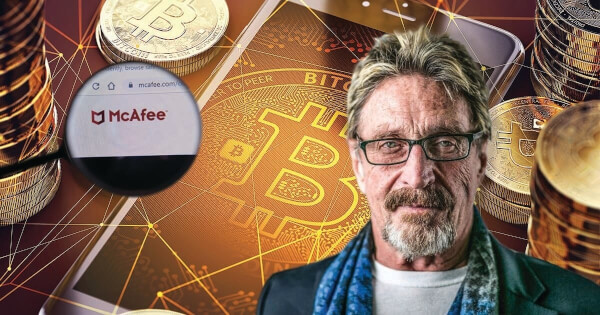 McAfee Knows It All for Bitcoin

The founder of one of the world’s top cybersecurity companies, McAfee Associates, predicted confidently in June 2017 that crypto’s top digital asset, Bitcoin (BTC), would hit a $1 million dollar per Bitcoin pricing by the end of the year 2020. He backed his claim by pointing to BTC’s supply, which caps at $21 million tokens, as well as the logic behind supply and demand of the digital asset, in wake of 7 million Bitcoins currently being lost and making the crypto asset scarcer to get a hold of.

At the time, McAfee criticized crypto investors on their negativity regarding BTC, taking to his social media platform and tweeting:

“Bitcoin is at the mid 10’s and people worry. LMFAO? Why do you pay attention to the weekly fluctuations? […] It’s rising drastically. I’m still positive about my $1 mil BTC price by the end of 2020.”

At the time of recording, BTC had lost 9% that week and was trading a bit above $10,300 on the crypto market.

On June 2017, McAfee also furthered his claims and publicly declared that he would “eat his own dick on national television” if Bitcoin did not hit $500,000.

Currently, BTC is estimated to be priced at around $9,130 on the crypto market. The digital asset’s price must increase by more than 5,376% in order to meet McAfee’s prediction.

When questioned about the $1 million dollar per BTC topic, McAfee was quick to point out that it was all a ruse and that his bet was not set to be for July 2020, but rather, for the end of the year- December 2020. He quoted a website that was dedicated to his bet, called Dickening.com, and proceeded to tweet that he never ever believed that BTC would hit $1 million dollar in pricing. He said,

“My Bitcoin bet date has always been Dec 31st 2020 (see link). When asked in July if I was going to eat my dick in three years I naturally said yes. Didn't mean in July for f**** sake! Did I believe that number? Of course not! But I'll still eat my dick. Just wait.”

Rather, he reiterated that he just wanted to eat his dick on national television and that he stood by his bet, in that sense. McAfee stated that Bitcoin was also worthless and that he never believed in it:

“Not going to get out of it. I never believed Bitcoin would hit $1 mil. It's absurd. Ir's an old, tired, worthless coin. I just wanted to eat my dick on TV. Wait for it."

The founder of the Device-to-cloud cybersecurity company McAfee also allegedly claimed that his famous 2017-million-dollar Bitcoin price prediction was simply a ruse to gain new users. The eccentric crypto investor is known for his outrageous claims.

Bitcoin investor and host of the Keiser Report Max Keiser was quick to call McAfee out on his bluff, stating sarcastically that John McAfee was currently busy honoring his bet – to bite off his dick. The famous host quipped at the McAfee CEO by tweeting that the latter must be in the hospital currently recovering from “biting off his dick,” since “Bitcoin wasn’t at $500, 000.”

What’s in the Gift Box for Christmas?

For McAfee to get away with this one, BTC price would have to gain at least 10,000% by the end of the year.