Bitcoin Needs to be Consolidated at $35K Level, Analysts predict

Bitcoin was up by 1.78% in the last 24 hours to hit 35,215 during intraday trading, according to CoinMarketCap.

Bitcoin (BTC) has been consolidating between the $30K and $40K range for more than two months, although it nosedived from an all-time high of $64.8K recorded in mid-April. Furthermore, the leading cryptocurrency recently dropped to lows of $28K as China’s crypto mining crackdown intensified.

A crypto trader tweeting under the pseudonym VryptoX believes that a breakout in the BTC market is imminent. 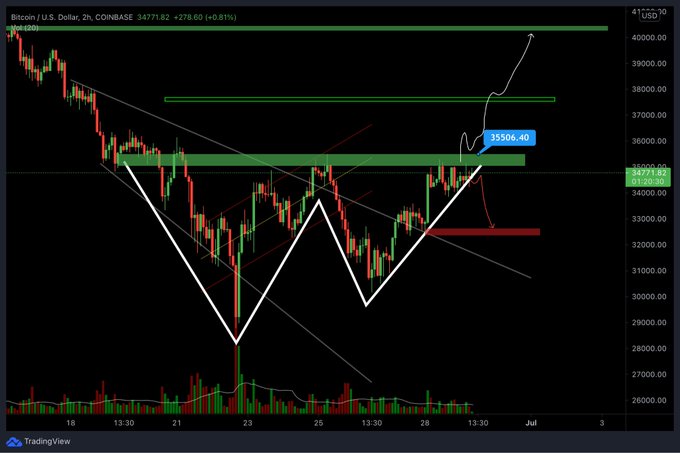 These sentiments were echoed by another trader who noted:

“If Bitcoin doesn’t fall below 32K within the next 48 hours, We are probably to rise sharply to 39K and 42K Zone.”

Meanwhile, the deadlock stuck on the BTC network is believed to be caused by long and short-term holders, as recently disclosed by market analyst William Clemente III. He explained:

Bitcoin needs to sustain the $33,000 area to grant support 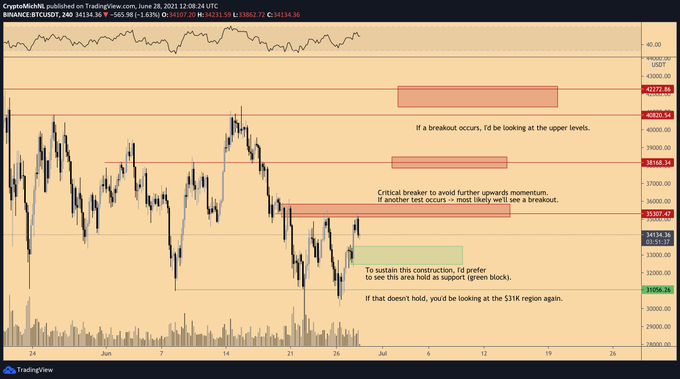 Therefore, whether Bitcoin will sustain momentum to trigger a breakout to the upside remains to be seen.

Meanwhile, some crypto experts believe that Bitcoin mining might become more accessible and lucrative due to China’s restrictions recently.

They noted that BTC miners who remain active post-China’s crackdown are expecting to be more profitable, given that once more miners away from the Bitcoin network, fewer computational guesses per second are needed to find the mathematical solution.