Bakkt BTC Options Trading Falls To Zero: What Does This Mean for Mainstream Adoption?

When the Intercontinental Exchange (ICE) announced its plans to launch the Bakkt Bitcoin physically settled futures trading platform, many believed it would act as the trigger for mass institutional adoption of cryptocurrency.

Yet the platform has so far failed to show any signs of being the catalyst for the mainstream and here we are at the start of a new year and trading volumes on Bakkt for options on Bitcoin futures contracts have effectively fallen to zero.

As the majority of cryptocurrencies have been in a bullish state since the start of the year, what does the lack of the regulated and institutional platform’s BTC options mean for the market?

Ten Days with No Options

Popular analytics firm Skew posted a tweet on Tuesday, highlighting that Bakkt had not recorded any trading on Bitcoin options on its platform for ten straight days. This figure is supported by ICE’s own website which also records zero trades from Jan 20 – Jan 24. In fact, it would appear that the last trade was 20 bitcoins which occurred on Jan 17. 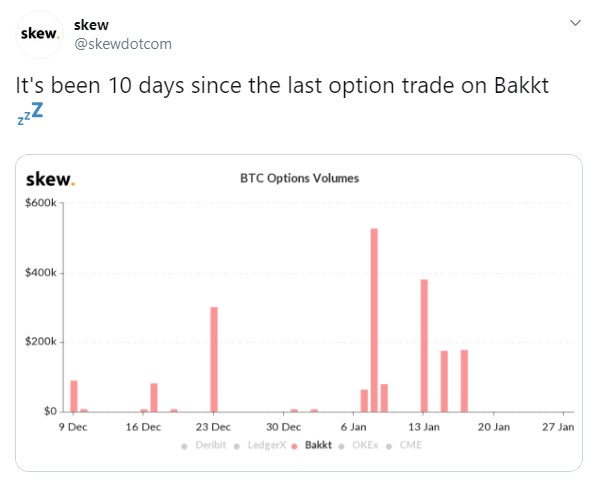 Bakkt’s options futures have so far performed poorly at best and they were soundly outmatched by the unregulated exchange Deribit in their opening week.

Are the Institutions Ready?

The impetus behind Bakkt was to create a safe and regulated environment where larger institutions, corporation, and investors would feel comfortable leveraging for access to the nascent crypto market.

The trading volume or lack thereof seems to indicate that these larger investors are still weary of cryptocurrency. While it would be over eager to expect mass adoption right now, the slow build is a little slower than most would have expected.

Although the platform is not currently being heavily utilized, the fact that it exists and has the backing of ICE—which also owns the New York Stock Exchange—is a significant step in bringing Bitcoin and cryptocurrency to the mainstream. At least when the big boys finally come to play, there will already be a venue ready for them.