Hedera Hashgraph is a decentralized public network built to support developers and decentralized applications and with a publicly stated mission to bring a layer of trust to the internet. Hedera Co-Founders Mance Harmon and Dr. Leemon Baird invented and developed the hashgraph—which is fast being recognized as an alternative public ledger technology that solves the same fundamental issues that are currently preventing blockchain from achieving mass adoption.

In this first part of our exclusive interview with Hedera CEO and Founder Mance Harmon, Blockchain.News gets the details on the Hedera Hashgraph’s beginnings, Google Cloud joining the growing Hedera Governing Council and the implementation of the Coronavirus HashLog to combat the Asian outbreak.

In the 1990s, Harmon was working for the US Air Force conducting research in machine learning and intelligence. It was in this role that he first met future business partner and co-founder of Hedera, Dr. Leemon Baird.

Harmon would go on to teach cybersecurity at the Air Force Academy before he and Baird left the military to become entrepreneurs in the identity and access management space. They founded two companies within this space prior to starting Hedera, both of which were sold to private equity firms.

It was in 2013 that Harmon and Baird became interested in distributed consensus systems. Harmon said, “Specifically, Leemon decided he wanted to solve the problem of how you maximize security at the protocol level and achieve something called asynchronous Byzantine Fault Tolerance - the theoretical limit, in terms of security, for a distributed consensus algorithm -  while at the same time maximizing performance in terms of throughput.” He continued, “In 2015, Leemon solved the problem. Today we call that the hashgraph.”

The discovery of the hashgraph was so profound and compelling that Harmon and Baird knew they had to bring it to the market. Harmon said, “In 2015 we founded Hedera Hashgraph to begin to develop and commercialize the hashgraph technology, and we’ve have been working on it ever since.”

While the hashgraph is not a blockchain, it is a decentralized public network. The impetus behind Hedera is to resolve the four fundamental issues which are preventing mainstream market adoption of public ledger technology — performance, security, stability, and governance.

According to Harmon, “Hedera is the only public ledger that uses hashgraph consensus, a faster, more secure alternative to blockchain consensus mechanisms. Hashgraph works efficiently to verify transactions while ensuring the highest standard of security to prevent malicious attacks.” He explained, “Hashgraph achieves high-throughput with 10,000+ cryptocurrency transactions per second today and low-latency finality in seconds from its innovative gossip about gossip protocol and virtual voting. Once consensus is reached, it is available on the public ledger for everyone to transparently see.”

“The network is governed by the Hedera Governing Council, which will comprise up to 39 blue-chip, multinational entities from a diverse array of industries. The Governing Council was designed to ensure decentralized and responsible governance for a next-generation distributed ledger. As a result, developers can confidently build secure, fair, blazing-fast decentralized applications.”

Hedera has been very open with how their governance structure worked, so much so that it was suspected that David Marcus, Head of Libra, had copied the idea following a 2018 conversation with Harmon, when the Hedera CEO had approached Facebook to solicit its membership.

The coronavirus outbreak in China has ignited a panic of misinformation globally, spread via social media channels and in some cases, there have even been accusations alleging that Beijing has supplied inaccurate data to the World Health Organization (WHO).

As the virus continued to spread and increase its tally of confirmed cases, the inconsistency of information shared with the WHO continued to grow, prompting Acoer to develop the Coronavirus HashLog. The HashLog facilitates the easy tracking and data-visualization of the outbreak, it is built to interact in real-time with, and is powered by, Hedera Hashgraph.

According to Harmon, “The Coronavirus HashLog allows people to understand the spread of the virus and trends over time, from an ever-growing set of public data. Acoer is using the Hedera Hashgraph public distributed ledger to help address the challenge of data integrity."

Breaking it down further he said, “Within their HashLog product, Acoer uses Hedera to help epidemiologists and others to verify the integrity of records that have been uploaded to their analytics systems, supporting their data provenance algorithm. Each transaction is recorded through a verified hash reference on Hedera’s ledger, meaning users can trust data to be legitimate and unable to be tampered with after the fact.”

Each piece of data that is visualized in the dashboard is tracked from end to end and audited through the DLT allowing Acoer to create a “chain of custody” to ensure that the information displayed is exactly the data that has been collected. Acoer’s HashLoad file collaboration platform uses the same algorithm.

“Given the current level of mistrust and confusion around various data sources related to the Coronavirus, this kind of computational trust is important in the ongoing collection and distribution of data to multiple parties.” said Harmon, “The whole Acoer team is working tirelessly to bring an unprecedented level of visibility, consistency, and trust to an important set of data being used by scientists and others around the world.” 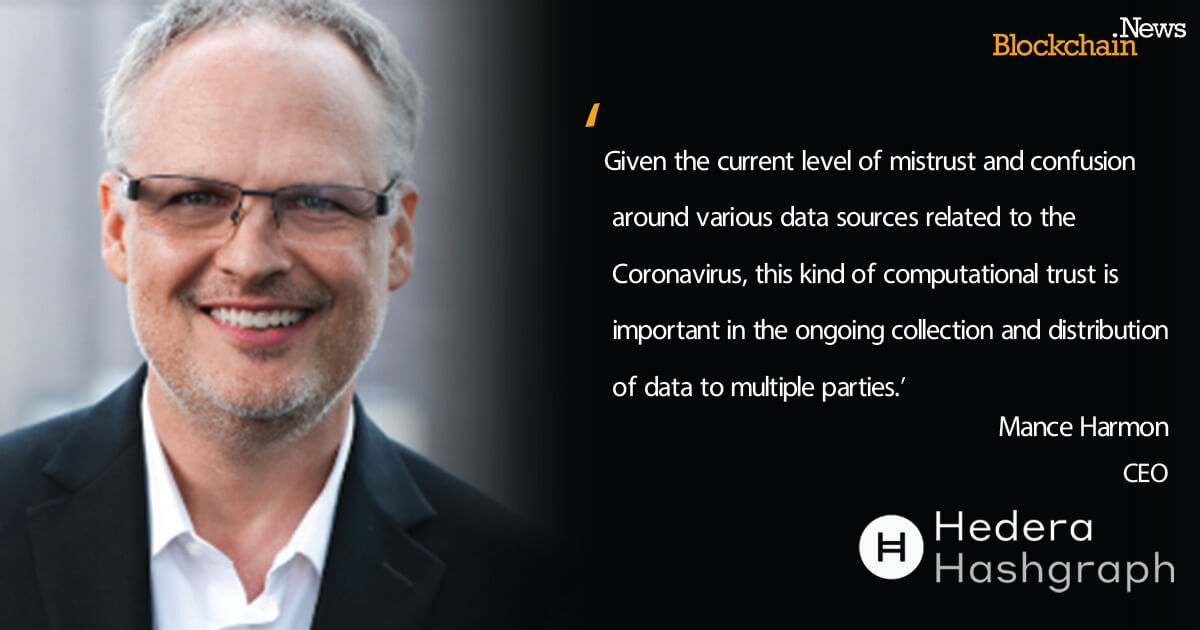 The HashLog had been in development prior to the Coronavirus outbreak and is a data collection and visualization tool that, as of today, includes three sub-projects:

Harmon said, “When the Coronavirus broke out, the team at Acoer was able to quickly and easily create a ‘Coronavirus HashLog’ that offers the capabilities above, specifically for datasets focused on the virus.”

The HashLog aims to bring together data sets, to help researchers easily search and visualize them, to verify their provenance and data integrity on an ongoing basis, and by putting all these data sets in one place, to hopefully make it easier for researchers to spot patterns over time. Harmon said, “Some of the more recent datasets added to the Coronavirus HashLog are Twitter trending data and also clinical trial data around vaccines, which is really exciting for researchers and the public to be able to see.”