Commissioner Hester Peirce, affectionately knowns as ‘CryptoMom’, believes the SEC’s court victory over Telegram was inappropriately reached and has further stifled innovation for the United States. 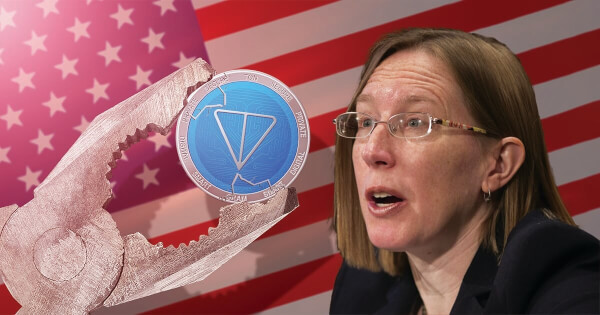 Securities and Exchange Commissioner (SEC) Hester Peirce spoke out against the SEC’s motivations and actions in prohibiting the Telegram Open Network from distributing Gram tokens anywhere in the world.

In her speech at Blockchain Week Singapore on July 21, Crypto Mom Peirce discussed the role and responsibilities of the SEC, and her sentiments on the decision against TON appeared to echo those expressed by Telegram CEO Pavel Durov who found the court’s decision unjustified and an abuse of US power.

SEC Governs Through Enforcement not Guidance

Commissioner Hester Peirce gave a speech entitled, “Not Braking and Breaking” where she referenced the Telegram decision in June to highlight how the SEC was stifling innovation and how the regulator should be responding to similar projects.

Peirce began with the disclaimer, “The views I represent are my own and not necessarily those of the Securities and Exchange Commission or my fellow Commissioners.” She would later add, “I share these thoughts in the spirit of transparency and with the hope that they will further my efforts to work collaboratively with my colleagues to provide certainty on how a token distribution can be done without running afoul of the securities laws.”

In 2019, the Securities and Exchange Commission filed emergency action and obtained a temporary restraining order against Telegram Group Inc. and its wholly-owned subsidiary TON Issuer Inc. for conducting an unregistered, ongoing digital token offering, GRAMs tokens, in the US and overseas which had raised more than $1.7 billion of investor fund.

The SEC has been heavily criticized by the blockchain and crypto community for its tendency to regulate innovation through enforcement actions of a perceived breach of its rules—rules that it will not necessarily clarify for any party involved. Peirce takes issue with this behave and she said, “Enforcement actions can be instructive to people other than the wrongdoer but are not and appropriate mechanism to create new laws. Our regulatory integrity demands that enforcement actions be premised on a violation of a clearly articulated statute or rule.”

Commissioner Peirce went on to highlight that the SEC had not really protected anyone but had in fact simply scared off, “Would-be innovators, who will now take additional steps to avoid the United States.”

While Commissioner Peirce has officially dissented against the SEC’s decisions in the past and admits she is often “outvoted”—her speech at Blockchain Week Singapore is the first time she has publicly opposed the Securities and Exchange Commission stance against Telegram and TON.

Following the SEC’s court victory against Telegram where they successfully blocked TON from distributing GRAM tokens anywhere in the world, Telegram CEO Pavel Durov published a long explanation online which was entitled, "What was TON and Why is it Over?"

In summary, Durov explained that the primary reason to abandon the project ultimately came down to the US regulators somehow being able to encroach on the sovereign rights of other nations and dictate where Grams could be distributed for the entire world.

The Telegram CEO further reiterated that the US courts were exceeding its own jurisdiction and deciding what is best for the rest of the world and believes that they are exploiting their control over the dollar.

Commissioner Peirce touched on this point in her speech, and highlighted that she believed the SEC had overstepped its boundaries through its influence. She said, “While the United States certainly has the most robust capital markets in the world, and while we work hard to preserve those markets with a fair and efficient regulatory structure, we would do well to recall that our way is not the only way. We should be cautious about asking for remedies that effectively impose our rules beyond our borders.”