Cryptocurrencies have rallied higher as Tesla announced its recent $1.5 billion purchase of Bitcoin. Against all odds, the current bull market has also benefitted XRP, sending it above the $0.50 level. Currently, it is up approximately 8% in the last 24 hours and its trading volume has also increased. The position of the Relative Strength Index (RSI), which rests below the overbought level, suggests that the bulls have the upper hand on XRP at the moment. 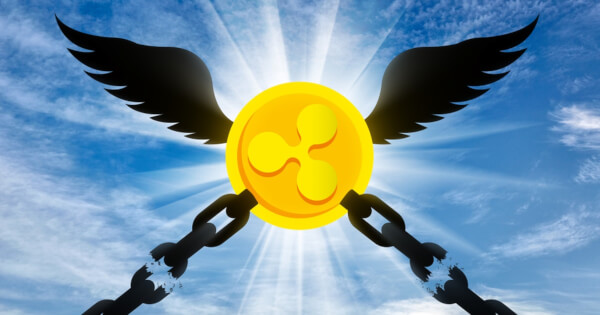 In the current crypto bull market, it can be seen from the daily candlestick chart that the XRP price has broken through the downward channel line we have previously drawn. Buyers are currently trying to stabilize the price above $0.50 and form a definite upward channel, which will stamp in the fact that this is not a fake breakthrough.

In recent days, XRP prices have all closed above the rising 9-day moving average. Candlestick chart prices have all closed above the exponential moving average ribbon and a series of exponential moving averages of different lengths show a long arrangement, illustrating that the bulls have an advantage. If the price stabilizes above $0.50 and the trading volume gradually increases, the first high point in front of the first target of the upward movement is approximately $0.584. If the price expands at this level, the upward trend may hit the highest point, which is around $0.70 dollars.

If the bulls are not strong enough to maintain the price at about $0.50, the price trend may fall back to near the upward pressure line in the near future. If investors hold XRP, they can sell on rallies. Plan profit is realized. At the same time, you can wait for the opportunity of a callback to cover your positions on dips and pull down the average. If the price pulls back, XRP price  support level will fluctuate from the previous low of $0.37099 to $0.47 in the short term.

Although there has been a lot of speculations on the endgame for XRP as the SEC pursuing Ripple Labs – the company that created XRP – for unlawful sales of the cryptocurrency had washed away a major part of the cryptocurrency’s market cap, the token seems to have regained a bit of strength. Additionally, despite its trades currently being largely prohibited in the United States, trades in the Asia Pacific area for XRP are still on the rise.

Meanwhile, Ripple Labs, the company that created the XRP cryptocurrency, is facing heat from not only the SEC but also former investors. With the SEC announcing it considers XRP as unregistered securities in the US, many investors have also joined forces to serve Ripple with a class-action lawsuit.

A recent filed motion led by plaintiff Bradley Sostack has requested that Ripple be obliged by the court to hand over its email communications with the US Securities and Exchange Commission that date back to January 1, 2015.

Currently, a court hearing for the filed motion is set for March 25. Ripple appears to have its hands full as it is awaiting trial to begin on February 22 with the SEC, where the debate of whether XRP is really a security will be brought to court for an official ruling.