Blockchain for Gun Control in the US: The Great American Dilemma

August 1, 1966, began just like any other day in the town of Austin, Texas. Summer weather in the Lone Star State is bone dry, scorching, uncomfortably hot, with a daily average of 96.3F. August 1, 1966, was, in fact, the hottest day of that month, as daytime temperatures reached 104.9F. 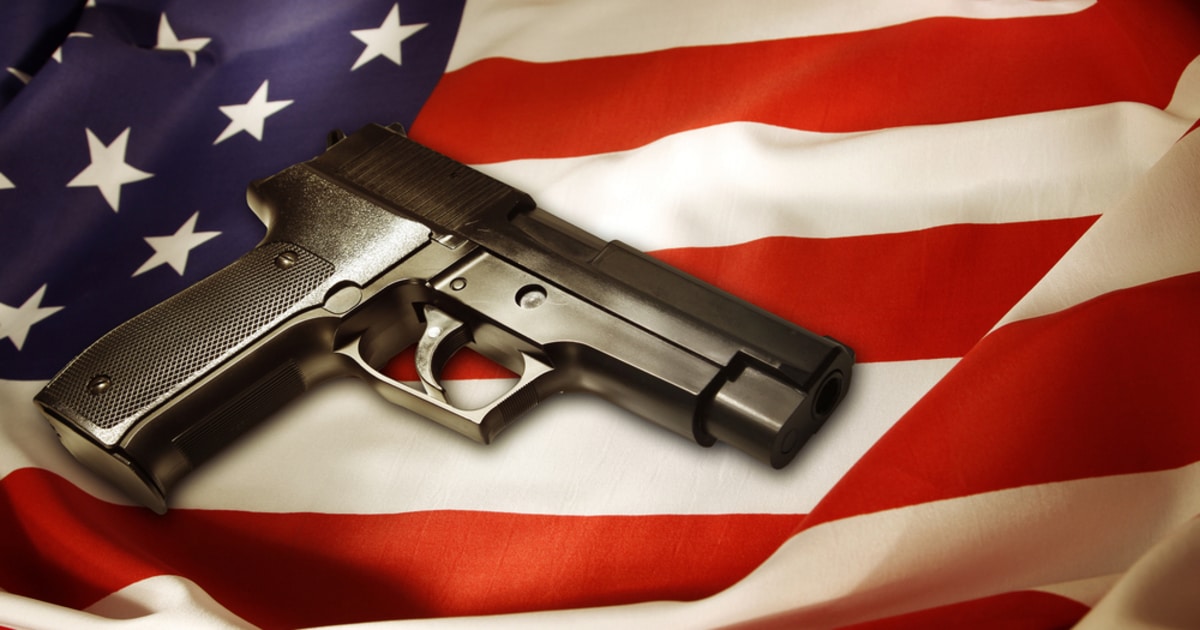 The sun blazed high in the clear sky over Austin, but the town would soon become acquainted with a now all too common darkness.

The University of Texas is one of Austin's best-known landmarks, and one of the town's most recognizable buildings. The university campus' nickname – The Forty Acres- comes from the fact that the state of California had originally earmarked that exact amount of land to build the university in.

The Forty Acres is now a square-shaped tract of land bordered by 21st Street, Guadalupe Street, 24th Street, and Speedway, with College Hill standing at the center, anchored by the campus' Main Building, atop which sits The Tower.

Rising 307 feet up into the air, The Tower is one of the most recognizable landmarks in the entire state, and sadly, it became the scene of a tragic mass shooting in 1966.

On August 1, 1966, Charles Whitman, a former Marine and student at the university, armed himself with several automatic weapons, took a vantage position at The Tower's Observation Deck, and began shooting. He killed 14 people and wounded 31 others before being shot dead by a police officer and a civilian. The incident became the deadliest mass shooting by a lone gunman in the United States up to that point. Whitman's grim record would stand until the San Ysidro McDonald's massacre 18 years later. And the death toll from mass shootings has steadily risen ever since.

The issue of gun control in the United States: A brief overview

Gun violence in the United States has been a problem for decades. An estimated 1.4M people died from firearm-related incidents in the United States between the years of 1968 and 2011. This figure includes all deaths involving firearms, including suicides, homicides, and accidental deaths.

Gun ownership, and the constitutional enshrining of the right to bear arms, has been one of the most hotly debated issues in the history of the country. Mass shootings occur in the United States with alarming regularity, and every time one of these incidents takes place, the debate is briefly reignited, only to fade away once more when the dust settles.

In practicality, lawmakers have done next to nothing to alleviate the issue of gun violence across America. Gun lobbyists, weapon manufacturers, and the deeply-rooted idea that guns are there 'to protect' people have ensured that guns are still widely available across the country, and are relatively easy to access by just about anyone. And despite virtue-signaling and vapid discourses by people across the entire political spectrum in America, it appears that there's very little real appetite to change the status quo when it comes to gun ownership and availability.

In his paper "A Blockchain solution to gun control, Thomas F. Heston, an Associate Professor at Washington State University, says " Blockchain technology can be utilized to improve gun control without changing existing laws. Firearm-related mortality is at epidemic levels in the United States and not only has a significant impact on public health, but it also creates a large financial burden. Suicide is the most common way guns kill. Through better gun tracking and improved screening of high-risk individuals, this technological advance in distributed ledger technology will improve background checks on individuals and tracing of guns used in crimes."

America has had a long-standing love affair with guns, going as far as enshrining the individual's right to bear arms in the Constitution's Second Amendment. In other words, not only is it legal to own a gun, but it's actually a basic right of the American citizen to do so. Only two other countries (Mexico and Guatemala) have made such provisions in their constitutional documents.

Gun culture is deeply embedded in the psyche of the American people. The roots of this trait can perhaps be traced to the country's very origin. The American nation was born out of a thirst for independence from the British Crown. The American Revolutionary War, also known as the American War of Independence (1775-1783) was a bloody struggle to defeat British forces and turn America into an independent state. The birth of the free United States occurred on July 4, 1776.

It is important to note that America did not have a standing army at the time. The war against the British (who had the largest standing army of the era) was fought by armed militia, rather than enlisted men. In other words, men and women came together and armed themselves to repel a foreign ruler. The War of Independence ultimately ended with the defeat of the British and the rise of the United States as a free nation. And it also meant that the notion of an armed militia (i.e., of ordinary people arming themselves against a common foe) became ingrained into the collective mind of America. The Second Amendment, ratified as part of the Bill of Rights in December 1791, hammered that point home. Today, the United States has the largest standing army ever assembled by any nation. And one could argue that it also has the largest militia, too, in the form of the National Guard. In a somewhat ironic twist, America's common foe is itself.

Acquiring guns in the United States is a relatively easy and straightforward process. Anyone intending to purchase a gun will have their name checked against three databases: National Crime Information Center (NCIC), the Interstate Identification Index (III), and the NICS Index. If no match is found, the sale can proceed. This usually takes mere minutes. In case that the database finds a match, three days are granted to allow for further investigation, so even these databases might prove useless. And crucially, background checks are not required if the transaction is between private parties. Stricter measures to curb the acquisition of firearms have been vehemently opposed by the NRA, even in the face of massacres such as the Vegas shooting on October 1, 2017, where a 64-year-old Nevada native named Stephen Paddock armed himself with fourteen AR-15 rifles (all of them equipped with bump stocks), eight AR-10 rifles, a bolt-action rifle, and a revolver and began shooting from his room on the 32nd floor of Vegas' Mandalay Bay Hotel. By comparison, the police report filed after Whitman's death stated that the shooter had gone up the clock tower with two rifles, a carbine, three pistols, and one sawn-off shotgun. Paddock killed 58 people and injured over 400 as he sprayed concert-goers at Las Vegas Village, a concert venue directly below his hotel balcony. The motivations for the shooting died with him.

The incident -the deadliest mass shooting in the United States to date- re-ignited the perennial debate about gun control in the country, and while the NRA did call for 'additional regulations' for bump stocks (these are devices that enable semi-automatic weapons to fire faster, like an automatic weapon would), the organization also said that it was 'time to further relax laws permitting Americans to carry concealed firearms.'. The incident caused some seemingly illogical consequences, too. Stock prices for gun manufacturing firms rose significantly in the immediate aftermath of the attack, for example, and when US President Donald Trump visited Vegas three days after the shooting, he responded 'we're not going to talk about that today,' when questioned about the introduction of further gun control measures. Donald Trump is a fervent defender of the Second Amendment.

Heston's paper delves into the possible role that blockchain can play in the control of firearms, focusing on three particular aspects: Background checks, gun tracking, and the development of a stable economic environment. In other words, a holistic approach to the controversial issue of gun control.

All background check queries are routed through single hubs of information, centralized databases in other words. A centralized database carries two inherent weaknesses: One, it presents a ready-made target for a determined hacker, and two, it is prone to human error. An FBI report highlighted the fact that as many as 3,000 people manage to pass the database background check every year, and might have been able to access guns when they shouldn't.  A blockchain-powered system presents a far higher fault tolerance factor than single-point databases because data is distributed across network nodes, each containing an identical copy of the information.

Blockchain technology can also become an effective method for tracking guns and gun ownership. There currently are an estimated 393m plus privately owned guns in the United States, to a population of just over 328m in 2019. In other words, there are more than 120 guns owned per 100 people.  The reality is that there are probably far more guns than that.

Many of these guns are registered. The vast majority are not, which leads to the question of where are all these guns? Who owns them? Who owned them before? Blockchain could track the path of a gun like no other technology would, by marking every single gun with a unique digital print, similar to a QR Code, at the point of manufacture. From that point on, the path of that gun can be accurately traced, with every intermediary -individual, organization, or third party- being immutably registered on the chain.

Though there is no 'hard' definition of what constitutes a 'mass shooting' in the United States. Some sources refer to it as 'mass killing', that is, an incident involving firearms in which three or more people lost their lives. Regardless of the terminology, gun-related deaths rank in the thousands. Using the 'mass killing' metric, for example, USA Today reported a total of 1,358 fatalities between 2006 and 2017 alone.

Blockchain can become a valuable technological asset for gun control in the United States and elsewhere, for sure, but gun ownership and use -for legal, or illegal purposes- is a far deeper issue that runs into the very fabric of what American society is today, and has been since its very inception. Unless attitudes radically change, both in the political sphere and within American society as a whole, the body count will only go one way.