The crypto community had been waiting with bated breath to see Bitcoin’s next move as low volatility had engulfed this market. BTC seems to be giving a hint on where it is headed because the top cryptocurrency gained considerable momentum and edged surpassed across the psychological level of $40K before falling back.

Bitcoin was up by 29.62% in the last seven days and hit the high of $40,499.68 over the last 24 hours, according to CoinMarketCap. As a result, the BTC funding rate flipped positive in what Lex Moskovski, the CIO at Moskovski Capital, terms “from doom to bloom.” 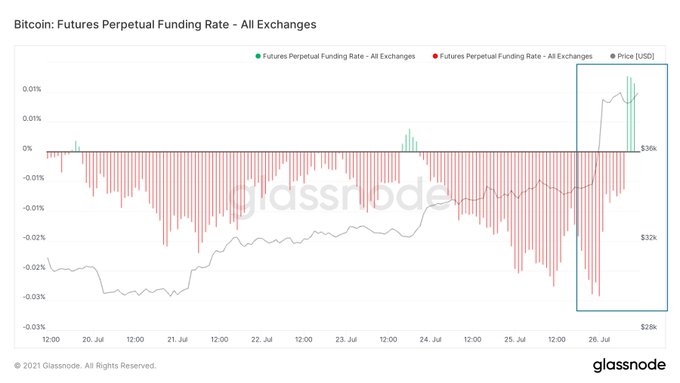 Prior to the latest surge, the BTC funding rate was neutral as the leading cryptocurrency found itself in a dormant position amid an intensified crypto mining crackdown by Chinese authorities.

2.1 Million BTC slid back to profitability

“As Bitcoin prices rally higher, over 2.1M BTC have returned to profitability based on their realized price. This indicates that 11.2% of the circulating supply has an on-chain cost basis between $29K and $38K.” 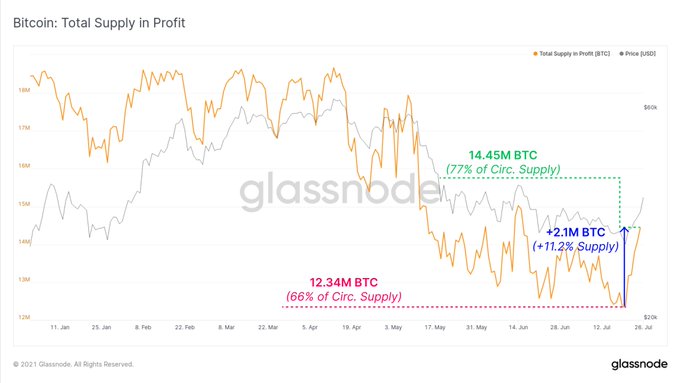 Meanwhile, Bitcoin’s hashrate seems to rebound as BTC mining is shifting from the East to the West, while the U.S. is emerging as the biggest beneficiary. For instance, the US share of hashrate skyrocketed to 16.8% from just over 4%.

The BTC derivatives market is bullish, as acknowledged by IntoTheBlock. The data science firm explained:

“Bullish signs on Bitcoin Derivatives Market. 1) Positive funding rates across several major exchanges for the first time in over a month. 2) Perpetual Swaps volume above $86b today (June 26th was the last time). 3) Open Interest is increasing as well (8th consecutive above $10b).”

As BTC continues moving to strong hands, whether this will cement the return of a bull run remains to be seen.