Bitcoin (BTC) gained some momentum over the weekend after dropping to the $32K level. The leading cryptocurrency was up by 2% in the last 24 hours to hit $34,371 during intraday trading, according to CoinMarketCap.

Market analyst Lark Davis believes that Bitcoin is eyeing a big move because volatility will soon go through the roof. He explained:

“Volatility is coming! Bollinger bands width approaching the massive lows that indicate a big move. Basically a ticking time bomb at this point.” 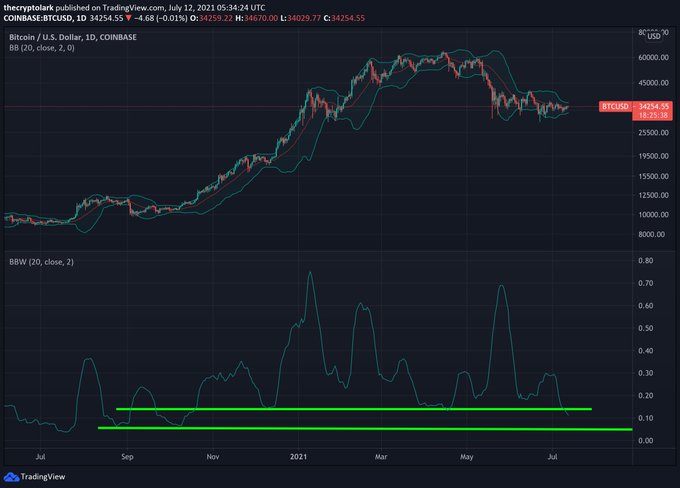 “It's official (see shaded orange), Bitcoin is entering its first major volatility squeeze since the one that pushed the price down off ATHs in April and the one that propelled us into the bull run in July 2020. Not a common occurrence.”

Bitcoin has lacked considerable energy to push it out of the $30-40K range for more than two months recently after the plunge from an all-time high (ATH) of $64.8K recorded in mid-April.

As a result, the crypto community has been waiting with bated breath to see its next move.

Bitcoin has been leaving exchanges in droves, as recently revealed by crypto analytic firm Santiment.

Therefore, BTC has been finding its way into cold storage, which signifies a holding culture. This is a bullish sign because it reduces the chances of a considerable amount of Bitcoin being sold off, which could drive its price down based on market forces.

As Bitcoin continues eyeing a clear direction outside the $30K-40K range, whether the speculated big move will happen sooner than later remains to be seen.

Meanwhile, the amount invested by institutions and corporates in the Bitcoin market is a small per cent of their total cash reserve. Notably, there are around 41,000 publicly traded companies globally, of which less than two dozen have taken positions in Bitcoin.