On Feb 11, 2009, Satoshi Nakamoto posted a thread titled "Bitcoin open source implementation of P2P currency", outlining the development of new open source P2P e-cash system: Bitcoin, and the rationale behind it such as root problem of conventional currency: Trust.
Original Thread: Bitcoin open source implementation of P2P currency
2009-02-11
I've developed a new open source P2P e-cash system called Bitcoin. It's completely decentralized, with no central server or trusted parties, because everything is based on crypto proof instead of trust.
Give it a try, or take a look at the screenshots and design paper: Download Bitcoin v0.1 at http://www.bitcoin.org
The root problem with conventional currency is all the trust that's required to make it work. The central bank must be trusted not to debase the currency, but the history of fiat currencies is full of breaches of that trust. Banks must be trusted to hold our money and transfer it electronically, but they lend it out in waves of credit bubbles with barely a fraction in reserve. We have to trust them with our privacy, trust them not to let identity thieves drain our accounts. Their massive overhead costs make micropayments impossible.
A generation ago, multi-user time-sharing computer systems had a similar problem. Before strong encryption, users had to rely on password protection to secure their files, placing trust in the system administrator to keep their information private. Privacy could always be overridden by the admin based on his judgment call weighing the principle of privacy against other concerns, or at the behest of his superiors. Then strong encryption became available to the masses, and trust was no longer required. Data could be secured in a way that was physically impossible for others to access, no matter for what reason, no matter how good the excuse, no matter what.
It's time we had the same thing for money. With e-currency based on cryptographic proof, without the need to trust a third party middleman, money can be secure and transactions effortless.
One of the fundamental building blocks for such a system is digital signatures. A digital coin contains the public key of its owner. To transfer it, the owner signs the coin together with the public key of the next owner. Anyone can check the signatures to verify the chain of ownership. It works well to secure ownership, but leaves one big problem unsolved: double-spending. Any owner could try to re-spend an already spent coin by signing it again to another owner. The usual solution is for a trusted company with a central database to check for double-spending, but that just gets back to the trust model. In its central position, the company can override the users, and the fees needed to support the company make micropayments impractical.
Bitcoin's solution is to use a peer-to-peer network to check for double-spending. In a nutshell, the network works like a distributed timestamp server, stamping the first transaction to spend a coin. It takes advantage of the nature of information being easy to spread but hard to stifle. For details on how it works, see the design paper at http://www.bitcoin.org/bitcoin.pdf The result is a distributed system with no single point of failure. Users hold the crypto keys to their own money and transact directly with each other, with the help of the P2P network to check for double-spending.
Satoshi Nakamoto http://www.bitcoin.org 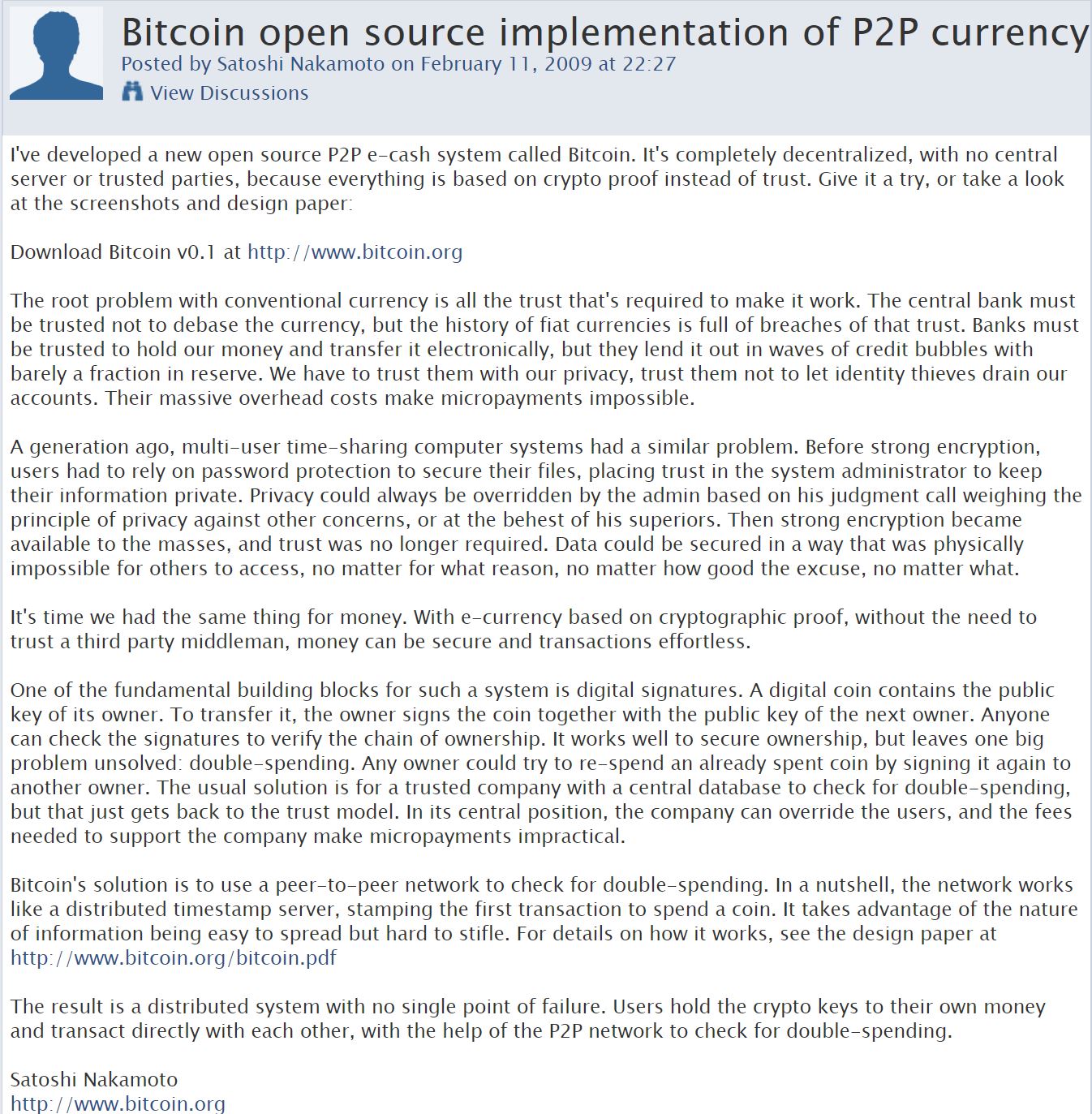 On Jun 17, 2010, Satoshi Nakamoto elaborated the design of Bitcoin to remove the need of trusted third parties in the Bitcointalk thread "Re: Transactions and Scripts: DUP HASH160 ... EQUALVERIFY CHECKSIG".
Original Thread: Re: Transactions and Scripts: DUP HASH160 ... EQUALVERIFY CHECKSIG
2010-06-17
The nature of Bitcoin is such that once version 0.1 was released, the core design was set in stone for the rest of its lifetime.  Because of that, I wanted to design it to support every possible transaction type I could think of.  The problem was, each thing required special support code and data fields whether it was used or not, and only covered one special case at a time.  It would have been an explosion of special cases.
The solution was script, which generalizes the problem so transacting parties can describe their transaction as a predicate that the node network evaluates.  The nodes only need to understand the transaction to the extent of evaluating whether the sender's conditions are met.
The script is actually a predicate.  It's just an equation that evaluates to true or false.  Predicate is a long and unfamiliar word so I called it script.
The receiver of a payment does a template match on the script.  Currently, receivers only accept two templates: direct payment and bitcoin address.  Future versions can add templates for more transaction types and nodes running that version or higher will be able to receive them.  All versions of nodes in the network can verify and process any new transactions into blocks, even though they may not know how to read them.
The design supports a tremendous variety of possible transaction types that I designed years ago.  Escrow transactions, bonded contracts, third party arbitration, multi-party signature, etc.  If Bitcoin catches on in a big way, these are things we'll want to explore in the future, but they all had to be designed at the beginning to make sure they would be possible later.
I don't believe a second, compatible implementation of Bitcoin will ever be a good idea.  So much of the design depends on all nodes getting exactly identical results in lockstep that a second implementation would be a menace to the network.  The MIT license is compatible with all other licenses and commercial uses, so there is no need to rewrite it from a licensing standpoint.