It’s nearly impossible to engage in any meaningful online discussion these days without bumping up against so-called “cancel culture.” There is a perception, which may or may not be real, that people, brands, and institutions that don’t live up to the internet’s prevailing social mores can be “canceled” or publicly shamed into silence. 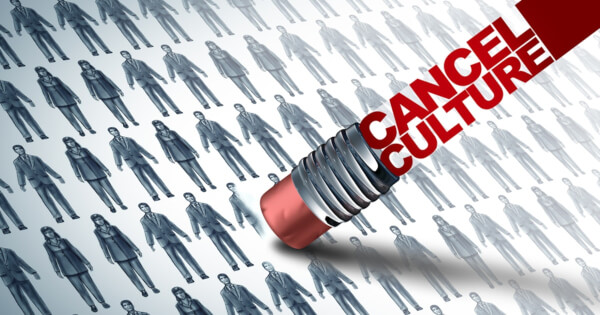 As with most hot-button cultural issues, the topic of cancel culture is far more complicated than our Twitter-obsessed society is willing to admit.

Before diving into my thoughts on the subject, we must first understand how we arrived at this unique moment in history.

For my American friends, the concept of freedom of speech is as integral to their being as any idea can be. For better or worse, the American definition has shaped much of the internet’s views on how we communicate. Whether this is due to the distributed nature of our online interactions or the fact that the major tech platforms were developed in the U.S. is neither here nor there.

The truth of the matter is that platforms like Twitter, Facebook, and countless others have given almost everyone a megaphone and imbued them with the belief that freedom of speech extends to their behaviors.

Of course, when the American Founders developed the Constitution and the Bill of Rights, they couldn’t imagine a world in which a single message, regardless of veracity, could be transmitted to billions of people instantaneously.

So we find ourselves in an interesting position. We have billions of people, connected despite different cultures and geographies, all grappling with the ability to share anything far and wide. Meanwhile, we have public figures and businesses operating on a global stage, subject to the whims of the crowd like never before. Finally, all of this is happening in an unregulated, chaotic free zone without central authority or even shared understanding.

There are multiple forces at play here. The first is the tech company itself, which can “de-platform” anyone who violates its terms of service. The second is the crowd itself, which exerts influence through what can only be described as a twenty-first century “mega boycott.”

As someone who has a foot in both the worlds of Western, liberal democracy and Chinese centralized leadership, I feel as though I have a unique perspective on the matter.

Tech companies like Twitter have, in my opinion, the right to regulate their platforms as they see fit. If they feel that former President Trump used their platform to sow the seeds of insurrection and violence, then they have the absolute right to kick him off for good.

Of course, this leads to accusations of censorship and circles back to cancel culture.

To those who complain of censorship, let’s keep things in perspective. In China, for example, censorship has a very different meaning. The worst-case scenario of being “canceled” in that part of the world entails a bit more than losing your Twitter account.

As with most things in life, everything comes down to common sense.

First, we must all conduct ourselves with dignity and honor and avoid pointless incendiary interactions.

Next, companies, public figures, and institutions must realize that there are consequences for their words and deeds. The Twitter mobs may come for them, calling for their heads, but ultimately, those individuals control how they choose to respond. If a company like Disney wants to fire an actor or actress for making controversial comments, that’s their decision. They’re merely making the most practical business decision.

Finally, we have to recognize that the tech platforms are independent organizations, and again they can choose how they want to respond to controversial figures. Yes, there is room for a double standard here, but as long as they operate in the context of a free and open society, the decision and power are theirs.

We must all work to encourage common sense and remain mindful of the environment in which we operate.