Since blockchains came into the limelight, critics have sprung up to downplay the importance of a blockchain-powered society. In these situations, blockchain evangelists resort to the ultimate argument that blockchain is decentralised and is, therefore, beneficial.

According to the broader blockchain community, decentralisation is the greatest feature of the technology. Sure, Bitcoin may be a store of value, but its real value lies in its decentralised nature.

Running on a decentralised system means Bitcoin is resistant to government censorship. Moreover, there are more participants in the network and multiple points of failure, making service failure and malicious attacks improbable.

Decentralisation is inextricably linked to the identity of the blockchain community. It’s the Holy Grail—an ideal every two and a half blockchains claim to uphold.

However, whether blockchain today is truly decentralised nowadays is up for debate. Much has changed since Satoshi vanished, and blockchain technology has gone from being a fringe technology to one of the hottest industries in the world. And, as anyone knows, the nature of technology often evolves as adoption grows.

Before we start comparing blockchains, it is important to understand the meaning of decentralisation. With how decentralisation gets thrown around so much in the wider blockchain community, you’d think a commonly accepted definition of the concept exists.

It turns out decentralisation means different things to different people. Someone might call Bitcoin “decentralised” because “no controls the development” of Bitcoin. However, with mining power—crucial to the decentralised blockchain networks—concentrated in a few hands, some would argue Bitcoin isn’t decentralised.

Conversely, Ethereum, with a very visible Vitalik Buterin having a huge say in the network’s development, may claim to be decentralised, given its planned switch to a Proof-of-Stake system which allegedly distributes validating power more evenly than Bitcoin.

What we can deduce from these arguments is decentralisation isn’t a state. Instead, it’s a spectrum. A blockchain network’s position on the spectrum is a culmination of different factors, some of which include:

Present-day blockchain networks vary in the aforementioned qualities, which invariably leads to variations in decentralisation. In most cases, the difference is because decentralisation is traded off for other benefits (like speed).

“Governments are good at cutting off the heads of centrally controlled networks like Napster, but pure P2P networks like Gnutella and Tor seem to be holding their own.” — Satoshi Nakamoto (circa 2008).

Why is Decentralisation Important?

Already, we have Satoshi telling us why decentralisation is central to blockchain’s usefulness: it preserves blockchain’s protection from external control, corporate players, and government. Think of it as the mythical Hydra: cut off one head, and three more grow in its place.

For now, blockchain technology hasn’t received that much attention from world governments (although that’s changing). But if governments decided to crack down on cryptocurrencies, DeFi platforms, and other innovations running on the blockchain, the system would be able to stave off such attacks. At least, that’s the theory.

Still, there are more benefits to decentralisation, including the following:

Centralised services have a single entity controlling access, leaving such platforms with a single point of failure. With just one access point to breach, malicious attacks on the system would be easier.

Blockchain technology utilises the peer-to-peer system, which Satoshi praises in his paper. A P2P network distributes computing power over different computers, with nobody controlling access to the network. To take over the network, attackers need to control a significant majority of computers (nodes in a blockchain), which is theoretically impossible.

When Facebook’s servers crashed, billions of people were cut off from accessing the platform. Conversely, a decentralised platform would rarely fail like that since the system relies on many components to work. Decentralised blockchain technology is designed to be robust, such that the system can continue to operate even if a part fails.

Satoshi Nakamato envisioned the Bitcoin blockchain as a democratic platform with free access to everyone. According to the original whitepaper, control of the blockchain was split across the board, with no group holding wielding dominant power.

This prevents certain actors from colluding to operate the system for their benefit. With Bitcoin and other public blockchains, any change to the system would require approval from other participants in the network.

As John Lennon said, “yeah, power to the people.”

How Decentralised are Blockchain Networks?

Decentralisation often brings up fierce debate because it’s difficult to evaluate. Each blockchain, even copycat versions, has a unique architecture, so finding a basis of comparison.

However, blockchains have several markers to indicate their level of decentralisation. This includes, as mentioned earlier: governance, hashrate or validator power, network size, and accessibility. Using these criteria, we can attempt an honest appraisal of the most popular blockchain networks:

Governance is how rules guiding the system are made and enforced. Moreover, governance is the process through which major decisions concerning the design and development of the blockchain are made and implemented.

In a decentralised system, governance is distributed evenly across the network—or, at least, a majority. That means one entity shouldn’t determine the future of a blockchain, lest it becomes a centralised system—an imposter among us.

To a larger extent, Bitcoin has a highly decentralised governance structure. With no figurehead, major decisions are left in the hands of the community of Bitcoin Core developers. That explains why supporters of SegWitX were left with no choice, but to fork the Bitcoin blockchain after their proposal to implement newer features (such as an increased block size) failed to garner support.

Ethereum is a different beast, with founder Vitalik Buterin, considered to be heavily involved in the network’s development. However, most signs suggest control of the network’s protocol is decentralised.

According to the Ethereum Foundation, several groups participate in governance, including holders of the blockchain’s native token ($ETH), users of applications (dApps) built on the Ethereum blockchain, application developers, node operators, miners/validators, and many more.

Other blockchains are less decentralised in this aspect. For example, the development of the Cardano and Polkadot blockchains is mostly managed by founder-led organisations: WEB3 Foundation for Polkadot and IOHK for Cardano. Solana, a blockchain noted for its fast speeds, is pretty much controlled by a small pool of developers.

So, Bitcoin and Ethereum pass the governance test. The rest? Not so much.

The size of a network is another excellent measure of decentralisation. The more participants you have in a network, the more decentralised you can expect it to be. However, it’s necessary to ensure that a few participants don’t control the majority of the network.

In Proof-of-Work blockchains like Bitcoin and Ethereum 1.0, hashrate is the best way to measure network size. The uninitiated Hashrate is total computational power used to mine and verify transactions on PoW networks.

A network’s hashrate shouldn’t be concentrated in a few hands,or a group of miners could easily take over control of the blockchain. Bitcoin and Ethereum 1.0 use PoW consensus mechanisms, so let’s evaluate the stats.

At first glance, a few entities controlling large chunks of network power may look alarming. But, it’s important to know mining pools are often collectives with thousands of members, not over-centralised entities. While much of Bitcoin mining is concentrated in China, the system survived the Chinese government’s crypto mining crackdown—evidence of Bitcoin’s truly decentralised nature.

Validating nodes on Ethereum are set to increase with the network’s switch to a Proof-of-Stake consensum mechanism. The “beacon chain” already counts nearly 290,000 validators in its ecosystem.

Instead, measuring decentralisation through network size in PoS blockchains is done by considering the following factors:

a. Number of stake pools and validators

b. Total supply of currency staked

c. Number of validators and stake pools controlled by founders as opposed to individuals or other entities

Polkadot currently has 297 validators and plans to cap it at 1,000 validators. Cardano has 3,140 validators (aka stake pools) responsible for finding and validating transactions.

Binance Smart Chain, which uses a Nominated Proof-of-Stake (NPoS) consensus mechanism, has just 21 validators, who have to be approved by Binance. Other new-generation blockchains, including EOS (21) and TRON (27) have low number of validators as well.

From these numbers, we can see the trend of centralisation inherent in these blockchain networks. Besides, given the high costs of becoming a validator, there are suspicions concerning the number run by the founding organisation.

When looking at a network’s decentralisation, the initial token supply is a big factor to consider. If a project distributed coins unequally, with some entities large portions of total coins in supply, you can bet it’s running a centralised system. An egalitarian distribution of tokens ensures no one can hold enough to control the system—especially in a PoS blockchain, where coins staked determine validator power.

Satoshi Nakamoto created Bitcoin and allowed people to mine from the get-go. However, newer projects have increasingly pre-mined tokens for themselves before opening up the system to the public.

According to the chart below, many new blockchains, including Solana, Avalanche, Flow, Celo, Blockstack, Near, and Binance, allocated around 40% of the ICO to insiders, i.e., company executives, VCs, and founders. That’s an awful lot of coins to put in a few hands, which shows how much decentralisation new kids on the block (pun intended) lack. 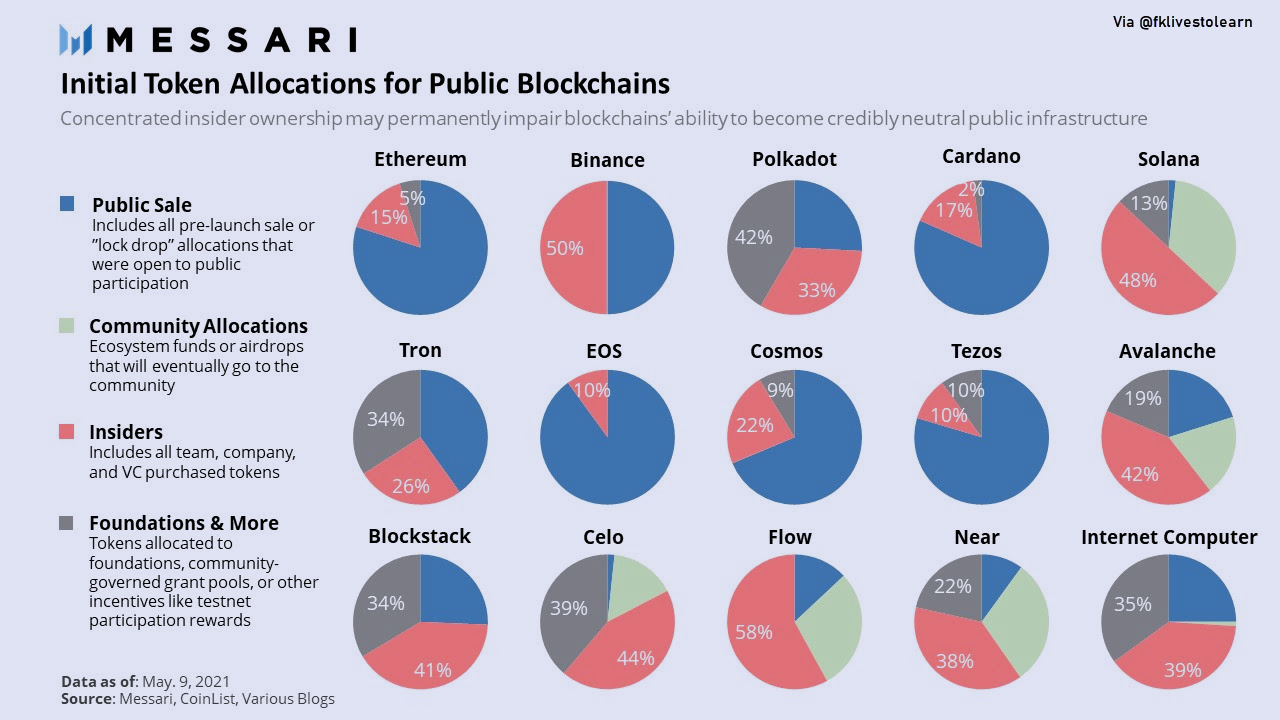 A true decentralised network relies on a P2P architecture with multiple nodes collectively processing transactions and securing the system against attacks. The more participants you have in a network, the greater the decentralisation.

However, a blockchain network must have low barriers to entry if it wants more participants. Thus, the accessibility of a network can show how decentralised it is.

Validating transactions on the Bitcoin network is easy if you have a server-grade PC and an Internet connection. However, mining blocks requires complex and often expensive devices, such as Application-specific Information Computers Systems (ASICs). However, individuals can join mining pools to contribute to the network.

Just like Bitcoin, validating transactions on the Ethereum network is possible with a home PC. Mining new blocks does cost more computing power, which may be out of the reach for average individuals.

Proof-of-Stake blockchains like Ethereum 2.0, Solana, and Cardano play by a different set of rules. Participants must stake an amount of the network’s cryptocurrency for the right to confirm new transactions.

Ethereum 2.0 requires validators to lock at least 32 ETH, which is about $88,640 per current market rate. This may seem high, but consider that some services allow participants to combine funds to create stake pools.

Besides, Ethereum’s threshold for entry is lower than many PoS blockchains.

Validators on the Polkadot network need at least 5,000 DOT staked (around $95,000). The system uses just 297 validators, so you can take a wild guess and estimate how many validating nodes are controlled by the Web3 foundation (founder of Polkadot).

Solana doesn’t set a limit to become a validator, but validators must pay up to 1 SOL in voting fees every day. Plus, figures for the required validator stake vary from 5,000 SOL to 50,000 SOL. With the already expensive hardware requirements, attaining validator status on Solana doesn’t look feasible for most people.

Binance Smart Chain has even stricter requirements: validators must stake a minimum of 10,000 BNB (around $3.7 million at current prices) and pass an application process. Not so decentralised, eh?

With so many variables involved, decentralisation may be one of the hardest metrics to measure in the blockchain. However, the analysis provided paints with a pretty accurate picture of the decentralisation level available in most popular blockchain networks today.

Except for a few, the large majority of newer blockchain networks are far from being decentralised. Some may argue that these platforms sacrifice decentralisation for higher scalability and added functionality. However, the million-dollar question is:

What use is a blockchain if it’s not decentralised and secure?