Mango Markets decentralised exchange (DEX) based on the Solana network announced Wednesday the company raised around $70 million through its MNGO tokens sale. 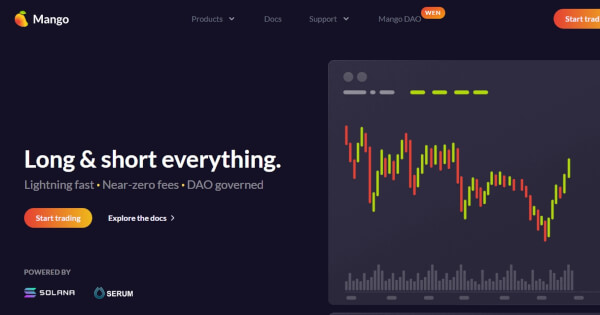 This token sale is one of the largest token sales on the Solana blockchain in recent months.  During the token sale period that has been listed on the exchange, a total of more than $500 million USDC has been invested in it to compete for token share.

In the end, as much as $70,462,383 was locked in a few minutes-this value far exceeds that of most decentralised protocols that raised funds in the seed round, which ranged from approximately $1 million to $15 million.

Mango Markets provides a decentralised trading platform for cryptocurrency spot markets, perpetual contracts, and lending transactions. Cryptocurrency investors have regarded the Solana blockchain as a strong competitor of the Ethereum network due to its high liquidity and low gas fees.

Solana was founded in 2017 as a completely open-source public blockchain designed to provide decentralised finance (DeFi) solutions in a scalable manner. Solana has raised a total of $335.8 million in funding over six rounds. Their latest funding valued at $314 million was raised on Jun 9, 2021, from an Initial Coin Offering round led by Andreessen Horowitz, Polychain.

In addition, as reported by Blockchain.News on June 4, the Solana Foundation cooperated with ROK Capital, a large-scale blockchain accelerator in South Korea, to jointly launch a $20 million fund to expand Solana's blockchain ecosystem in South Korea.