Liquid Network: The Platform for the Fastest Bitcoin Transactions?


Samson Mow is an entrepreneur and marketing strategist who is currently serving as the Chief Strategy Officer at Blockstream. Samson Mow is known as a Bitcoin expert and he is often invited to speak on panels and give presentations at blockchain events and conferences. He rose to some prominence in the community from his famous bitcoin scaling debate with Roger Ver—AKA Bitcoin Jesus, at Deconomy 2018.

In Part 2 of the interview, Samson unmasked the power behind Liquid Network, how Liquid transactions work and c-lightning on Liquid. He also shared the latest initiatives of Blockstream and his personal take of Bitcoin in 2020.

Liquid is a Sidechain Not a State Channel

State Channels and Sidechains are two terms in the blockchain community that are often used interchangeably, thus causing mass confusion. Blockstream’s Liquid is an example of a sidechain—a separate blockchain that is attached to its parent blockchain or main chain.

State Channels are a very broad and simple way to think about blockchain interactions which could occur on the blockchain but are instead conducted off of the blockchain. Moving these interactions off the chain without requiring different trust could lead to significant improvements in cost and speed. State Channels are touted as a solution that could be critical to scaling blockchain technologies—a function Liquid is also providing for Blockstream’s users.

Mow explained, “State Channels basically use UTXOs (an output of a blockchain transaction that has not been spent) to move assets off the blockchain. Liquid is actually more like a blockchain; it’s a federated blockchain that is essentially running a multisig wallet. So when you move funds into Liquid, you are actually locking them up on the main chain and then unlocking them in Liquid, which is why Liquid Bitcoins have a one to one relationship with Bitcoin.”

One of Liquid’s promoted features is enhanced privacy and its support for confidential transactions. Mow explained, “essentially, you cannot see how much is being sent to someone else. It's shielded and that helps prevent things like front running. So if you're sending L-BTC to another exchange, people are unable to monitor the Liquid blockchain and say—okay, you're sending a hundred thousand coins, I'm going to go and trade against you there.” He added, “there's a lot of benefit for traders and we're positioning Liquid as a network aimed at traders—moving funds from exchange to exchange to take advantage of arbitrage or just to move their coins or collect their coins in one place to trade. Those features are good for a trader. When it comes down to it, you would use Liquid because it is the fastest way to move Bitcoin.”

Recently the c-Lightning team announced experimental support for the Liquid Network in c-Lightning. This allows users to take advantage of early Lightning support for L-BTC payments and the added features of Liquid’s transaction confidentiality.

“Because Liquid is built off of Elements—our blockchain building platform—it's a fork of the Bitcoin chain. So anything that works with Bitcoin can work with Liquid and by extension Elements.” Said Mow. “c-Lightning is our own lightning implementation and to get it working with Liquid assets, we are going to have to make some changes. Dealing with Lightning itself is easy, because it is just another form of Bitcoin, but if you're dealing with a Liquid asset, you need to do two things—handle the opening and closing channels for L-BTC and for the asset you are transacting in the channel. So we still have some R&D to do but potentially we could have that running sometime next year.”

Mow shared that Blockstream is currently developing a lot of tools such as Miniscript, which is an improved version of Bitcoin script. He said, “we have someone working on smart contracts in Bitcoin called Simplicity—the smart contracting language which will probably be available in Liquid first, then maybe if people want it, it'll be available in Bitcoin.”

Another interesting project is Blockstream Mining, which the company announced a few months ago. Mow said, “we are making a play for Bitcoin infrastructure at the mining level—we have 300 megawatts between our two facilities in Canada and the US, and we're rapidly expanding.”

It is worth noting that Blockstream mining is a hosting provider rather than an ASIC manufacturer, which Fidelity and Reid Hoffman (co-founder of LinkedIn) are some of the notable customers. “We are building a facility where you can host your machines and we can help customers to procure ASIC mining machines too. We are not competing with ASIC manufacturers now.” Mow added.

As we continued to discuss the proposed solutions to Bitcoin scalability, Mow commented on where so many developers have gone wrong with their conception of the problem. He said, “scalability is multifaceted and a lot of people originally tried to pigeonhole scalability as a need for bigger blocks, but that's a dead end. You can't just keep making the blocks bigger because the network has to keep in sync. We are always making improvements at Layer 1 or the Bitcoin base layer, but you also need the second layer—in our case Lightning—to get Bitcoin to everyone in the world.”

Detailing the scalability power of Lightning, Mow said, “we've done some calculations and currently one channel can process a theoretical maximum of 500 transactions a second. So, if you multiply that out by the number of channels in the network, it's like 18 million transactions a second. So that is the only way that you can scale a blockchain to a planetary level.” He concluded, “At the base layer, there are always improvements coming out and there’ve been optimizations happening for the past several years—the Bitcoin blockchain now is actually much faster than say five or six years ago.”

The Promise of Bitcoin is Coming

The launch of the Lightning Network and second layer solutions is encouraging for the Bitcoin settlement system, but will Bitcoin ever fulfill its promise and become a true payments system with global adoption? Mow said, “Yeah, definitely. I mean, we're seeing rapid growth in Bitcoin adoption already. And with Lightning, it's becoming more and more relevant and prevalent everywhere we go. I think all it will take is for some point of sale terminal operator to integrate Lightning and then you essentially can have Bitcoin payments everywhere.”

Mow highlighted that we are already seeing to occur. He concluded, “There are a few points of sales terminals that have integrated BTC payments. Bakkt, the NYSE backed BTC custody house is currently developing a payment system with Starbucks. So it is all coming, it’s just a matter of time but I think in the next five years, we'll definitely see mass availability of Lightning payments.” 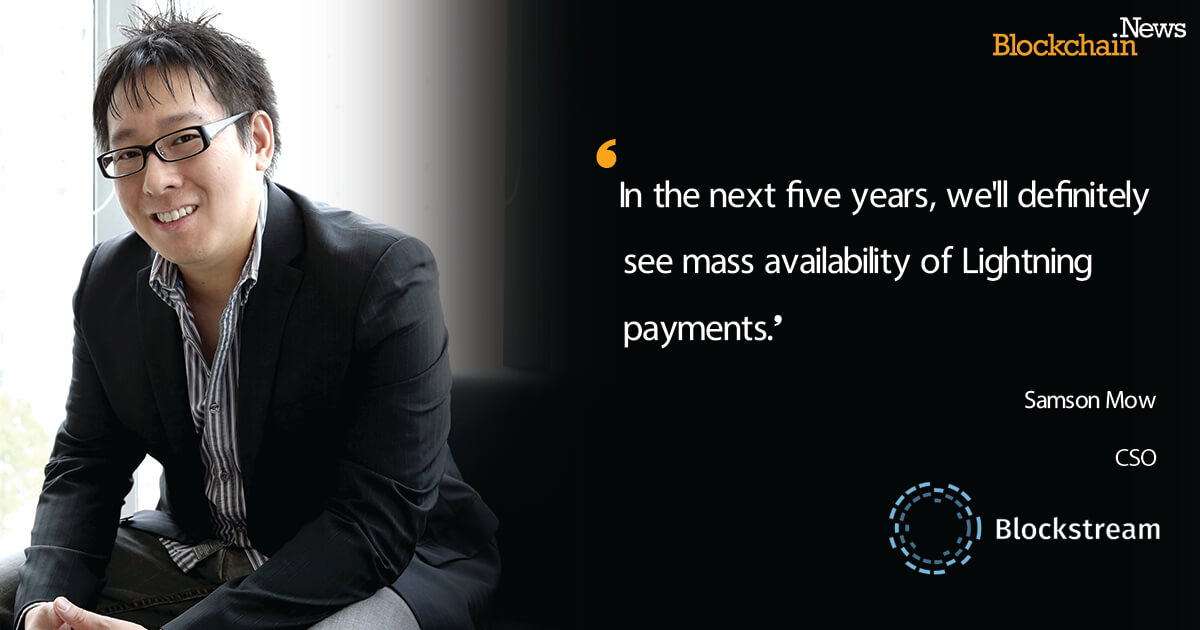