G7 Set to Release the Guidelines for the Creation of CBDCs


The Group of Seven (G7) industrialized nations are looking forward to accepting the proposals of a draft which seeks to enshrine some set of standards in the creation and issuance of Central Bank Digital Currencies (CBDCs). 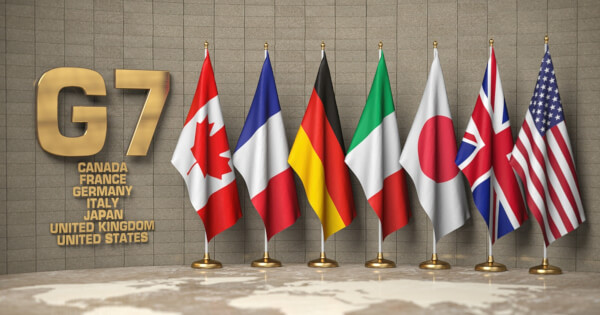 According to the Japan Times, neither of the members of the G7 including the US, Italy, Japan, Canada, Britain, France, and Germany have confirmed they will be implementing a CBDC, and the draft contains as many as 13 recommendations.

The G7, according to the report understands that the decision to develop a CBDC is a sovereign matter, however, it noted that “by setting out a common set of principles, and underscoring the fundamental importance of shared values such as transparency, rule of law and sound economic governance, these principles can guide and inform exploration of retail CBDC in the G-7 and beyond.”

Amongst the issues, the draft proposal will seek to address the development of national and regulatory policies for the proposed digital money. Accountability standards and privacy must also be important factors that should be considered by countries looking to implement a CBDC.

The G7 will also aim at pushing countries with CBDC agenda to consider robust safeguards that can protect currency substitution with other countries.

“Where overseas access to a jurisdiction’s CBDC could leave other countries vulnerable to currency substitution or other spillovers, collaborative work to design and implement safeguards, particularly through relevant international organizations, can help mitigate negative effects,” it said.

As reported by Blockchain.News on October 6, the International Monetary Fund (IMF) president Kristalina Georgieva has recently said that about 110 countries have CBDC development at some stage.

While the G7 is a fraction of these numbers, they notably have such influence that can make the difference is passed off by the members when the Finance Chiefs of this body meet on Wednesday.

Above all, the draft recommendation will also seek to foster currency interoperability, albeit, with standards that can help prevent financial frauds, and the risks of evading sanctions.