New Money Theory Research: Blockchain to Usher in the New Age of Monetary and Financial Freedom

New Money Theory Research: Blockchain to Usher in the New Age of Monetary and Financial Freedom 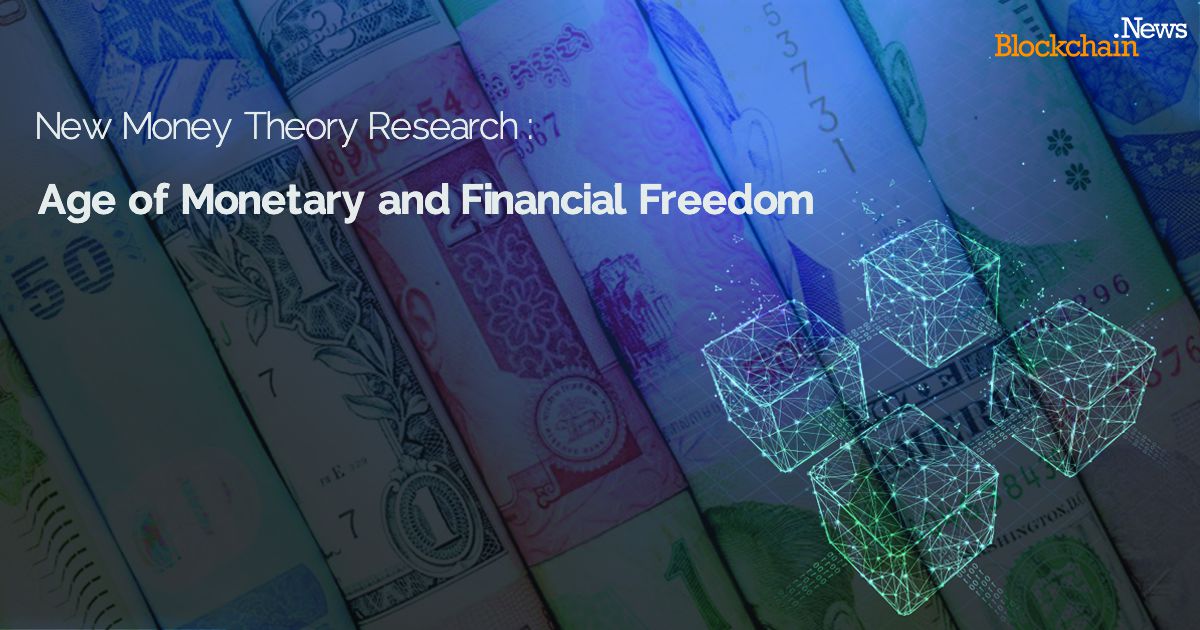 Throughout history, humans have progressed through both a reliance on institutions and in many cases by rebelling against institutions that no longer serve them. In order to improve the overall social efficiency of our civilization, processes of social division of labor emerged where individuals would transfer their rights to an institution like the government or a bank which acts as credit agency. Governments and banks are indeed the most typical credit agencies in existence. It may not be that obvious, but credit agencies are actually everywhere and act as intermediaries for most basic transactions in human life. There are few deals that people can make without a third party involved.

When people initiate a property purchase transaction, they do not simply exchange money with the current owner for the deed of that property. They are obligated through traditional systems to put trust into third parties or intermediaries such as mortgage lenders, real estate agents, brokers/realtors, home inspectors, home appraisers, insurance agents etc. In our current economic ecosystem, the owner and buyer will find it almost impossible to make a property deal without the involvement of a third party.

Here is another example. Let’s say you have 10 million U.S. dollars. Unless you have the amount in physical cash, you do not actually hold the money; instead, what you do have is access to a bank account that records your ownership of the sum. Without a second thought, you put all your trust into the bank that creates and maintains that record of your finances. The reality is that the reliability, security and accounting of banking institutions is a system that people simply take for granted in this modern era—but is it the best way? Well, let’s go deeper, what may surprise some is that the actual value of our money itself is also completely reliant on the trust people have for their Central Bank—the embodiment of their nation’s credit. Since the collapse of the Bretton Woods system, a monetary standard that created money backed by gold reserves—our fiat currencies are now issued based on national credit and by the central banks. Central banking practices, however, have a demonstrable history of devaluing our currencies.

It only takes a conscientious look back at the history of currency issuance through national credit to deduce that this contemporary system is extremely unreliable. While most people today still appear to view the U.S. as the most financially reliable country in the world, the reality is that we have seen the U.S. national credit default on several occasions. The collapse of Bretton Woods system was, in fact, the result of a U.S. national default. As Bitcoin founder Satoshi once said: “The central bank must be trusted not to debase the currency, but the history of fiat currencies is full of breaches of that trust. Banks must be trusted to hold our money and transfer it electronically, but they lend it out in waves of credit bubbles with barely a fraction in reserve.”

If we could reduce our reliance on credit agencies to a bare minimum, we can cut out significant transaction costs and more importantly—lower the risks of institutional power being abused or expanded. Credit agencies by their nature abuse and expand their power, usually under the guise of serving the people, which in extreme cases could lead to dictatorship and monopoly. Wherever there is a dependence, there is the possibility of being enslaved. Human history is largely a history of fighting against imposed “serfdom”.

One of the greatest achievements in the history of humanity, was the introduction of constitutions for the purpose of restricting government’s power and protecting private ownership—basic laws that apply to all people and served to abolish class systems. However, there is still one more hidden, untamed and indirect powers exist that are driving us to economic serfdom—the U.S. dollar and the Federal Reserve that creates its monetary policies.

The Vietnam war proved costly for the U.S., requiring the nation to spend vast resources to fund its military operations. During this period, the excessive printing of U.S. dollars to pay for the expense pushed up the dollar’s commodity price but could not affect the stable price level of its pegged gold benchmark. The continuous inflation of U.S. dollars resulted in an accelerated pileup of at least USD 80 billion Eurodollars which European wanted to redeem their USD for gold in late 1960s.

The collapse of Bretton Woods was a result of gradual loss of confidence in U.S. dollar. In May 1971, West Germany left the Bretton Wood system and Switzerland redeemed USD 50 million for gold. In early August 1971, France sent a warship to New York Harbor and redeemed USD 191 million from the New York Federal Reserve Bank. On August 11, the British ambassador requested to redeem USD 3 billion for gold[1]. These gold withdrawals have placed mounting pressure on U.S.’s long term gold reserves. In an attempt to protect the remaining U.S. gold reserves, President Nixon removed the dollar from the gold standard. By dissolving the Bretton Woods agreement, Nixon and his globalist accomplice, Henry Kissinger, knew global demand for the dollar would decline. Since then, the U.S. gold reserve kept unchanged.

After the Yom Kippur war, the Saudis and Americans struck a deal—the U.S. would protect the Saudi oilfields and restrain any threats from Israel and in return the Saudis agreed to price all of their oil sales in U.S. dollars only and to refuse all other currencies. This led to the rise of Petrodollar [2].

By 1975, every single oil-producing nation of the OPEC had agreed to price their oil in dollars and to hold their surplus oil proceeds in U.S. government debt securities in exchange for the generous offers made by the U.S. The world’s subsequent reliance on oil further galvanized the U.S. dollar as the de facto world currency to facilitate trade and commerce meanwhile the Federal Reserve continues to monopolize U.S. monetary policies without restriction.

As Lord Acton famously expressed to Bishop Mandell Creighton in 1887—absolute power corrupts absolutely—and the U.S. dollar has unfortunately not been the exception to this rule. Unlike the gold standard, currency created without consensus and without support, will fall prey to the law of the jungle which holds that the habitat is destined to be ruled by the apex species. While the U.S. dollar is clearly no longer at the apex, the currency has been manipulated through monetary policies in order to maintain its current dominant international status. These policies have unfortunately been created to serve the sole interests of the currency issuer, even when it undermines the economic wellbeing of other countries or regions and their people—indirectly leading the world into the soft dictatorship of the U.S. dollar.

If the U.S. dollar represents our monetary enslavement then blockchain-based cryptocurrency paves the way to monetary freedom in some sense.

The Essential Advantage of Blockchain

Blockchains incorporate several important features such as immutability, encryption and distributed storage, which combined makes secure peer-to-peer transactions possible and in turn has created the means to end human dependence on credit and thus credit intermediaries. Due to these features, blockchain has been referred to as ‘the Trust Machine’ and is forecasted to transfer the trust from agencies and institutions which are enforced by law to machine-based networks guaranteed by technology and mathematics.

Let’s take a look at the profound potential impact blockchain has on our monetary and financial system. We previously introduced three key aspects of money: money forms, money issuance standards, and the flow of money.[3] With blockchain, we are leveraging a brand-new system of architecture for the flow of money. In addition, blockchain makes new forms of money available that could bring us to realize the notion of “absolutely private property” for the first time in human history—where ownership of an asset on a blockchain is guaranteed by technology and mathematics. Bitcoin, for example, the original cryptocurrency, of which the ownership depends on a private encrypted key. Without the correct private key, there is no way to move bitcoins around, even if it is ordered by law on pain of enforcement. As for the money issuance standard, blockchain has even more to offer.

We propose our principle for the money issuance standard: extract the most important parameter(s) from the driving forces behind human society and future technological developments; then use these factor(s) as inputs of the money issuance rule. In this way, the problem of money issuance is reduced to contributions to factor(s) that make the world better.

The Profound Impact of the New Money Issuance Standard

The era of “machine-orientation” is the beginning of measuring the value of people and machines with a unified scale, and it is also the beginning of the blurring of the boundaries between people and machines in terms of social contribution. Different from the traditional human labor based social value system, the new standard will lead us to rethink and reconstruct our entire social value system. The emergence of bitcoin and blockchain thus marked the beginning of the transition from a carbon-based civilization to a silicon-based civilization. Although we can map real world assets to blockchain, we still need a currency to measure the value of the blockchain system itself.

For future value networks that are blockchain based, we need to answer some basic questions regarding value: What is value? How is value created and where makes something valuable? Currency is the most direct means of value quantification and is the most basic form for the evaluation value of a blockchain network. The money issuance standard on blockchain will determine how to create money, in turn it will determine its value, which consequently will re-define all social values.

[2] FXCM.com, What is the Petrodollar?