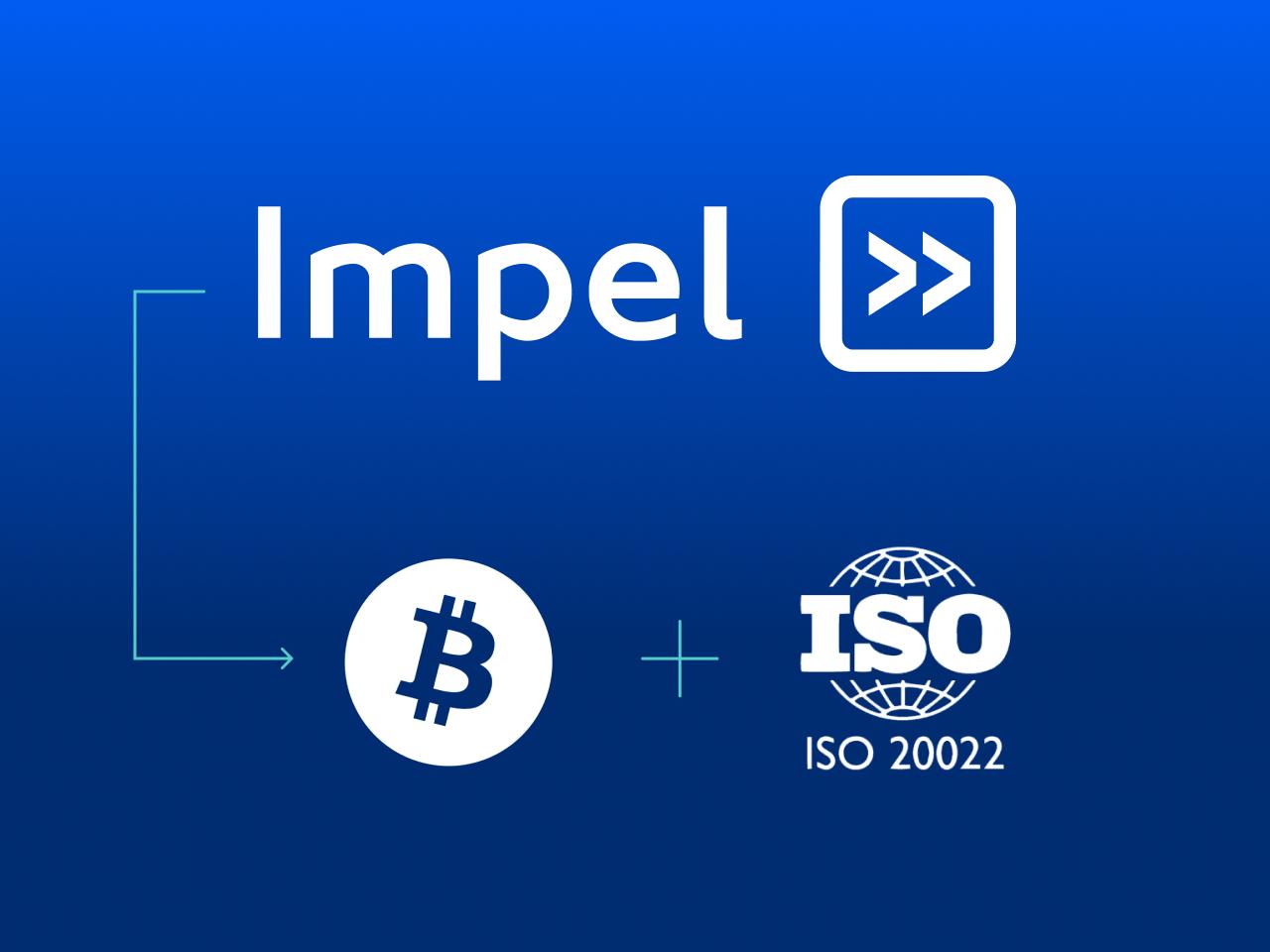 Impel is pleased to announce today that bitcoin (BTC) has been added to its ISO 20022 financial messaging API as optional collateral for making payments. This addition enables BTC to be used in the instant settlement process for traditional banking services and other organizations that utilize the new ISO 20022 messaging standard. It offers the opportunity for improved customer experience, increased security, and significant operating cost savings.

The technology industry’s future lies in the broad range of techniques that allow different blockchains to communicate with each other. The transfer of digital assets and data between one blockchain to another is referred to as cross-chain compatibility. Interoperable bridges play a crucial role in providing these robust options for desired digital assets to be used for payment.

Through its collaboration with DIMO and Wanchain, Impel’s userbase can move BTC from its native network to the XDC Network as a wrapped digital asset called “XBTC,” referred to as an XRC-20 token. Both DIMO and Wanchain aim to make the blockchain ecosystem completely interoperable, one bridge at a time. “We see this bridge between the Bitcoin and XDC Networks as an important step in creating real-world interoperability in the blockchain ecosystem,” said Bhavesh Thakkar, Co-Founder, and CEO at DIMO.

Wanchain’s WanBridge uses an advanced version of the Lock-Mint-Burn-Unlock method to transfer digital assets between blockchains. No intermediaries or relay networks are involved, as assets are transferred directly from the source chain to the destination chain. For example, when moving BTC to the XDC Network, it is locked on the Bitcoin Network by the bridge’s nodes before the XBTC is minted on the XDC Network. The $XBTC can then be used as collateral for ISO 20022 payments.

The bridge, operated by a group of permissionless, decentralized nodes, is required to stake sufficient funds and is elected monthly. Collectively, the nodes use a combination of Secure Multipart Computation (sMPC) and Shamir’s Secret Sharing (SSS) to generate signatures, securing these cross-chain assets. This is an approach far more secure than the current multisig standard. Additionally, no single node or entity will have direct access to these wrapped assets, which are secured by a shared pool of digital assets to overcollateralize the cross-chain assets.

“Impel offers no-brainer solutions via an API for any organization in the world that needs to use the ISO 20022 compliant financial messaging standard,” said Troy S. Wood, CEO and Founder of Impel. “Plus, we sweeten the deal with the option of adding collateral to the message’s payload for instant settlement.”

Impel’s ISO 20022 financial messaging is a standard that is already widely adopted in more than 70 countries, and it is one the United States aims to implement by 2025. Impel’s platform offers optional instant settlement using $XDC, the native coin on the XDC Network, XRC-20 tokens, such as $XBTC, and the wrapped stable coin USDC ($XUSDC).

Impel’s service offerings are built and operate on the XDC Network, a Layer 1 blockchain protocol that is a highly optimized, bespoke fork of Ethereum. The network offers significant benefits, such as near-zero gas fees, and it reaches consensus through its delegated proof-of-stake (XDPoS) mechanism, thus using virtually no energy and allowing for fast processing at two second transaction times and over 2,000 transactions per second. The XDC Network provides cross-chain interoperability with its smart contracts. As an Ethereum Virtual Machine (EVM) compatible blockchain, project migrations to the network are seamless.

Security is important at Impel, and financial transactions are routed through a highly secure API, utilizing a Layer 2 solution that prevents data exposure to unauthorized parties. It was developed by a team with decades of information technology experience in providing secure technology infrastructure for banks and fintechs.

Impel will not charge implementation, annual membership, or per-usage fees for its financial messaging service. The only cost for banks and financial institutions is the XDC Network’s near-zero gas fee to send messages and payments, which is only a fraction of a cent ($0.00001) or less per transaction. Notably, financial transactions can be rolled up into just one message, meaning that multiple messages can be sent in one transaction allowing for customization that meets the demands and desires of the involved parties.

Impel offers a self-paced ISO 20022 financial messaging demo that allows anyone to create and send transaction requests over the XDC Network’s mainnet, with the option to add collateral, such as $XDC. $XBTC, or $XUSDC to the message’s payload. The demo is available on Impel’s website: https://impel.global.

About ImpelImpel is a fintech innovator that uses blockchain technology to deliver financial messaging, instant settlement, and a bridge to the R3 Corda platform to future-facing banks and fintechs. Created to provide a cost-effective alternative to legacy solutions like SWIFT and SEPA, Impel’s service offerings run on the XDC Network using a decentralized, enterprise-ready hybrid blockchain to securely and quickly send financial messages and payments using $XDC or XRC-20 tokens. Leveraging outstanding security, Impel offers real-time payment settlement, instead of the current 2+ day standard via the central banking system. Impel’s financial messaging meets the ISO 20022 standard, with no cost other than the XDC Network’s near-zero gas fee to send messages or payments. Utilizing a bridge to the R3 Corda platform, $XDC or XRC-20 tokens move to and from the public Corda Network and can be used as a settlement vehicle inside the Corda ecosystem. Financial institutions can use Impel as a catalyst to strategically transform their businesses and unlock value-added opportunities enabled by the new standard. Learn more at https://impel.global.