While Amazon and Microsoft launched the blockchain-as-a-service (BaaS) platform in 1H 2019, Hedera Hashgraph collaborated with IBM to launch a consensus as-a-service model. Is this the next upcoming tech trend for giants to follow? 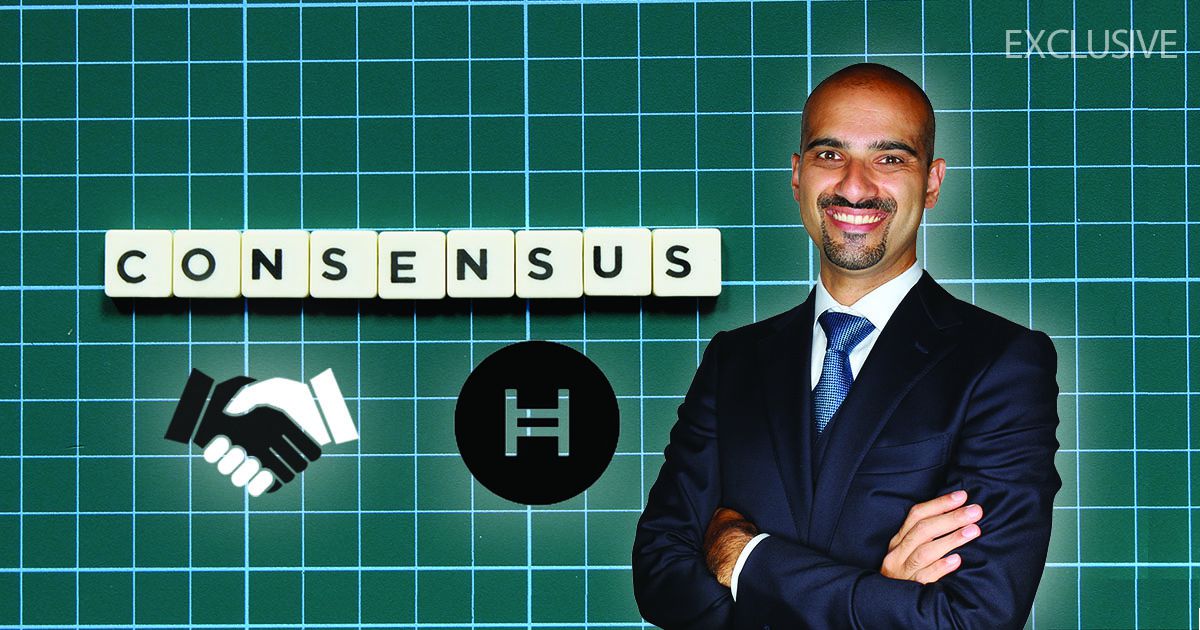 Readers are very interested in the collaboration between Hedera Hashgraph with IBM on the consensus as a service model. Can you talk more on this model and how does will transform the development of blockchain?

Hedera Hashgraph joined Hyperledger. We co-authored a whitepaper with IBM and released it in June. We've announced a fourth service on the Hedera Hashgraph platform. We had three services before, one was a cryptocurrency service supporting micro-payments. The other was a smart contract using the solidity coding language. Then the third one was file service.

We announced the fourth service called consensus as a service.

Essentially, we're providing solution for centralized applications or applications built on private ledgers to have the benefit of decentralization.

Hashgraph consensus algorithm is a patented algorithm. Dr. Leemon Baird invented the Hashgraph algorithm in 2015. A lot of people asked us why our platform isn't open-sourced? Because we think stability is very important for the market. Stability means that we think the public platforms should not be allowed to fork. That's because we're an enterprise-grade platform.

If a company spends millions of dollars building a decentralized application, then we want that company to not be afraid of the platform itself forks. For example, if you have real estate being tokenized on the public platform and the public platform itself forks, then we don't know whether the value should be doubled? Is it on one platform or both platforms? It causes a lot of instability. One way that we're going to disallow forking is through our legal means, which is the patent of the Hashgraph algorithm.

Hedera Hashgraph began phase two of its community testing on the micro-payment. When would you expect the micro-payment will become a reality and which industry would benefit the most from this?

Micro-payment is one of the value propositions of Hedera, meaning being able to transfer less than a cent of value at hundreds of thousands of transactions per second (TPS) with finality. Up until now, traditional banking industries are not able to do that, because it costs way more to send it. You can’t send a cent in Bitcoin or Ethereum because of gas costs and miners.

Hashgraph allows microtransactions. The biggest use case in micro-transactions is definitely e-Commerce. All the transactions on the internet today are the most important use case. For example, you listen to one second of music, you pay 0.1 cents. For any IoT applications, you consume a little bit of data. For that data, you provide a little bit of value. Facebook came up with this Libra token. Presumably, they will start to pay people to watch their ads using the Libra token. That's another way the micro-transactions can disseminate the internet. Anything of value whether it's small pieces of data, two seconds of music, personal information, or putting a value on your identity, you can use microtransactions.

How Hedera Hashgraph will differentiate itself from the existing competitors in public blockchain like Conflux Chain, Algorand, and DFINITY?

The biggest difference between Hedera Hashgraph and everybody else is our split governance model. We have permissioned governance that is provided by the most trusted companies in the world and term-limited. We're trying to build an enterprise-grade platform that is governed by experts. Yet we provide open consensus at the same time. You have the best of both worlds, the best of permissioned networks and permissionless networks. This is something that we believe no other platform has.

On top of that, we have the Hashgraph consensus algorithm. Now Hashgraph is tech-wise different to any other algorithm by miles, with hundreds of thousands of TPS, latency is three to seven seconds with finality. In terms of security, we have a feature called asynchronous Byzantine Fault Tolerance (aBFT). Facebook is BFT so they're not aBFT.

What’s the difference between BFT and aBFT?

Because of Libra, now people know what the word BFT is. It basically means that you can reach consensus even when they're up to one-third malicious nodes. But BFT has vulnerabilities such as distributed denial-of-service (DDoS) attacks. aBFT provides strong assurances against certain classes of attacks, like DDoS attacks. Because each node comes to consensus independently of other nodes. You don't necessarily need to sync. to come to a consensus, and that's the difference between BFT and aBFT.

First, you had Bitcoin. People were like this is fantastic, we can transfer value. The second generation is blockchain which facilitates value transfer. People started to build a lot of stuff using blockchain as the underlying consensus algorithm.

The third generation is smart contracts. When Ethereum came out, people started to build smart contracts on it, programs that automatically run. But you still had the problem of not being able to order transactions in a completely decentralized and fairway. You still had the problem of not being able to create markets. Because a market is essentially where two people transact scarce resources. For example, in a stock market, it's very important to know which person bought which asset first. You need to order the transactions and auctions are the same. There are many use cases that are not possible to build on existing blockchain platforms. Because there is no fair ordering, and up until third-generation technologies. We call Hedera Hashgraph the fourth generation DLT because it provides the fair ordering capability that allows markets to be built upon the platform.