Understanding the Market Structure of Oil and its Correlation with Bitcoin 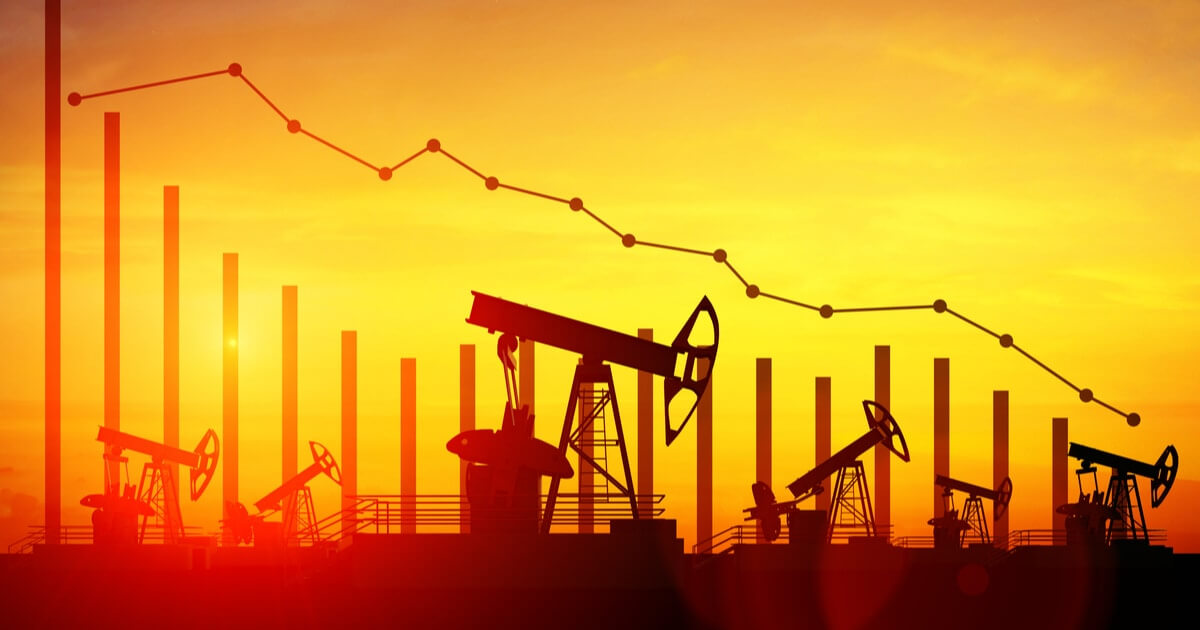 Before understanding the market structure of the oil, we need to understand that the oil market is a highly manipulated market due to the personal and monetary interests of various stakeholders. Understanding human conflicts, geopolitics, and principles of extraction, storage, and demand are the prerequisites of understanding how the oil market works.

2004-2008: The demand for crude oil increased after a sustained increase in demand from developing countries. This initiated a parabolic movement of oil's price as the demand outstripped the supply. Further, the OPEC nations were not interested in upgrading their extraction and storage facilities in order to bring the price of oil to an equilibrium.

2008-2009: The price of oil crashed due to a worldwide recession which reduced the demand for oil drastically and forced OPEC nations to take corrective measures.

2010-2011: The price of oil started increasing from 2010 after the Arab spring which increased political instability and caused fear in markets as the majority of the world's oil reserves were at high risk including Libya, Syria, Iran, Iraq, Egypt, etc. Further, the economic recovery and increase in demand from India and China for oil increase the price of the commodity.

2011-2012: The OPEC nations came to an agreement to extract more oil thereby increasing the supply in order to supplement the world demand and remove the fears of conflict that had spiraled out of control causing fear in the markets.

2014-2015: The USA started the extraction of shale reserves which reduced the price of oil significantly, pushing Venezuela into an economic meltdown coupled with hyperinflation and sanctions. Further, the OPEC started a price war by letting the price of oil fall hoping that the decline in price would make shale reserves extraction unprofitable leading US shale producers to shut down.

2016-2018: The OPEC agrees to cut its production output in a bid to prop up the price. Various OPEC nations were suffering a serious and dangerous downturn with high costs of extractions as compared to US counterparts, due to which they agreed to decrease the supply in order to reach a better equilibrium price.

2018-2019: USA and EU nations imposed sanctions on Iran thereby cutting off its exports and the demand for oil on the international market. Reducing and weakening the demand for oil from countries like India, China, Japan, Germany, etc.

2020-Present: The price of oil started collapsing from the month of January as international flights started to shutdown. With the aviation and traveling industry under restrictions the demand for oil reduced significantly. As the spread of the virus accelerated and nations all around the world went into lockdown with the suspension of domestic travel, the demand for oil saw a sharp decline, and storage facilities around the world found it difficult to store oil with no buyers in the market. 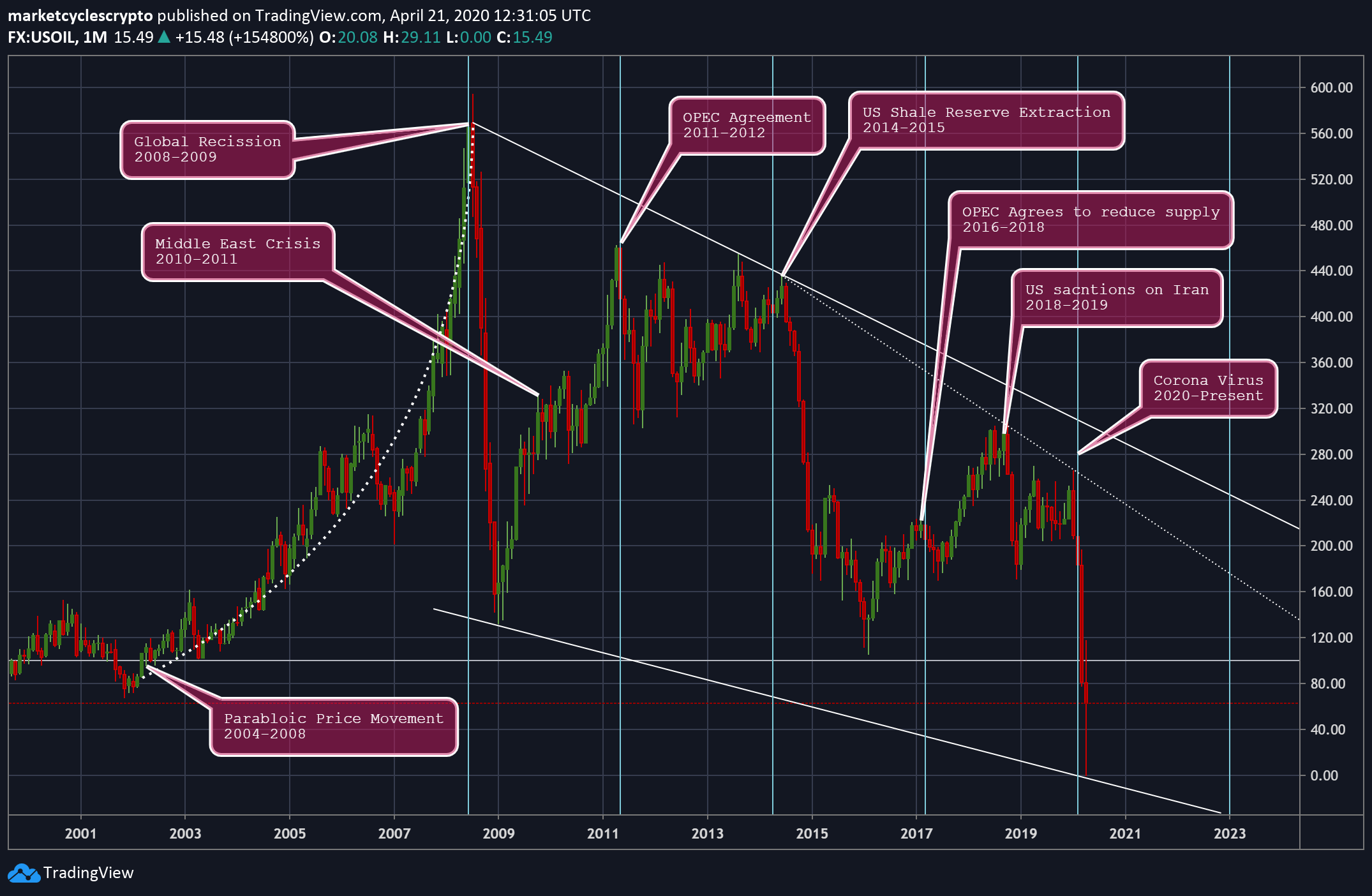 What led to the oil price crash?

1. The increase in inventory at the rate of 6-7 million barrels per week.

2. Cushing hub, where a majority of oil is stored saw its facilities completely filled.

3. Traders who were not able to take the delivery sold it on for the available prices.

4. The fall in price and the fear of May futures expiring on Tuesday ie, April 21 intensified the selling of oil.

5. The drop in price triggered mass liquidations and margin calls on various positions held by financial institutions, traders, etc, driving the price down even more.

6. Liquidation of positions also removes liquidity from the market spreads thereby accelerating the crash with poor liquidity on the books. 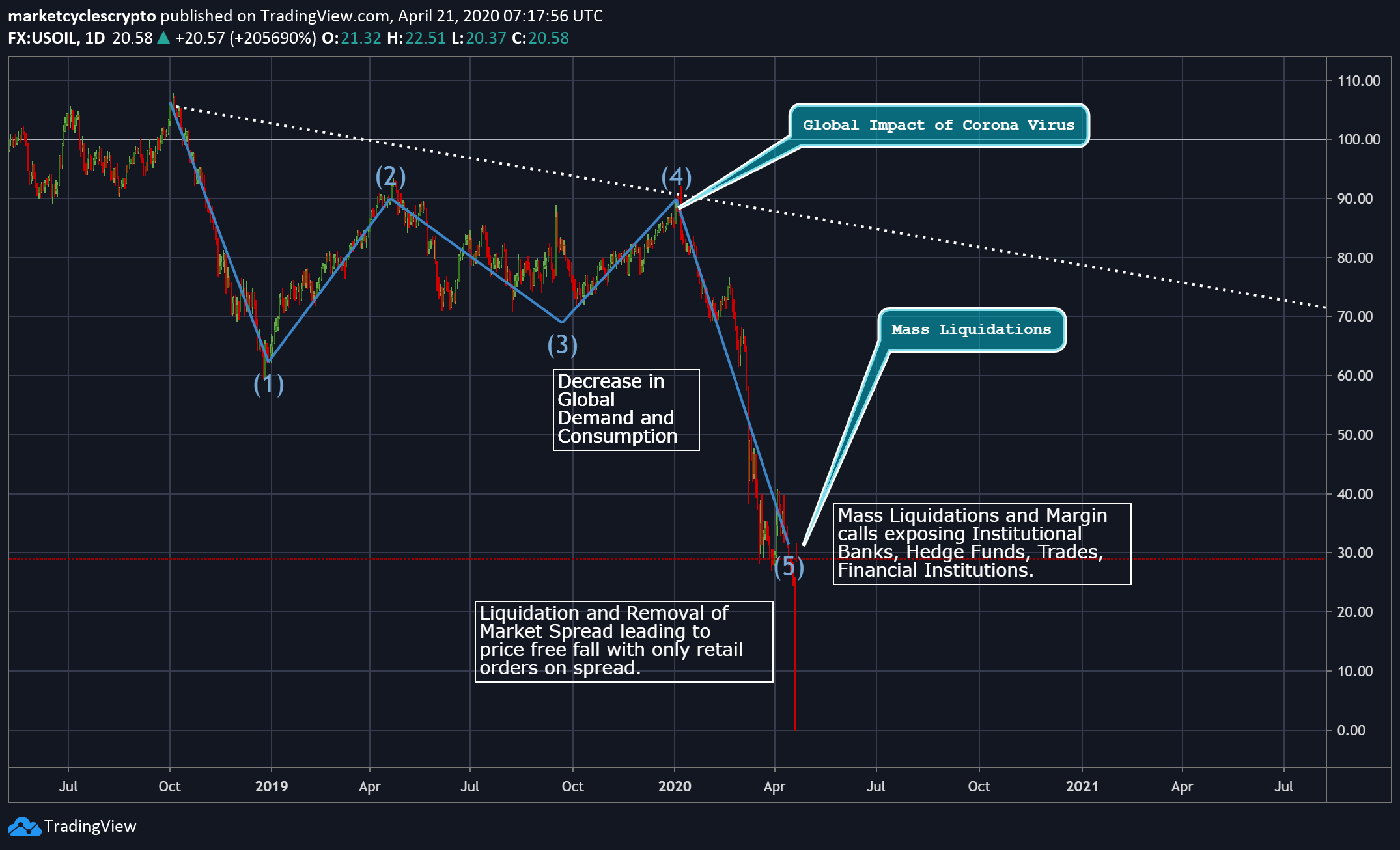 The correlation between Bitcoin and oil:

Even though the correlation index between Bitcoin and oil is slow, both of the commodities have a similar market structure, where Bitcoin experienced a parabolic advance in 2017 due to an increase in media attention, due to the ICO rush. After that time, Bitcoin has largely been traveling in a downtrend channel breaking the momentum and rallying due to fundamental time to time. 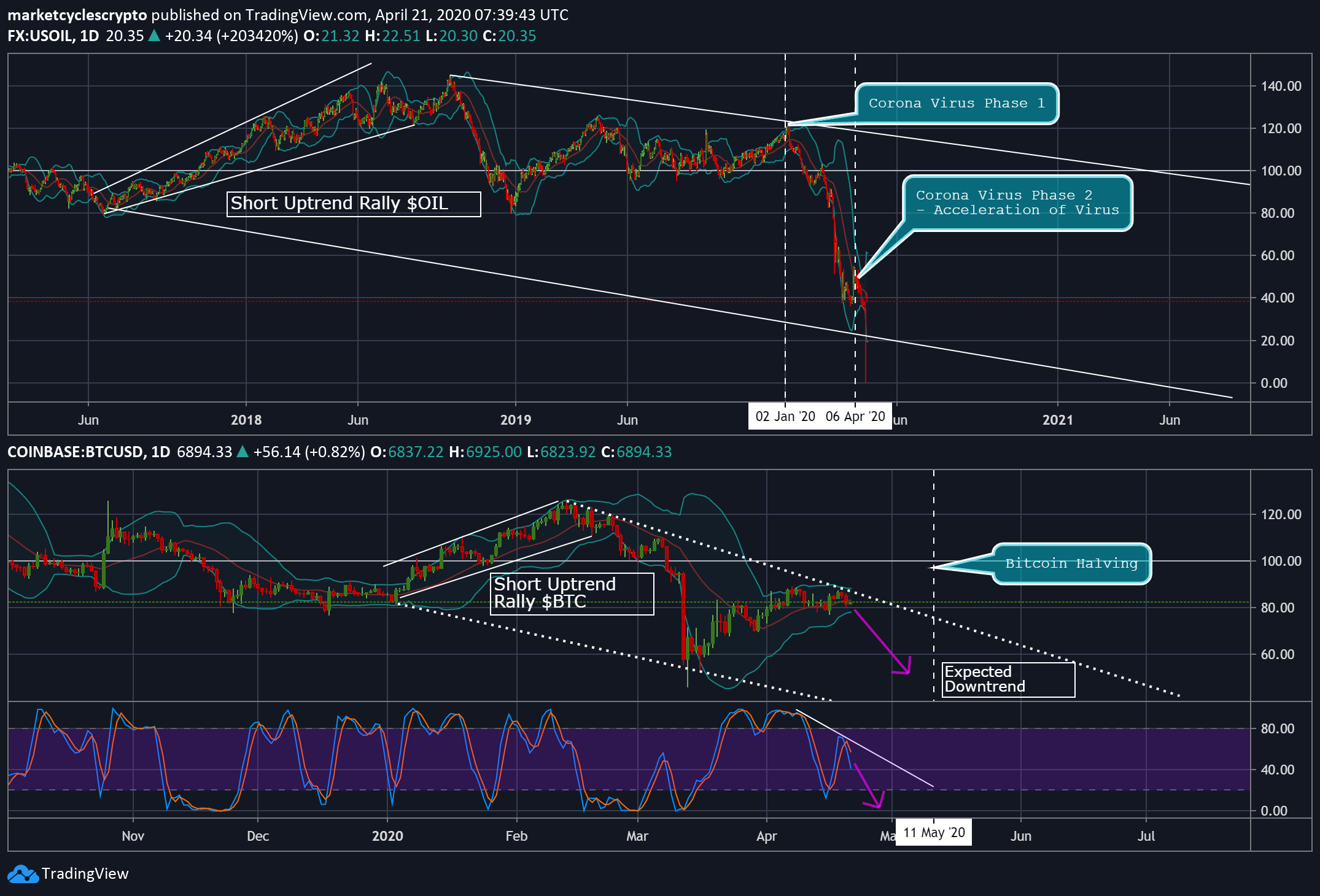 Even though we know that Bitcoin halving is right around the corner, the technicals are indicating a steep downturn is possible with the RSI trending towards 0, which represents that the price is overbought and will trend downwards. BBands is also tightening and trending in towards a downward momentum. It is highly unlikely that the blockchain market will face an upturn where there is no economic recovery or rally in the world and people are living paycheck to paycheck. Even though Bitcoin halving is a strong fundamental what is happening around the world negates its benefits as Bitcoin is a high-risk asset class and investors are wary of taking any investment decisions when a global recession is right at the doorstep.

Further, it is highly unlikely that money from the equity markets and the oil market will move towards Bitcoin and other cryptocurrencies as the institutions are cutting down risk and taking what all they have. Furthermore, retail investors are also personally affected by the lockdown and allocating resources to Bitcoin and cryptocurrencies ignoring that they would need money in the coming months for survival is highly unlikely.

The analysis provided by the author is purely educational in nature and does not continue any legal, investment, financial, or trade advice. Please do your research before investing or taking any financial decision.