Different Layer 1 blockchains are created to serve different goals. Bitcoin was designed to be a currency for simple, trustless transactions with enforced scarcity to preserve its value. However, its relatively simple structure limits what can be built on top of it. 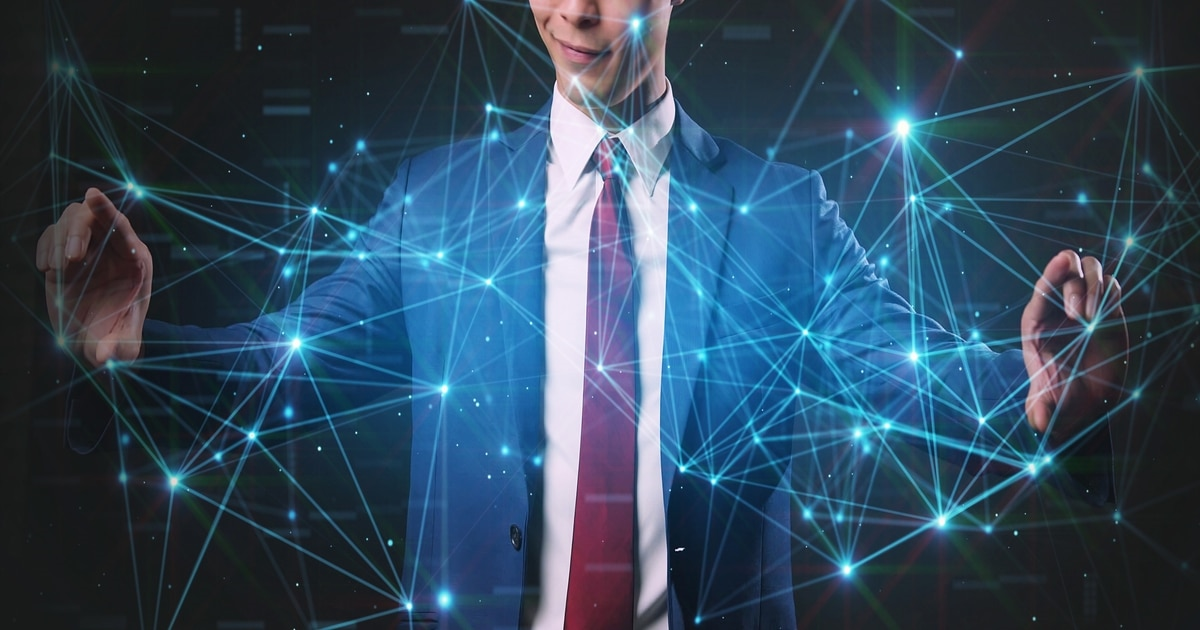 Ethereum was the first mainstream blockchain to incorporate smart contracts, and it hosted the first wave of dApps and tokens that ushered in DeFi and Web3. But its Proof of Work (PoW) mining system and high gas fees have been an impediment to transaction speed and scalability within its DeFi ecosystem.

Since then, many smart contract-enabled Layer 1 blockchains developed were created to address such problems. For instance, Solana and Algorand leverage a Proof of History (PoH) and Proof of Stake (PoS) consensus mechanism, respectively, in order to provide lower fees and faster transaction times.

Other Layer 1 blockchains, such as Avalanche, are built more for interoperability with other chains.

Such developments have made several new Layer 1 blockchains emerge to gain their own place in the growing web3 ecosystem, majorly driven by a demand to address Ethereum’s scalability, speed, and fees problems.

But questions remain. While many of the new Layer 1 blockchains have attracted significant investment and user bases, will any of them surpass Ethereum in adoption? Analysis by Chainalysis, a major blockchain data and analysis firm, tried answering such questions.

The firm first started examining which blockchain has the most active users. The firm approximated that by comparing the number of unique wallets sending each currency to services over time. 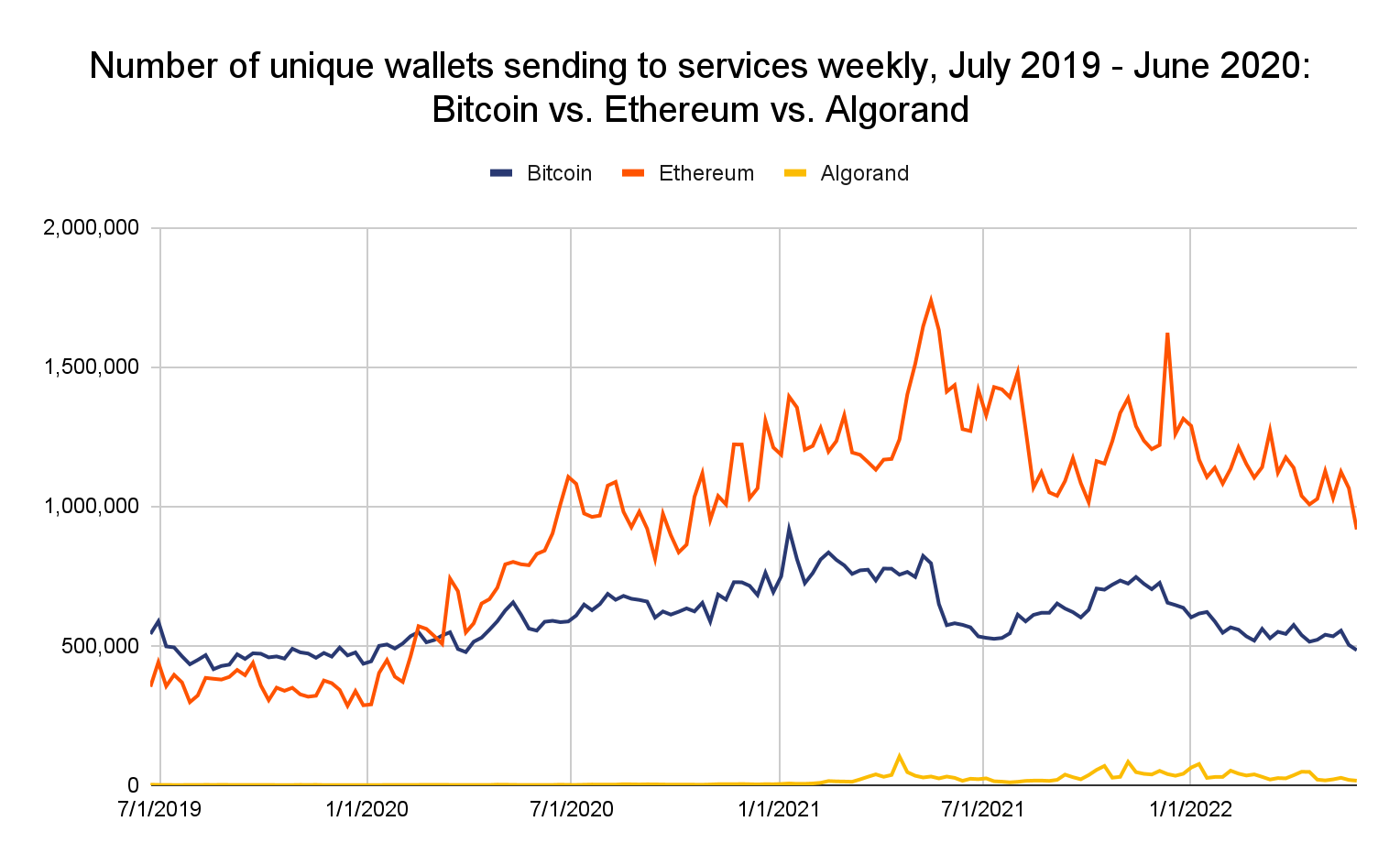 According to the company’s analysis, Bitcoin appears to have led in unique users until March 2020, at which point it was overtaken by Ethereum. That coincided roughly with DeFi growth, as the increase of DeFi prompted the creation of many services that accepted Ethereum and other tokens built on its blockchain.

On the other hand, Algorand showed that it has yet to achieve such comparable adoption. Based on a one-week bull market, Algorand had 103,000 active wallets, compared to 1.7 million for Ethereum, and 916,000 for Bitcoin.

As can be seen above, all three cryptocurrencies saw sometimes coinciding swings in active wallets throughout 2021 and 2022 to date. Overall though, each blockchain’s growth in transaction volume wasn’t correlated with the others for the most part. 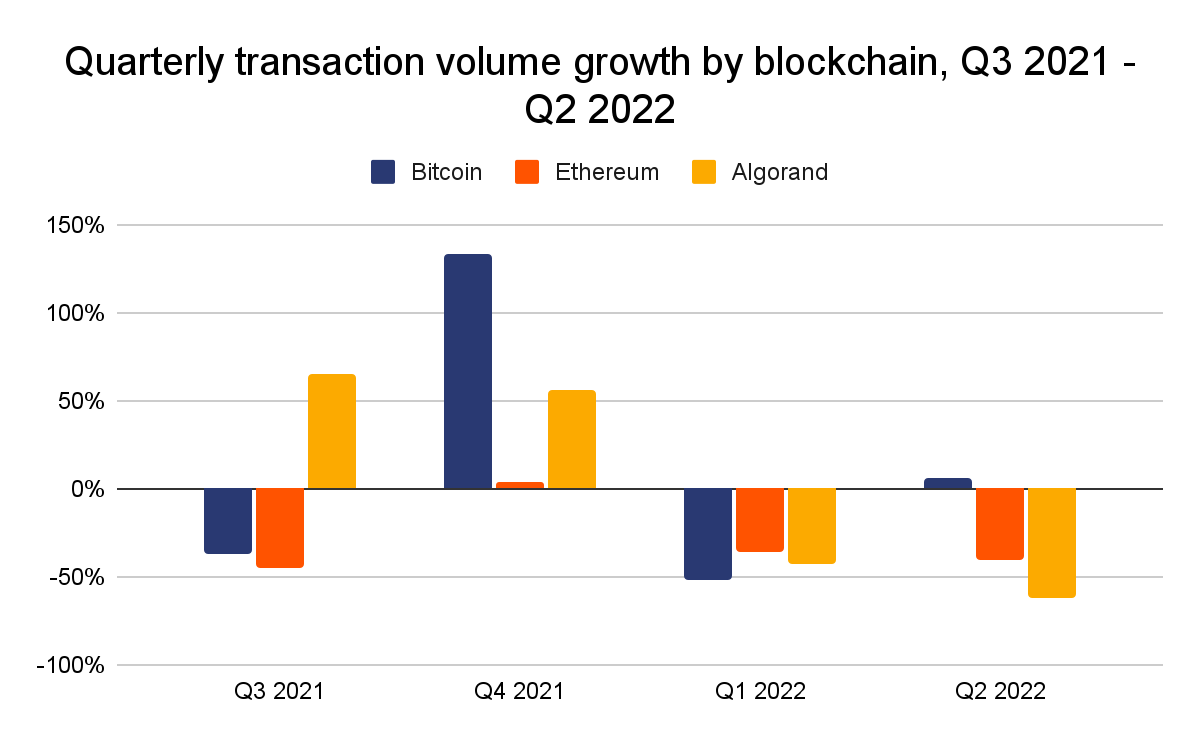 As it can be seen during Q3 2021, Algorand saw its transaction volume grow 65%, while Bitcoin and Ethereum saw volumes drop 37% and 45% respectively. This may have reflected Algorand’s growing hype. Having launched in April 2019, Algorand was a relatively new blockchain and reached an all-time price high in September 2021.

All three cryptocurrencies lost significant transaction volume in Q1 2022, but only Bitcoin grew in Q2, which saw steep declines possibly signifying another crypto winter. That may reflect Bitcoin’s perceived status as a relatively safe coin compared to Algorand, given that the latter is a relatively new asset.

Analysis by Chainalysis further shows that Ethereum stands out as the cryptocurrency with the most institutional dominance. 40% of its total transaction volume comes from large institutional transactions, compared to just 30% for Bitcoin and 29% for Algorand. 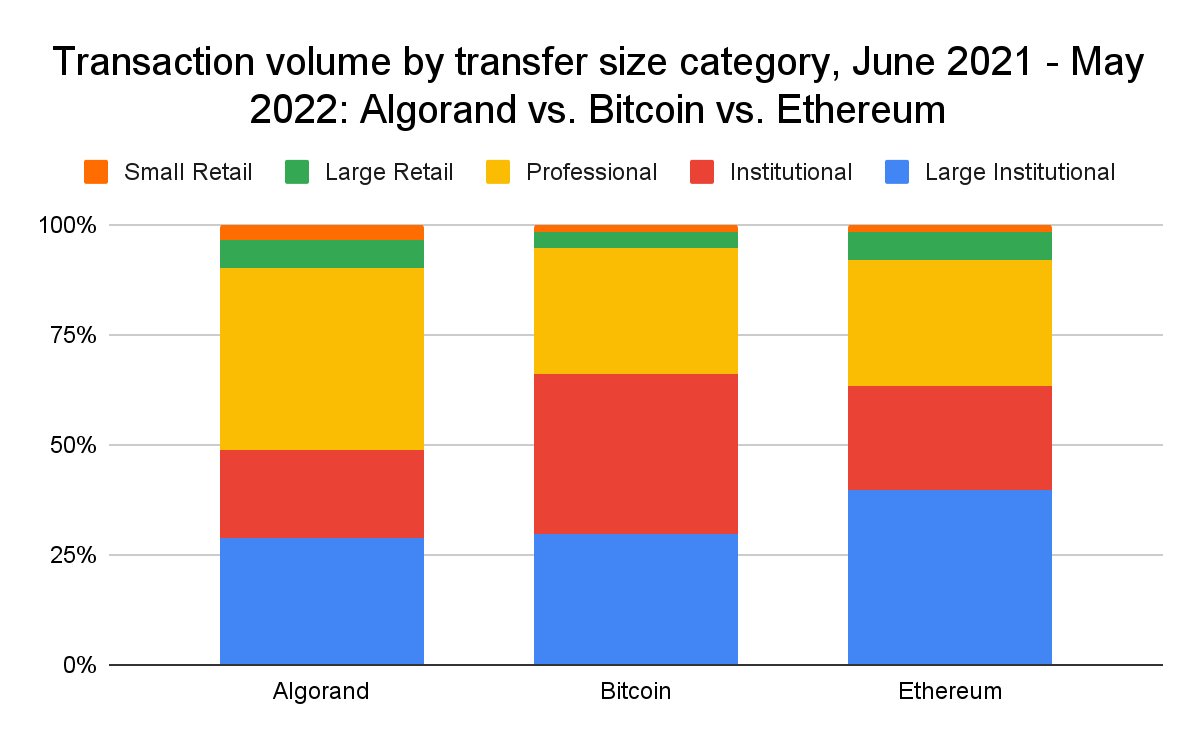 From another perspective, 10% of Algorand’s transaction volume comes from retail or large retail transactions, compared to 5% for Bitcoin and 8% for Ethereum. Again, this likely reflects Algorand’s status as a relatively new blockchain. It may also signify that Algorand is succeeding in its goal of enabling a high volume of smaller transactions. 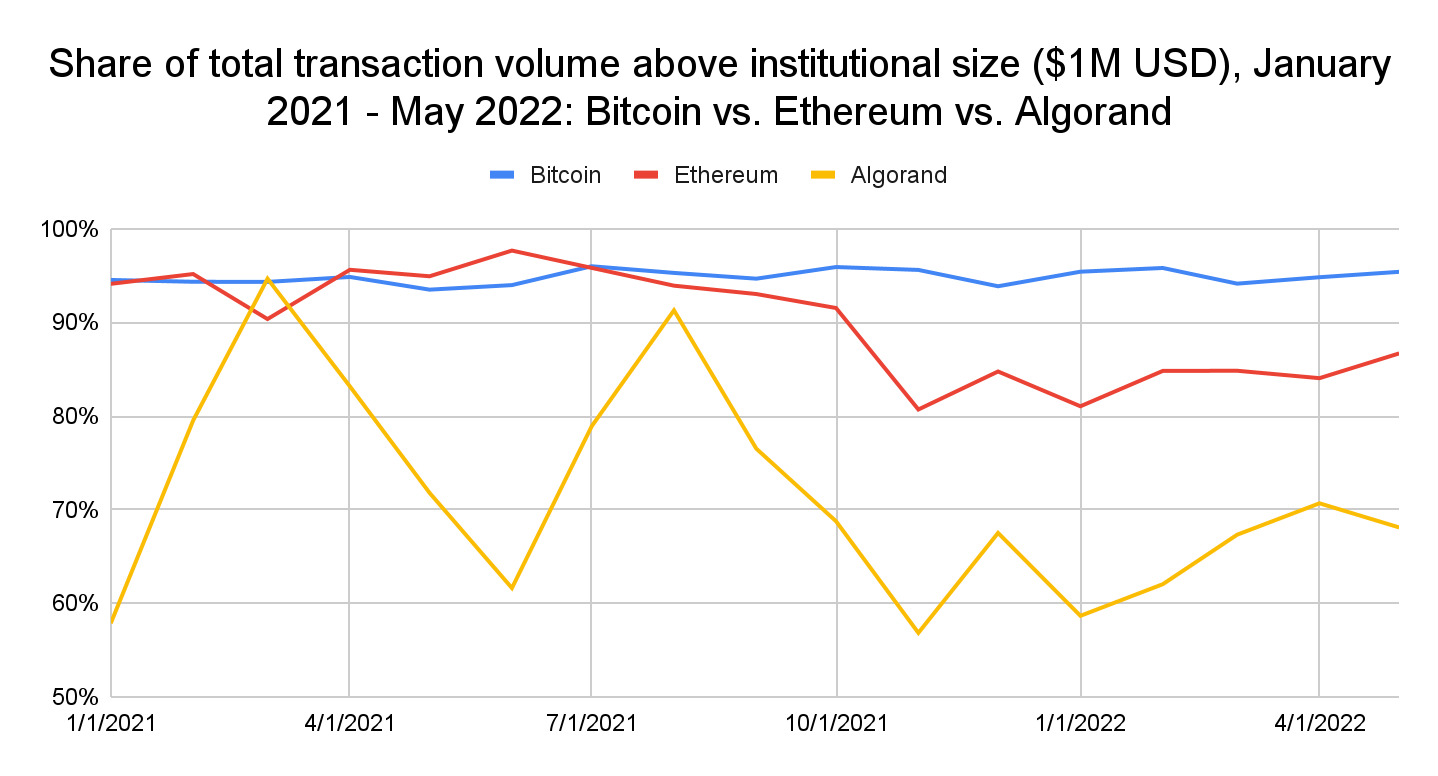 However, the rise of DeFi 2021 appears to have sparked a massive increase in investor sentiment for Ethereum relative to Bitcoin. Ethereum’s price appreciation versus Bitcoin more than doubled over the course of the year, as total transaction volume skyrocketed to $4 trillion, compared to just $454 billion in 2020. 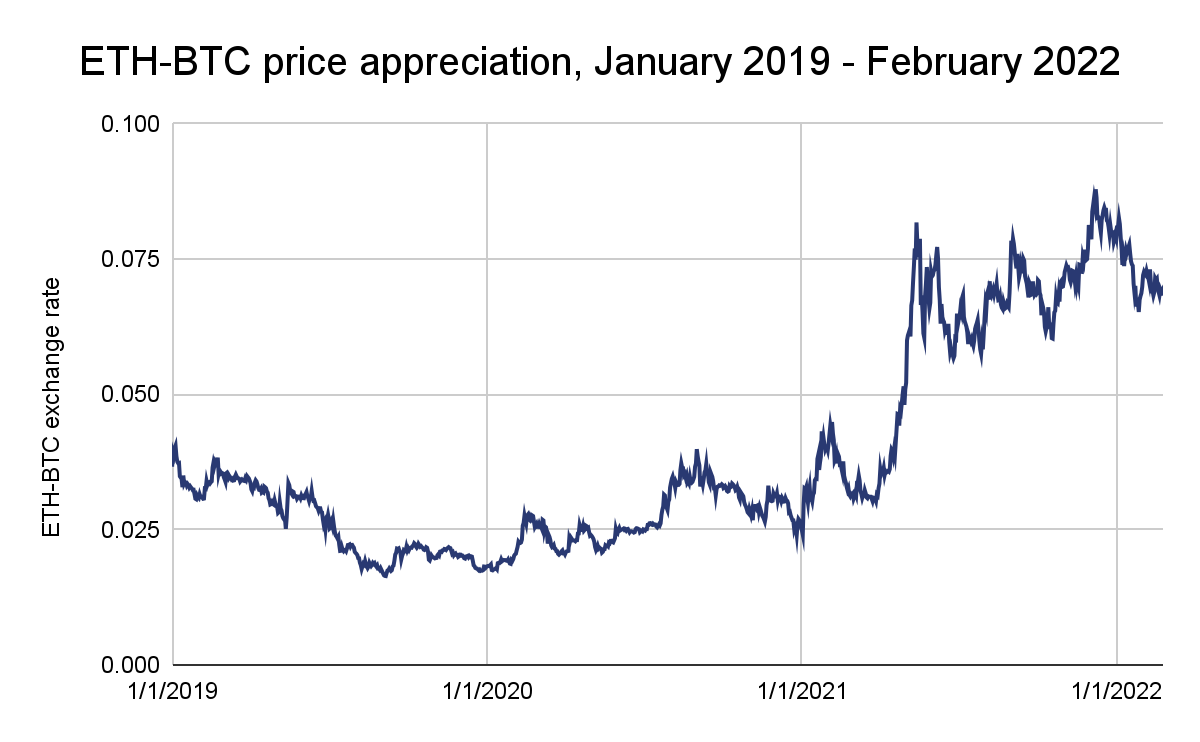 That speaks to the power of web3: Smart contract functionality has created new use cases for Ethereum, leading to significant increases in usage, and investors have taken notice.

Many new Layer 1 blockchains perceived to solve Ethereum’s problems have been billed as “ETH killers” and considered to replace the second-most popular cryptocurrency as the go-to for web3 and DeFi, but so far, none have been able to do it.

Ethereum is still far ahead in transaction volume, especially in popular areas of web3 like NFTs. The Ethereum Foundation is working with miners to implement changes to address its issues, such as its upcoming switch to a PoS consensus mechanism.

Its entrenched status as the number two blockchain behind Bitcoin is already allowing Ethereum to fend off competitors. Therefore, no other smart contract-enabled blockchain will challenge it even if the above-highlighted issues are solved.

With a possible crypto winter appearing in place along with improvements to Ethereum, it is possible that investment in alternative Layer 1 blockchains will slow down, and that Ethereum remains the dominant player and a winner-takes-all in the web3 market.

DeFi was the Main Trigger of Bitcoin Flowing to Ethereum, ETH Price to Surge Even Higher