Turkey Leveraging Blockchain to Break US Dollar and SWIFT Dominance

In an effort to break economic ties with the United States and escape the US Dollar dominance of the global markets, Turkey is adopting blockchain and cryptocurrency at a greatly accelerated rate.

As Turkey’s economy teeters on the edge of a potential recession, the people and the government in the nation are seeking alternative solutions in Bitcoin, cryptocurrency, and blockchain. 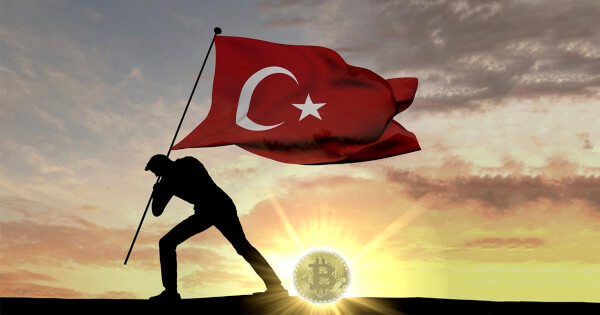 According to a recent article by Forbes, Bitcoin, and cryptocurrency adoption is on the rise in Turkey as the nation’s economy hits a state of free fall. Turkey’s financial reserves have been depleted and there is rising economic tension with the US—sending the Turkish Lira to the lowest level in its history.

Turkey has dramatically increased resources directed towards the development of blockchain infrastructure and cryptocurrency technology to save the economy from recession. Along with experimenting with a Central Bank Digital Currency (CBDC), Turkey is investing in blockchain research, encouraging youth education into blockchain tech and giving more support to tech startups—all in an attempt to save the economy without relying on external resources and the United States' support.

Turkey’s interest in blockchain and a fast transacting CBDC is due to their reliance on SWIFT remittance.

More than 10,000 financial institutions and corporations in over 200 countries use the Society for Worldwide Interbank Financial Telecommunication ("SWIFT") to execute international money transfers, making it an integral part of global cross‑border banking transactions. Aksoy explained, “3-4% of all countries’ GDP is being wasted on transaction costs and banking intermediaries. Cryptocurrency technology will cut these costs and reduce our reliance and dependency on other nations. Turkey now has a real shot at saving its economy.

As a consequence of Turkey’s reliance on SWIFT for remittance, the government is creating large scale blockchain infrastructure and developing their own central bank digital currency.

Blockchain-based systems hold a unique advantage over SWIFT which is a centralized service, while a blockchain is decentralized. This matters significantly because, in the case of SWIFT, you must rely on centralized financial institutions for every payment or transaction, which means that all transactions incur higher fees as the money must first be sent through the centralized system and then on to the recipient. In addition, as each transaction must be verified by the central authority, SWIFT payments can take days. Blockchain potentially enables safer, faster, and cheaper transactions.

In addition, the Turkish government is exploring CBDCs while also investigating potential membership of the Russian version of SWIFT, known as SPFS. New tech like blockchain and cryptocurrencies naturally are being looked at simultaneously. Despite traditionally having strong ties to the United States, the government is now showing some real aggression—making it known that there are other ways for them to do business. Turkey now realizes the strategic significance of their country in the global market and are making a stand against the US influence on their sovereignty.

Aksoy shared his belief that blockchain and cryptocurrency can help both the government and the Turkish people find a united path forward, one which can be mutually beneficial. He said, “This isn’t a quick make money scheme. It has the potential to protect the people and the wealth of the nation if implemented and welcomed with open arms.”

Turkey’s Population is Ready for Crypto

Over the last year, relations between the US and Turkey have dropped to an all-time low. Although the two countries have been NATO allies for nearly 70 years, that partnership has greatly deteriorated mainly over security concerns and the impact of the Syrian War.

A 2019 survey conducted by the Pew Research Center showed 73% of Turks had a negative view of the United States, with only 20% having a positive view, the lowest among countries polled. The same study also showed only 11% of Turks had confidence in the current US leader, President Donald Trump, with 84% having no confidence in him.

Moving away from SWIFT and the US dollar is the most effective and potent way for Turkey to destabilize the United States’ influence in the region and the population are ready. Turkey has evolved into a thriving crypto-friendly nation and a theater of commerce for exchanges and blockchain businesses.

Turkey has a young population with a median age of around 30 years, so adoption of new tech is higher than most of Europe. More than 90 percent of adults have a smartphone and mobile internet users are north of 50 million. As such, Turkey’s population is a part of the rapidly growing cryptocurrency adoption.

In a recent interview with Ciara Sun, Head of Global Business Development & Partnerships at Huobi Group, was amazed at the rate of adoption and potential for cryptocurrency to thrive. Sun remarked, “We are 100% confident in Turkey—Turkey is a really great market. I was really surprised to discover that 20% of the population owns cryptocurrency, and the Lira is the fifth most popular fiat currency for crypto pairing in the world.”