Cisco Blockchain: The Strategic Implication that You Should Know

Institutions are exploring the use of blockchain in supply chain industry as the cost savings brought by blockchain can potentially bring new business value of $3 trillion by 2030. Cisco recently announced the launch of its own blockchain, an enterprise blockchain solution targeting supply chain, internet of things (IoT) and smart cities applications.

We foresee that enterprises will adopt Cisco’s blockchain solutions into supply chain operations in the near future. The use of blockchain generates an automated level of trust among different parties. In the context of supply chains, blockchain enhances data transparency of the product’s full logistics cycle, as well as its operating and maintenance conditions in real time. Such enhanced level of transparency is estimated to bring 15-30% cost savings in the shipping industry.

In addition, we believe the identity and policy layer in Cisco’s blockchain can mitigate the risks of counterfeiting. This layer enables enterprises to detect counterfeited imports and authenticate the identity of millions of IoT devices. While the OECD and the EUIPO stated that the value of counterfeited goods reached US$ 500 billion in 2016, we believe this value will drop drastically with the advent of blockchain. Leaders in the supply chain industry are leveraging blockchain in detecting counterfeited goods, and the most recent example being SAP’s partnership with Bumble Bee Foods to trace the logistics of yellowfin tuna. 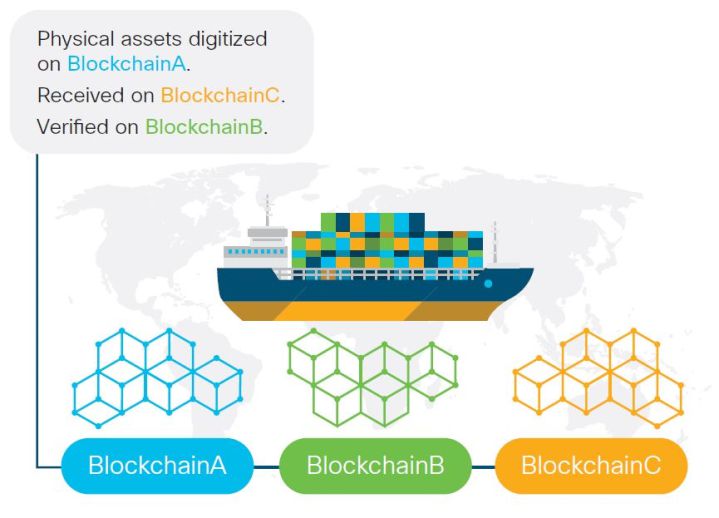 It is noticeable that the current blockchain application in supply chain industry are mostly related to product tracking and detection of counterfeited imports. We believe that once blockchains are interoperable to each other, this means the value is unlocked as data can be transferred freely across one blockchain to another. The unlock of value not only includes data, but also inherent currency like Bitcoin and security tokens. From a broader perspective, these cross-chain data as a whole are more valuable to enterprises as it facilitates data communication among different enterprises on the blockchain. In addition, data monetization can be a new revenue stream for enterprises when blockchains are interoperable. Enterprises will be able to monetize the utilization of idle assets and data through marketplace to enhance operational efficiencies. However, we are not there yet as interoperability remains the key challenge of blockchains. We shall wait and see!

2.      Are Blockchain and the Internet of Things Made for Each Other? – By the Boston Consulting Group and Cisco